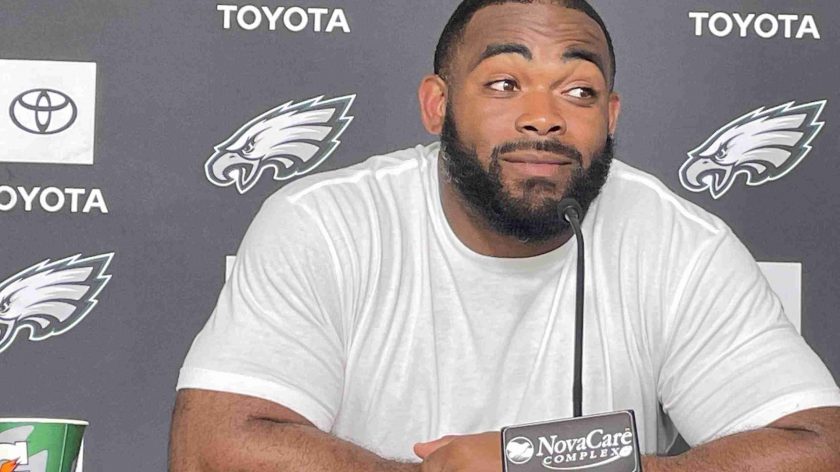 PHILADELPHIA – Few expected the embattled Derek Barnett to be back with the Eagles this season but the much-maligned edge rusher didn’t find the market he expected in free agency and Howie Roseman was happy to bring the 2017 first-round pick back in the fold on a team-friendly deal that basically amounts to one year and $5.5 million.

“I think going into free agency, he probably thought a little differently about where he would be,” Roseman admitted to reporters back in March at the league meetings.

Everything in life is about timing and circumstance and if Barnett was able to get real money over multiple years or even eight figures on a prove-it deal, the Tennessee product would likely be preparing to play elsewhere in 2022.

Now he’s back under the assumption of a reduced rotational role behind the team’s other top pass rushers: free-agent pickup Haason Reddick, the emerging Josh Sweat, and the returning Brandon Graham.

And Barnett as the fourth man in a rotational pass rush seems pretty good on paper.

“Ever since I got here, I see the same guy every single day that’s determined every day to get better at his craft,” head coach Nick Sirianni said earlier this spring. “Derek is obsessed with football and trying to become the best player that he can. I really appreciate that with him. He works hard in the classroom, the weight room and works extremely hard on the field.”

Sirianni expects the consistency of Barnett’s approach to ultimately pay off.

In many ways, Barnett is the victim of the expectations of the fan base and that’s part of the gig when you are the 14th overall pick. Had Barnett been chosen in the third round for instance he’d be considered a valuable piece of the puzzle and a Roseman “hit” as a draft pick.

However, when the hype is that you have the bend comparable to Von Miller, as Lane Johnson once said, or that you broke all of Reggie White’s sack records at Tennessee, more is expected than 21 1/2 sacks over five seasons. Add in the reputation of a penalty-prone hot head and you had many more advocating for an outright dismissal than the logic of a really talented safety net.

As a so-called late-bloomer himself, Graham often cautions those who have written off Barnett.

“Me and DB talked, and he didn’t want to leave here with a bad taste with the fans,” Graham said. “He doesn’t want the fans to think he couldn’t play at a high level consistently. I think for him, he has unfinished business.”

And clearing up that unfinished business is going well, according to B.G.

“It’s funny I just talked to him to tell them how proud I was of him today,” Graham told JAKIB Sports on Friday. “I can see that chip on his shoulder. I can see him just working the details even more than what he’s been doing because I mean I just felt like it just didn’t happen for him yet like he wanted to but I think this year he’s gonna really have a big year.”

Barnett doesn’t even turn 26 until later this month so those who’ve already moved on might want to press pause.

“In film [sessions] coach [Jeremiah Washburn] is always talking about what a good job [Barnett is] doing,” Graham said. “[On] certain drops that we’ve got, certain positions that they’ve asking him to be in. I think he’s just trying to prove to everybody that the Eagles drafted him for a reason and that reason is gonna show up this year.”