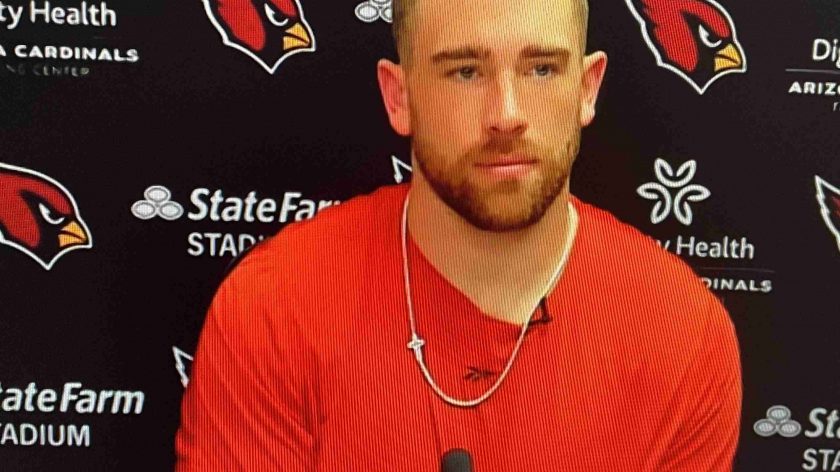 Zach Ertz still loves Philadelphia, so much so that his charitable foundation still makes the city a priority, but the veteran tight end admitted the final 18 months of his football life with the Eagles weren’t easy.

Speaking with reporters in advance of Sunday’s matchup between the 4-0 Eagles and the 2-2 Arizona Cardinals, Ertz alluded to the issues that ended his time with the Eagles but took the high road in doing so.

“The last 18 months in Philly weren’t the easiest,” Ertz told JAKIB Sports via conference call on Monday. “Obviously, there was a lot going on behind the scenes, a lot of people don’t know about it. But at the same time, I loved all my time in Philadelphia.”

Although the Eagles are no longer a part of Ertz’s life, the city that loved the player is never taking a backseat

Ertz’s mother still lives in the area, his brother attends Temple while his sister-in-law is a Drexel Dragon.

“I was there for 8 1/2 years, nine years essentially, and I really felt like we grew up there,” he said. “Julie [Ertz] and I, we came there as 22-year-old kids and gave everything we had to the city and we felt that love and passion reciprocated each and every day and we just felt such a connection to the fans and the community, you can’t really put it into words what that city means to us today.

“It will always have a special place in our hearts, even though we’re in Arizona now.”

The landing spot was a good one for Ertz, a playoff-level team with a good young quarterback in Kyler Murray plus his wife is from the area and Erz himself made connections out there while rehabbing from previous ankle surgery.

“The transition has been amazing,” he said. “Obviously, Julie is from Arizona, so it’s been to be out here with her family. My mom will eventually move out here. And I love playing for Coach [Kliff] Kingsbury. It’s been a blessing to be out here in this building. It’s a lot of fun. We’ve got a young, talented team. I’m excited about the future here.”

From a football standpoint, Ertz is still very close to the veteran core of the 2022 Eagles team.

“I’ll never have a bad memory about my time there, and a lot of it is down to guys like [Jason] Kelce, Lane [Johnson], B.G. [Brnadon Graham], Fletch [Fletcher Cox], the guys I spent eight, nine years with, we had some good years and we had some great years, in particular the one [Super Bowl season in 2017),” he said.

An all-time Eagles great Ertz was in the no man’s land that is often difficult in the world of professional sports. He had produced and given everything to the Eagles but the organization [correctly] made the difficult decision that Dallas Goedert was the future at tight end and with the money that it was going to take to lock up the younger Goedert long-term it just wasn’t feasible to also pay Ertz his market rate.

From the player’s perspective, however, it seemed like disrespect because it was Ertz that set the NFL single-season reception record for TEs that still stands today with 116 in 2018 and it was the former Stanford star who risked his health by playing in the 2019 playoffs with a lacerated kidney and two non-displaced rib fractures.

“I’ve said all along I want to be here for the long run,” Ertz said when it became clear contract negotiations had stalled. “I don’t know for sure if that feeling is mutual.”

By September of 2020, an NFL Network report of Ertz yelling at GM Howie Roseman at practice emerged and many took that baton in the wrong direction assuming Ertz’s angst was contract related. An NFL source later clarified that Ertz and Roseman weren’t on the same page on rehab issues.

Rumors of potential trades same and went and Ertz surprisingly remained for the dawn of the Nick Sirianni era, a coach who prides himself on connecting with players, and to his credit the Eagles coach did exactly that with Ertz even though everyone knew the veteran was a lame duck.

“I really enjoyed Nick,” Ertz said. “Obviously, he and I were put in a tough spot, and I thought we really made the most out of it. “I got to know him extremely well, I think he went out of his way to make me comfortable going through everything I was going through that summer.”

Sirianni likes to spend time with his veteran players during stretching periods before training camp practices and Ertz was always one of his regular stops. The current Eagles coach made a lasting impression on Ertz to the point the tight end thinks about some of Sirianni’s methods if and when he wants to get into coaching.

“The thing that I really liked about Nick was how detail-oriented he was,” Ertz said. “We used to watch film of practice, a couple plays every day, and if you had a bad rep your number would be on the screen, and I absolutely hated when I saw 86 on the screen, and it motivated me every time went on the practice field to make sure my negative wasn’t in a negative light.

“So there were just little things like that. I felt like he does a really good job relating to guys, connecting with guys. I have a lot of respect for coach Sirianni.”

In his stretch run with the Eagles in 2021, Ertz finished with 18 receptions for 189 yards and two touchdowns before being traded to Arizona for then-rookie cornerback Tay Gowan and a 5th-round pick.

Gowan was waived at the cut to 53 back in September and is now on Minnesota’s practice squad while Roseman traded the pick he got for Ertz to Jacksonville for a pair of sixth-round picks, one of which Philadelphia used to select tight end Grant Calcaterra, ironically an Ertz-like prospect from a traits standpoint who is more flex receiver than blocker.

In his first full season with the Cards, Ertz is again producing, piling up 22 receptions in four games, No. 3 among all NFL tight ends.