Who Returns Punts for the Eagles? 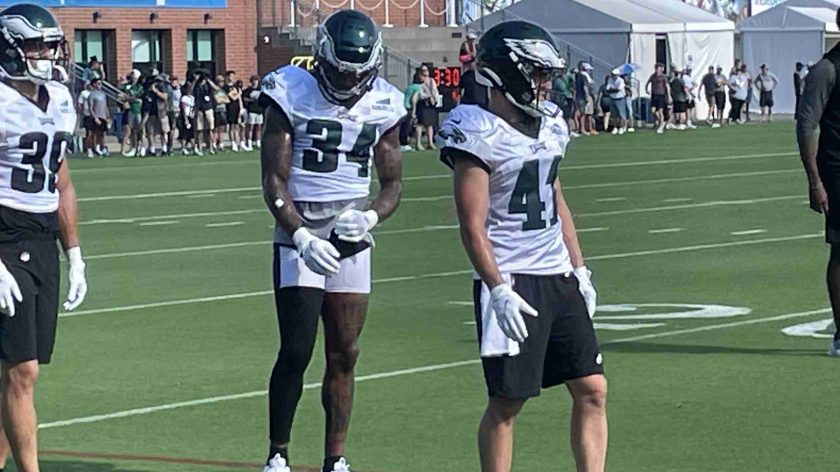 PHILADELPHIA – Be careful what you wish for.

Most Eagles fans had so soured on Jalen Reagor that they wanted Howie Roseman to do anything to get the failed 2020 first-round pick out of town.

Anything turned out to be more than expected as the Eagles’ GM flipped the embattled receiver to Minnesota, where he will ironically play second fiddle to Justin Jefferson, the superstar picked right after Reagor in that 2020 draft. The return was a 2023 seventh-round pick and the curiously worded conditional fourth-round pick in 2024 which can de-escalate if Reagor doesn’t hit certain statistical benchmarks with the Vikings.

Minnesota, meanwhile, acquired Reagor to be its WR4 and punt returner. Had he stayed in Philadelphia he would have started as the WR5, the punt returner, and perhaps the kickoff returner.

The Eagles’ roster is now at 53 after the team was awarded second-year running back Trey Sermon off waivers from San Francisco and there is no clear choice to pencil in for Reagor as the punt returner.

Coach Nick Sirianni didn’t offer much clarity on the issue prior to Thursday’s practice, although he may have foreshadowed the ultimate decision by focusing his comments on the expanded 70-man roster, which includes the 17-man practice squad (the Eagles have one extra member because International Pathway Program player Matt Leo gets an exemption).

“We have 70 guys at our disposal,” Sirianni said. “We feel like we have good options. … We’re not playing tomorrow, so we don’t have to make that decision quite yet.”

The easier answer would be elevating undrafted rookie Britain Covey, a tremendous punt returner in college at Utah who is very sure-handed even if the explosiveness he showed with the Utes didn’t translate immediately to the pro level judging by training camp and the preseason.

As far as players on the actual 53, the best bet would be backup RB Kenny Gainwell, who began to field punts in the latter days of camp but didn’t exactly seem comfortable at times while doing so. Boston Scott has also had a little experience but hasn’t been seen working with the PRs while Quez Watkins seems like a popular man outside the building but the WR3 wasn’t effective as a kick returner last season and punts are generally more difficult from both ball-security and decision-making standpoints.

“When you work a guy, just like at any position, you get multiple guys ready throughout not just the week of the game but throughout an entire training camp, throughout OTAs,” Sirianni said. We feel like we have some good options there.”

Fans who remember the 2007 Eagles might be hand-wringing a bit. The plan was to have Jeremy Bloom be the punt returner but the former Olympic skier didn’t show enough in camp and was waived before the season-opener against Green Bay.

With no experience, WR Greg Lewis was thrown into the deep end of the bull and a muff led to a Packers touchdown in the first quarter. The game was nip and tuck form there, tied 13-13 with 59 seconds remaining in regulation when the decision was to trot out safety J.R. Reed to field a punt. Reed mishandled it and the Packers recovered, going on to win on a 42-yard Mason Crosby field goal in the waning seconds.

Neither Lewis or Reed had ever fielded a punt in an NFL game before that day.

Sirianni was the WR coach at IUP at the time but you can bet he’s heard the story a time or two since the Reagor trade.

The Eagles have put special teams coordinator Michael Clay behind the 8-ball with less than two weeks before the regular season.

It’s no longer about splash player or explosion on punt returns for the Eagles, it’s about competency and Covey is the obvious path to that and the one Philadelphia should take in the short-term