Trey Sermon ready for first opportunity with the Eagles 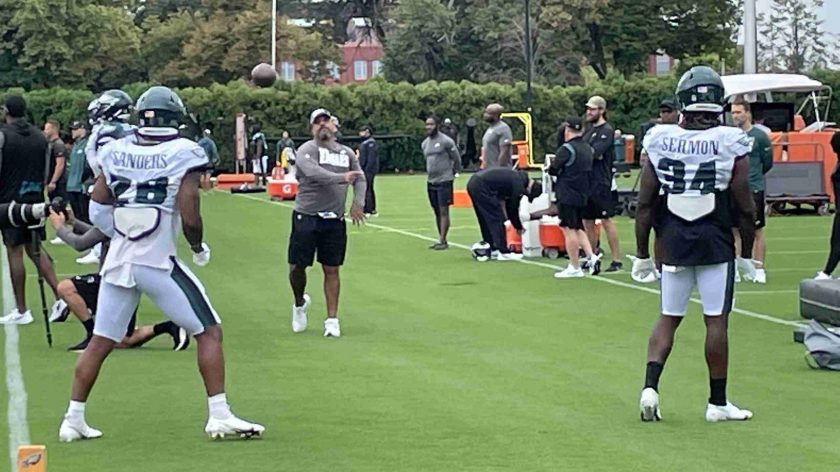 PHILADELPHIA – Trey Sermon – Taking flyers on some young, talented prospects from the 2021 draft who didn’t necessarily hit the ground running in their original cities was a bit of a theme for Howie Roseman late in the summer.

First, it was quarterback Ian Book, a fourth-round pick of New Orleans in 2021 at No. 133 overall, who was claimed off waivers as an upgrade over Reid Sinnett.

A day later it was Trey Sermon, the 88th pick in the third round, claimed off waivers from San Francisco as a better alternative to Jason Huntley or undrafted rookie Kennedy Brooks, and finally, Janarius Robinson, who was selected one spot behind Book by Minnesota and plucked off the Vikings practice squad as a roster replacement for the injured Derek Barnett.

Sermon is the first of the trio who figures to get an opportunity after Boston Scott was ruled out of Sunday’s game with Jacksonville due to a rib injury.

Over the first three games, Scott was the RB3 behind Miles Sanders and Kenny Gainwell, playing in 16% of the team’s offensive snaps with a high-water make of 21% in Week 2 against the Vikings and a low of 10% (7 snaps) against Washington last Sunday, which may have been off a bit after Scott was banged up. Overall, Scott has had 11 touches (10 running, some in high-leverage situations in the fourth quarter against the Lions, and one receiving).

Everything is a small sample size this early in the season but if you take Scott’s work against Detroit (14 reps) and Minnesota (15) that’s probably the playing time up for grabs this Sunday against Doug Pederson and Jacksonville.

Nick Sirianni and Shane Steichen could either split that work between Sanders and Gainwell or simply insert Sermon into Scott’s role to get a look at what is a talented back who could offer something the Eagles’ offensive is missing as a true between-the-tackles runner.

“I’m really excited. I know they brought me here for a reason,” Sermon told the Eagles website. “… I’ve been caught up to speed and getting the reps in practice, getting more comfortable with the offensive linemen getting in sync. It’s been good for me.”


Sirianni also addressed where Sermon is when it comes to learning the offense.

The head coach noted that he’s tweaked the practice schedule to get players on the back end of the roster a little more work.

“One thing we’re doing this year, that’s really helped is there’s an additional [practice] period this year,” Sirianni said. “We always know we have the developmental period at the end. … [It’s] another attempt to develop young players and to develop guys that weren’t here with training camp, stuff like that, kind of like we did with Gardner Minshew [last season].

“We’re doing a walk-through, a developmental walk-through before each walk-through to get those extra eight reps there. Then we’re also doing a twos versus ones, ones versus twos in practice where we’re actually running our plays versus the defense and vice versa. Those reps add up.”

Sanders, though, was on the injury report earlier in the week with a hip issue so keeping the lead back on a pitch count is the prudent way to go and it sounds like Sirianni wants at least a nominal look at what he has in Sermon.