The Washington Commanders burst the Eagles’ bubble, 32-21, for their first loss this season 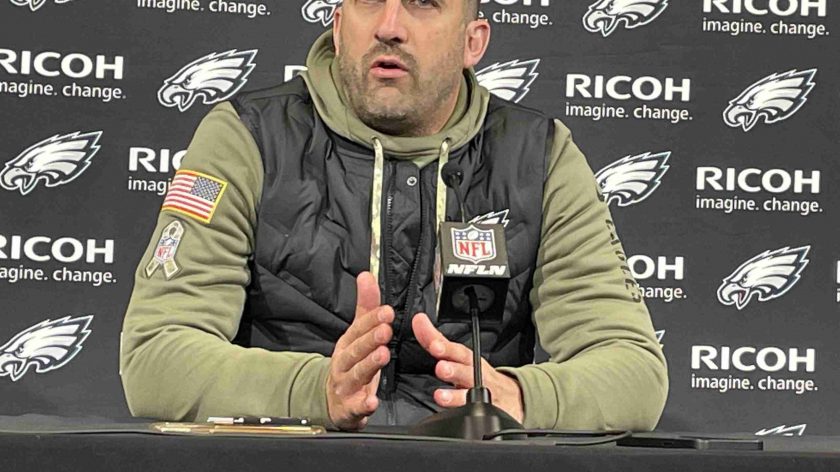 He wasn’t jolly, jovial Nick Sirianni this time. The Eagles’ head coach angrily grabbed his headset with his right hand and tossed it to the ground as he walked off the field at the end of the first half Monday night. If Sirianni could, he would have thrown the headset halfway to Mars he was that livid.

He had a right to be.

Sirianni saw his team outplayed, outhustled, outcoached, outgained, out everything, losing to the Washington Commanders, 32-21, before a national TV audience on Monday Night Football at Lincoln Financial Field.

It marked the first loss for the Eagles, who dropped to 8-1 and turned the ball four times—one more than they had in their previous eight games.

When asked if it was more a case of the Eagles losing the game than Washington winning, Sirianni stopped that with, “I don’t like to ever say we lost it, they played well, but we know we made mistakes, right, we made uncharacteristic mistakes.

“I give them all of the credit. But we didn’t play our type of game. We made mistakes, we had penalties, we had uncharacteristic fumbles, and we threw an interception.

“I didn’t do a good enough job coaching this week. We made a ton of mistakes and that loses you football games in this league. Whether the calls were bad, or the calls were good, when you play the way we did in all three phases, offense, defense, special teams, coaching, when you play like that, it seems like everything is going against you.”

The Eagles never recovered from a horrible first half.

The Eagles scored on two of their three possessions, that is for the time they had the ball. The Commanders ran 51 plays, more plays than any NFL team ran in the first half this season.

Washington outgained the Eagles, 236-101, in total yards. Washington dominated the time of possession by a lopsided 23:49 to 6:11, the most lopsided time of possession against an Eagles’ team since Week Six of the 2001 season, when the Eagles beat the New York Giants in a brutal 10-9 victory, ironically, on Monday Night Football.

Washington scored on four of five drives in the first half, on a total of 49 plays, each drive averaging 12.25 plays a series. One drive lasted 16 plays, at the time the total amount of plays the Eagles ran the entire game. The Commanders scored on 13-, 12- 16- and 8-play drives.

Some key moments came when Quez Watkins fumbled at the Washington 27 with 5:43 left. It was the third turnover for the Eagles, which matched their season total.

Another critical play occurred with 1:38 left to play when veteran defensive tackle Brandon Graham was called on a late hit for shoving down Taylor Heinicke on a third-and-seven at the 50.

Heinicke had taken a knee when Graham’s momentum carried him into Heinicke. Graham was flagged for a personal foul, which essentially gave the Commanders the game.

“Credit to Washington, I wish I could have had that call back, and for me, I want to make up for that next week,” Graham said afterward. “I let the team down in a situation like that. We can’t put the game in the ref’s hands. In that position, I have to know. If he goes down, it’s okay. I was just hustling to make the play and making sure he was down.

“I was trying to touch him down. That’s on me. I have to own that one. We want to learn from it and we want to make sure we remember this feeling. We’re only going to lose if we beat ourselves. Washington came out ready to play. Credit to them. I know we’re going to bounce back.”

Jalen Hurts was rendered ineffective throughout much of the game, completing 17 of 26 for 175 yards and an interception, while Heinicke connected on 17 of 29 for 211 yards and running back Brian Robinson Jr. pounded the Eagles for 86 yards and a touchdown.

Washington ran 81 plays to the Eagles’ 47. The Eagles were manhandled and pushed around, especially their defensive front, which was chopped up for 152 yards on 49 carries and two touchdowns on the ground.

What’s happened now is a template has been created on how to beat the 2022 Eagles. It’s just a matter of how, or if, the next eight teams the Eagles play follow it, or are capable of following it.