The relationship that led the Eagles to Ian Book 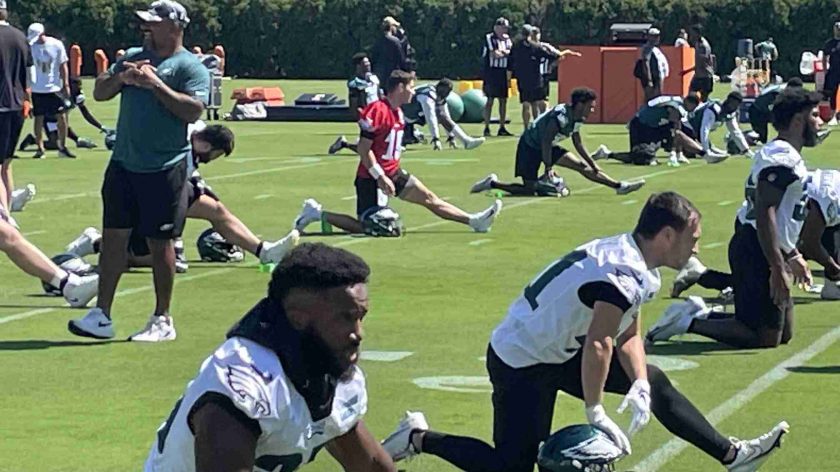 PHILADELPHIA – The Eagles watched Reid Sinnett and Carson Strong all summer and felt the need for more.

Although Sinnett was ultimately brought back to the practice squad after being waived, Howie Roseman wanted a little bit more at the QB3 spot on the 53-man roster and tried to claim 2021 third-round pick Kellen Mond before door No. 2 landed Philadelphia another high-profile signal caller from that draft, former Notre Dame star Ian Book.

The hope, of course, is that none of these names play with Jalen Hurts firmly entrenched as a backup and Gardner Minshew serving as a top-level backup. That said, QB3s have never meant more in the COVID-19 era and while pandemic restrictions are a thing of the past, the virus still lingers which means a positive test could still cost a signal caller a game.

Coach Nick Sirianni recently noted in Miami that he would feel comfortable with only two QBs on the 53-man roster but Howie Roseman has to take more of a 10,000-foot view of all the contingencies, whether it’s a stubborn respiratory virus or the realization that an heir apparent for Minshew is needed because the QB2 will be a free agent after the season and looking for an opportunity to be a starter somewhere.

The conveyer belt at the QB factory needs to keep churning with Book and Sinnett now dueling for the mythical developmental championship.

The Eagles know the book on Book better than most because Sirianni is tight with Fighting Irish offensive coordinator Tommy Rees, who was a fledgling assistant on the same staff as Sirianni with the then-San Diego Chargers.

“I really trust Tommy’s opinion, and obviously we trust our own eyes, we trust our own scouts, but a lot of work went into that,” Sirianni said. “One thing Tommy always said about him, and now this is a guy that won a ton of football games for him and his program at Notre Dame, is how good of a leader he is.

That sentiment came after the Eagles built their own foundation when it came to Book.

“We did a lot of work on him in the pre-draft process, obviously,” said Sirianni. “Naturally when you don’t get a guy sometimes that you might want, there’s a little bit of, like, ‘Oh, man, I kind of wanted him; oh, shoot, they took him,’ or whatever it is.

“But you do the work in preparation of a day when you have an opportunity to potentially get him. We did a lot of work on him. We liked him in the pre-draft process.”

And remember Book was thrown into the fire for one game as a rookie last season due to injuries and COVID so who’s to say the Eagles won’t need him somewhere along the line?