The Eagles survive the Colts, 17-16, on the legs of Jalen Hurts 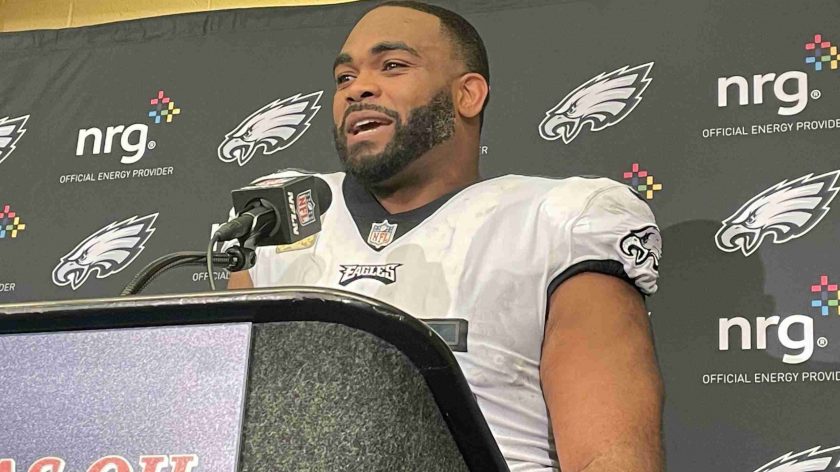 Brandon Graham was allowed to hit the quarterback this time. Nick Sirianni allowed Jalen Hurts to put the Eagles on his back, and then Sirianni allowed himself to celebrate with what seemed like every Eagles’ fan at Lucas Oil Stadium on his return to Indianapolis with a squeaky 17-16 Eagles’ victory over the Colts on Sunday.

The Eagles moved to 9-1 thanks to Hurts grabbing the game by the throat in the fourth quarter with a seven-yard run for the game-winning touchdown and a touchdown pass, set up by Hurts’ long run.

The victory snapped an Eagles’ 41-game losing streak when trailing by 10 points or more in the fourth quarter traveling back to the resounding DeSean Jackson 65-yard walk-off punt return in the Eagles’ 38-31 victory over the New York Giants on Sunday Dec. 19, 2010.

“That was a great win,” said Sirianni, who returned to Indianapolis for the first time after serving as the Colts’ offensive coordinator under Frank Reich (who Indianapolis fired two weeks ago). “It wasn’t what you draw up, or anything like that. In this league, it rarely is. It’s tough sledding. It was a great win. I’m emotional because I love Frank Reich, I really do. He’s one of the best damned football coaches I’ve ever been around. You don’t want to know what I think if he should be here or not.

“You guys can imagine what I really think. I love him and I got a little emotional about that. I got to see the guys that I really wanted to see. I spent a lot of time here and it was sweet to come here, especially with what happened with this organization (firing Reich) these last couple of weeks, and get the win … the win.

“Leaving Indianapolis. With. A. Win.”

A win that came under a series of Eagles’ blunders. They fumbled twice (giving them six turnovers in the last two games) and were flagged seven times for 55 yards.

There was one sequence in the first quarter when the Eagles were penalized on three-successive plays, when uncharacteristically, center Jason Kelce was called for an ineligible player downfield, followed by left guard Landon Dickerson’s holding call.

To complete the hat trick, tight end Tyree Jackson was called for offensive pass interference, then wound up back on the bench.

Hurts didn’t finish with eye-bulging numbers, completing 18 of 25 for 190 yards and a touchdown. But when plays needed to be made, it was Hurts who delivered.

He converted a fourth-and-two to preserve the game-winning drive at the Colts’ 9 in the final two minutes, and his seven-yard score came on a quarterback draw, after the Colts had done a decent job in containing Hurts.

“I think you keep seeing it, when you need a drive, when you need some points, you can always lean on our offensive line,” Sirianni said. “Then Jalen is special with the ball in his hands. Man, that thing opened up and I was looking at the play, and he executed and it was pretty sweet.”

After a rough start defensively, the Eagles’ defense shut down Colts’ tailback Jonathan Taylor, who finished with 84 yards on 22 carries. By halftime, though, he had 64 yards rushing on 11 carries, averaging 5.8 yards a carry. In the second half, the clamps came down on Taylor, who had 20 yards on 11 carries, averaging 1.8 yards a carry, the last two quarters. After the Colts’ first series, Taylor was held to 35 yards on 15 carries, after blistering the Eagles for 49 yards on his first seven carries.

They didn’t start well. On the opening drive of the game, the Colts ran right at them. Suh’s aggressiveness put him out of position, and Joseph simply couldn’t get off the ball. They both, however, recovered nicely to contribute to the Eagles’ victory in the end.

It seemed fitting that Graham closed the game with a seven-yard sack of Matt Ryan with 39 seconds left to play on a third-and-nine at the Colts’ 33. It forced Indianapolis to panic staring down at a fourth-and-16 at the Indianapolis 33, extended further by a Colts’ offsides penalty.

It was particularly gratifying for Graham, whose roughing call against Washington on Monday night allowed the Commanders to run out the clock.

“There was a lot of stuff (against the Colts) where we just persevered and we said if we have a chance, we were going to go out and finish the game, and that’s what we did,” he said. “We knew what it meant to (Sirianni coming back to Indianapolis). He talked about it a little bit. He didn’t really harp on it. He didn’t make it a big thing. But I knew.

“If it’s me, and he’s emotional, too, you see how he is on the sidelines, you know this meant a lot to him. He wanted to get this ‘W.’ I’m happy we were able to persevere and get it for him. I think we are (back on track). We have some cleaning up to do. Getting back in the win column is all you want, because this could have easily been an ‘L.’”