The Eagles stomp out the Giants, 48-22, in clinching a playoff berth for the second-straight season 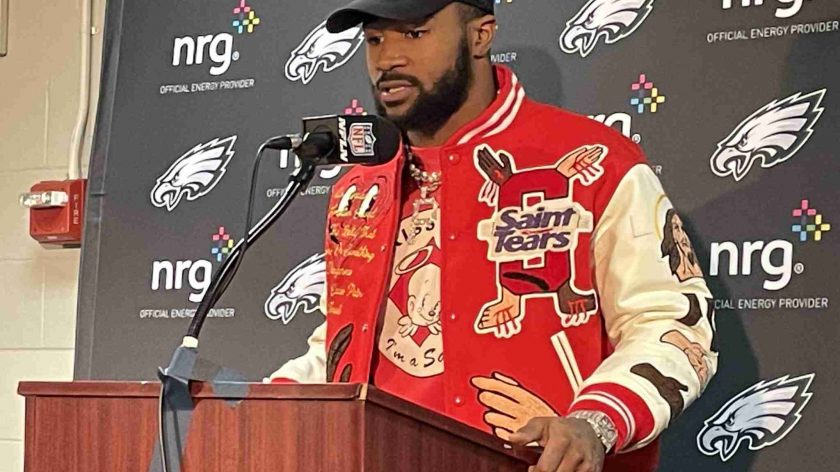 Jalen Hurts folded his arms in a matter-of-fact way, implying this was rather easy after Miles Sanders’ three-yard touchdown run in the first quarter.

It looked easy because it was.

As was the Eagles’ absolute domination of the New York Giants, 48-22, in clinching a playoff berth for the second-straight year under head coach Nick Sirianni on a soggy, grey Sunday at MetLife Stadium.

The Eagles, who moved to 12-1 for the second time in franchise history (2004 being the other season), scored on their first three possessions and never looked back.

MVP candidate Hurts completed 21 of 31 for 217 yards and two touchdowns, while rushing for 77 yards and another score.

Aside from a blocked punt late in the first half with the Eagles up 21-0, it was a near-flawless game. Anything the Eagles wanted to do offensively they did in remaining the only undefeated team in the NFL on the road this season. In scoring 35-plus points over their last three games, the Eagles’ 123 combined-point total is their most over a three-game span since 1950.

“I think when you’re able to come out and execute at a high level early, have a long drive the first drive, and have some conversions on third down, that’s big,” Hurts said. “The importance of execution when you’re getting these different looks, the coach (Giants’ defensive coordinator Don “Wink” Martindale) has to the pedigree, he’s known for doing exotic things and you have to be able to execute against those exotic looks.”

Hurts, as usual, kept it cool afterward about going overboard.

While everyone was looking to throw more accolades upon an Eagles’ season that’s yet to be determined, his choice words summed up where the Eagles are.

“I don’t want to get into anything more than what it is, I think that the most simple thing we’ve been trying to do is trying to grow,” he said. “Trying to go out here and execute. It’s good that we prepare in a way where we’ve been able to go out here and execute at a high level. We just want to continue to do that. That’s the name of the game. Never get too high, never get too low, just stay true to what’s important and keep the main thing the main thing.

The offensive line has been the backbone of this team, and that surfaced again on Sunday against the overmatched Giants (7-5-1).

On Hurts’ third-quarter 10-yard touchdown run that locked up the game, center Jason Kelce pulled right and caught Giants’ linebacker Tae Crowder up field, left guard Landon Dickerson shoved back Giants’ nose tackle Dexter Lawrence and left tackle Jordan Mailata pulled right expected to sweep away any of the debris that was left. By the time Mailata reached his point, Hurts was already rolled through the hole on his way to the end zone.

It was the type of execution Hurts alluded to and it’s the kind of hard-ground, winter football that the Eagles will need moving forward if they want to continue in the direction that they seem to be heading.

“We need to stay true to that. Everything else will handle itself. I carry my scars with me everywhere I go. I don’t forget. I truly invest my focus on getting better as a player, getting better as a quarterback, and doing the things I need to do for my team.”