The Eagles slide by Jacksonville and Doug Pederson, 29-21, to remain undefeated 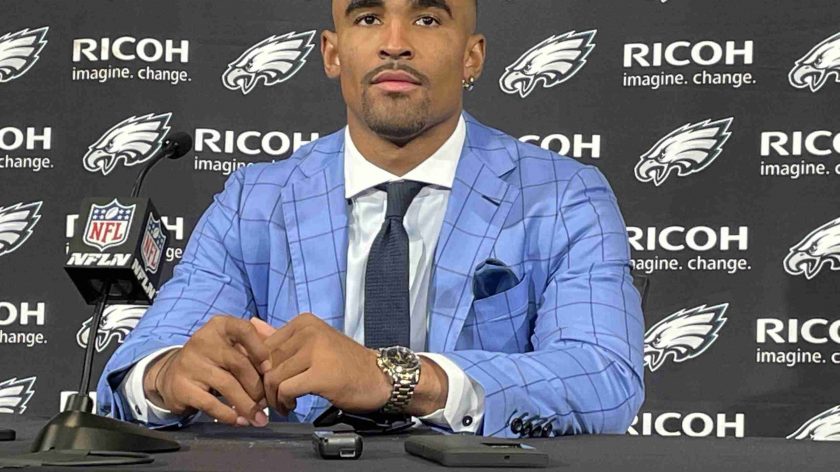 With wet grass matted to the front of his helmet, through squinting eyes from the diagonal falling rain, Jalen Hurts and the Eagles were able to navigate through their first adversity this season against their former head coach and a rising team on an overcast Sunday at Lincoln Financial Field.

The Eagles’ 29-21 victory over the Jacksonville Jaguars and visiting Doug Pederson was as ugly as the front of Hurts’ helmet.

But the only remaining undefeated team in the NFL stayed that way by finding different ways to win.

It marks the first time the Eagles started a season 4-0 since 2004 when they won the NFC.

Though Hurts was a rather pedestrian 16 of 25 completed passes for 204 yards, with his third pass of the game deflected and returned for a pick-six, the Eagles won thanks to a defense that forced five turnovers and Miles Sanders rushing for a career-best 134 yards and two touchdowns on 27 carries. Linebacker Haason Reddick had two strip sacks, the second clinched the victory in the last two minutes.

The conditions were nasty.

The Eagles ran the ball a season-high 50 times for 210 yards, averaging an impressive 4.2 yards a carry.

“Whatever the conditions are, we practice in this type of stuff and we do everything we can to be prepared for this type of stuff,” Sanders said. “Obviously, we’re still going to pass the ball like we did today, but we’re going to lean on the offensive line, 200 yards rushing—that’s a day. They have a great team over there and a good front, but honestly, I’d take our o-line against anybody.

“My job is to be ready whenever they call my number like that. With the weather being the way it was, we relied on the offensive line. The offensive line had a heck of a game. We attacked the defense, instead of running our outside zone. We tried to be more downhill first, then mixing it with mid-zone and inside zone stuff.”

The Eagles faced their first adversity this season, down early 14-0, before scoring 20 unanswered and taking control of the game by the second quarter.

The other two failed fourth-down attempts fortunately wound up being two of Jacksonville’s five turnovers.

Trailing 14-0, Sirianni opted to go for it on fourth-and-three at the Jacksonville 40 on the Eagles’ last play of the first quarter. The Eagles lucked out when Lawrence fumbled the ball away on the Jags’ next drive at the Philadelphia 34. The Eagles converted that into their first score, which coincidentally came on fourth-and-goal from the Jags’ three when Hurts scored on a quarterback draw.

The other time Sirianni’s gamble failed came on a somewhat dubious decision with 1:54 to play. Ahead 29-21, Sirianni could have put the game out of reach with a field goal on fourth-and-three at the Jacksonville 21.

Instead, he decided to go for it, ending in a Hurts’ incomplete pass to A.J. Brown. Again, the game’s other star, Reddick, had his second strip sack and Javon Hargrave pounced on the loose ball at the Jags’ 13.

The Eagles ran out the remaining time.

“We just had to do what we felt was best in that particular moment with the weather and everything,” explained Sirianni as to why he went for it on fourth down rather than kick the field goal late in the game. “I don’t want to get into anything else really there. We just felt that was our best option in that particular case.”

The weather may have “affected them a little bit, obviously we can’t turn the ball over five times like we did and expect good things to happen,” Pederson said. “We’re going to be in games like this when the conditions aren’t going to be favorable. We just have to do our part to hang on to the ball.

“We talk about it all of the time. We have to focus on us. Anytime you make the mistakes we did, turn the ball over like we did, and where we turned the ball over, you’re not going to keep good teams out of the end zone. That’s really the difference in the football game.

“It was the turnovers and mental errors that really cost us today.”

Pederson complimented the crowd and reception he received from Eagles’ fans. He said once the game started, the nostalgia wore off.  It was game time.

The Eagles lead the NFL in turnover differential plus-8 this season. They snapped their five-quarter second-half scoreless streak by scoring for the first time in the fourth quarter this season. The nine points happened to be the winning difference (7 pts-first quarter, 85-second quarter/the most points scored in the second qtr. in the NFL history through first four games, 14 third quarter, 9-fourth quarter).

Down 14-0, Sirianni said that he and his team had talked about adversity. But had they faced it yet?

Not until Sunday against Jacksonville.

“It was a great opportunity to say we talked about this, the reason you players are here is because you’re built to handle adversity,” Sirianni said. “Not every game is going to be pretty. It’s going to be muddy sometimes. It was muddy right there and our guys buckled down.