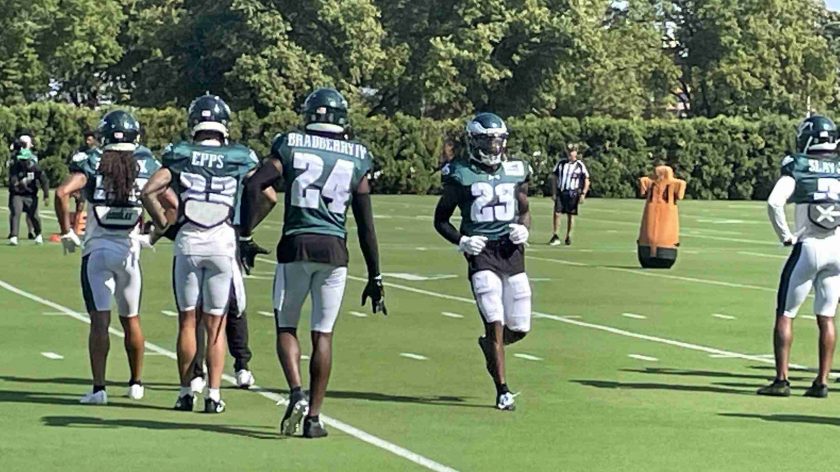 The acquisition of safety C.J. Gardner-Johnson last week from the New Orleans Saints was huge news for the Eagles. It strengthened what had been perceived as a soft spot on the Eagles at safety, giving them a young, dynamic, talkative cover hybrid who often came down from the safety position to cover the slot receiver for the Saints last year. He’ll fill a role much as Malcolm Jenkins did for the Eagles.

Gardner-Johnson came at a bargain, too, with Howie Roseman getting the versatile DB, along with a 2025 seventh-round pick, ix exchange for a 2023 fifth-round pick, and 2024 sixth-round selection.

Now, it’s up to Eagles’ defensive coordinator Jonathan Gannon to get Gardner-Johnson caught up to the Eagles’ scheme. That could come as a dicey learning-as-he-goes situation with the NFL season opener days away.

When asked on Tuesday how much the addition of Gardner-Johnson changes the defense, Gannon replied, “Not much. It was good to add him to the unit, to that entire room, and really like his skill set and the player that he is. Looking forward to seeing him mesh with our defense and hopefully make some plays for us.”

Getting used to the play calls and how the Eagles’ secondary rotates takes time.

Will Gardner-Johnson be ready, and can he be a full-time safety?

“Everybody is a little bit different with that,” Gannon said. “D.K. [Assistant Defensive Backs Coach D.K. McDonald] and D-Will [Defensive Passing Game Coordinator/Defensive Backs Dennard Wilson] are obviously spending a little more time with him to try to get him caught up.

“But he’s very smart. He’s intelligent. His skill set fits to what we want to do, and when he’s ready to play, he’ll play.

“Just looking at his tape, the skill set that he brings, he basically played a lot in the slot, but he has played safety before.

“We’ve talked about a modern-day safety is doing it all, coverage ability, being able to play in the box, having range, playing post closed, post open, covering, tackling, communicating, being smart. I feel like he’s going to integrate well into the defense.”

Gannon stressed that it would come down to how quickly Gardner-Johnson gets acclimated to the “verbiage.” He feels Gardner-Johnson’s accumulated football acumen will take care of the rest.

As for the secondary, only Darius Slay is the lone returning starter from last season. Safeties Gardner-Johnson and Marcus Epps are a new tandem, while corner James Bradberry is a new addition, and slot corner Avonte Maddox started five games in 2021. There is a lot of coordination that goes into forming a solid secondary. That comes with reps together. This secondary will be playing together for the first time in the Eagles’ season opener at Detroit.

Can it shape up in time the way Gannon envisions it?

“That typically takes some time, but the NFL there’s not a lot of time,” Gannon admitted. “I feel good about where that room is. When you add new pieces, but they can think and process and they’re smart, once they understand the why, then they just need some time on task to playing with each other. But going through camp, OTAs and camp, I like where that room is at. And then the addition of Chauncey [S C.J. Gardner-Johnson], they’re getting him caught up to speed, as well, and I think it’ll be pretty seamless.”

Gannon’s proof will come in Detroit on Sunday.