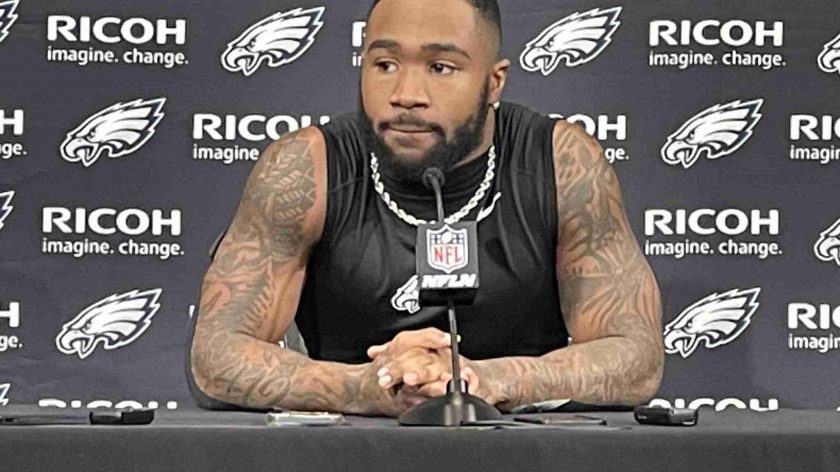 The portends are all there. The Eagles are finding different ways to win, and even when a score says one thing, the actual eye test says something completely different.

History will show the Eagles beat the Green Bay Packers, 40-33, on Sunday night, Nov. 27, 2022, though you’ll have to peel deeper to find just how dominant the Eagles were in moving to 10-1 for the fifth time in franchise history.

The final chapter of the 2022 season is still unwritten.

What the Eagles’ latest victory shows is that even when an opposing team knows what they’re going to do, they’re still able to execute their will on them.

The 363 yards rushing was the second most in franchise history, coming only behind the 1948 NFL champion Eagles, who rushed for a single-game franchise record 376 yards in a 42-21 win over Washington on Nov. 21, 1948.

Hurts’ 157 came on 17 carries, many coming in third down. He bolted through the Packers for over 100 yards in the first quarter, becoming the only quarterback in the NFL to rush for 100 yards or more in a quarter in 30 years.

“The bottom line is, good teams in this league find a way to get it done each and every week. Whatever is there and however you got it done, you make sure you get it done.”

The Eagles ran out fast to a 13-0 lead, and the Packers scratched back for a 14-13 lead, before the Eagles scrambled back to take a 27-20 lead going into halftime, a lead the Eagles wouldn’t relinquish.

“This shows we can do this day in and day out, and all credit goes to the offensive, they love running the ball and that makes me more confident,” said Miles Sanders, who scored two touchdowns and rushed for 143 yards on 21 carries, averaging 6.8 yards a carry. “Those guys up front are something special. That’s what we feed off of. When the run game is working, we’re not shying away from the run game. We’ve been dominant every time we stick to the run game.”

Hurts was a big key. He took off on cloudy situations, the first quarter setting the tone.

The Eagles rushed for 155 yards in the first quarter, 103 came from Hurts.

It did get a little scary, though.

On his last carry of the quarter, Hurts got plowed by Packers’ linebacker Kingsley Enagbare in the ribs. Hurts’ mouthpiece went flying, and he walked gingerly back to the Eagles’ sideline as time wound down in the first quarter.

If there was one flaw, it came with head coach Nick Sirianni’s decision to go for it on fourth-and-inches at the Eagles’ 37 with 4:50 left in the first quarter. The Eagles failed, giving the Packers a chance to go ahead, which they did.

“What I was disappointed with came in the first half, when the offense and special teams put the defense in short situations, one was my fault (going for it on fourth down),” admitted Sirianni said. “All of their possessions in the first half, they didn’t have to go the long way. With Aaron Rodgers, you want to give him any short fields, and we gave him three and they made us pay for it.”

The Eagles’ six remaining opponents have a combined record of 29-22. They have a huge test in a very physical Tennessee team led by Derrick Henry coming in next, the New York Giants twice and the peaking Dallas Cowboys.

The Eagles will make the playoffs. They’re the best team in the NFC and arguable the NFL. The beauty of their situation is they’re able to win in various ways, especially when it means imposing their will.

“You feel that,” Sirianni said. “You definitely that in a game with the players coming off the field. This is an unbelievable offensive line.”