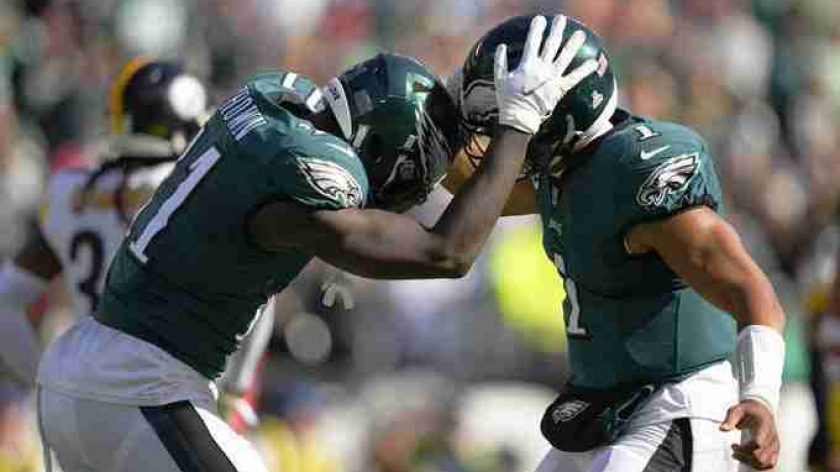 The smoke that bursts into the air for the Eagles’ player introductions still lingered making it a little hazy to see on a clear, sun-drenched Sunday at Lincoln Financial Field.

It didn’t take long for the cloud to dissipate so everyone could see quite possibly the best team in the NFL right now.

The Eagles’ 35-13 thrashing of the Pittsburgh Steelers and rookie quarterback Kenny Pickett wasn’t so much an easy win over a rebuilding team as it was a show of force.

The Eagles remain the only undefeated team in the NFL at 7-0. It’s the first time the Eagles have been 7-0 since 2004, when they won the NFC championship before losing to the New England Patriots, 24-21, in Super Bowl XXXIX.

“I thought we had a good first and second half today, that’s a good football team,” Eagles’ coach Nick Sirianni said. “I know that it’s an extremely well-coached football team. I can’t say enough good things about coach (Mike) Tomlin, his resume speaks for itself.

“I thought we did a good job of that today.”

The 7-0 start marks the second time in franchise history the Eagles started a season winning their first seven games since 2004, when the Eagles’ seven-game winning streak, ironically, was snapped by the Steelers, in Pittsburgh.

Brown’s third touchdown reception came while Steelers’ cornerback Ahkello Witherspoon was yanking down on Brown’s left arm—and he still made the catch.

When asked what the Eagles need to do to avoid a letdown, Brown said, “just remaining humble,” he said. “We weren’t perfect out there. The score may say something, but we weren’t perfect. We know we have stuff to clean up. Like I said a couple of weeks ago, this team is hungry and most importantly humble.

Hurts threw a career-best four touchdowns and 285 yards, completing 19 of 28.

Hurts also established a franchise record with the longest regular-season winning streak by an Eagles’ quarterback with 10-straight wins, dating back to the 2021 season. Hurts’ run eclipses the previous mark of nine that he shared with Hall of Famer Norm Van Brocklin (1960), Donovan McNabb (2003), and his predecessor, Carson Wentz (2017).

In seven games, the Eagles have turned the ball over twice, while causing an NFL-high 16 turnovers (10 interceptions, six fumble recoveries) for plus-14 in turnover ratio, after Avonte Maddox’s fourth-quarter fumble recovery and C.J. Gardner-Johnson’s fourth interception.

The Eagles were up, 21-10, going into intermission. The game was over by halftime, even though Tomlin couldn’t see it.

At halftime, CBS’ sideline reporter Tracy Wolfson asked Tomlin about defensive halftime adjustments on Brown and he replied, “There’s really no adjustments, there’s no schematic adjustments, (Brown) is making plays. We’re not and that’s unfortunate. The game is much closer than it is because of that, so we have to keep a lid on it. You have to give him credit, he’s making some combat catches. We can’t allow that to happen.”

James Pierre came out on Brown in the second half, but it didn’t matter.

The Eagles scored on their first possession of the second half, this time forcing the Steelers to pull their safeties down to stop Miles Sanders, who ran for 31 yards on his first two carries of the half. On a first-and-10 at the Pittsburgh 34, Hurts hit a wide-open Zach Pascal for a touchdown and a 28-10 Eagles lead.

During the week, Sirianni had expressed some concerns about coming off the bye week and how the Eagles would react to being the only undefeated team in the NFL.

“We have great leaders,” Sirianni said. “The best teams that have been around practice hard. They’ve picked up the process of what we’ve done each and every week. They picked it up and they got their rest, they came back ready to go. That doesn’t happen unless you have great people on your team and great leadership on your team.”