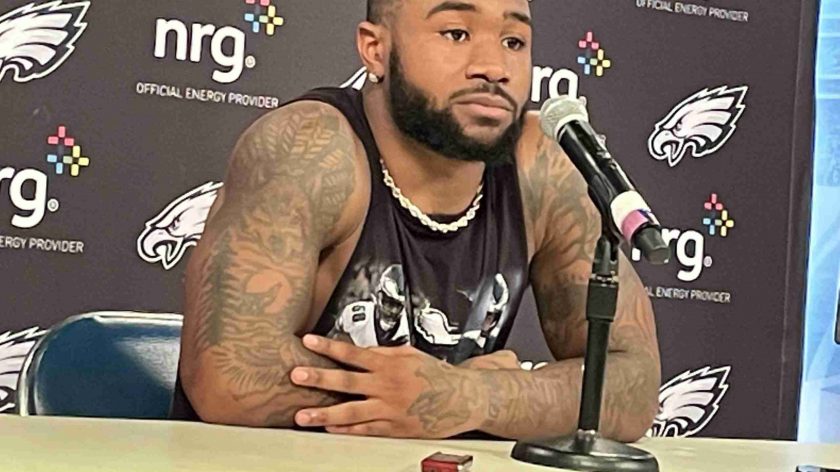 It seemed like a business trip that the Eagles did not want to take. There was an eye-rolling, ho-hum quality to their effort on Thursday night against the woeful Houston Texans at NRG Stadium.

The Eagles remain the only undefeated team in the NFL after a 29-17 victory over Houston, moving to 8-0 for the first time in franchise history.

If not for a diving C.J. Gardner-Johnson third-quarter interception that turned the game around, who knows what the outcome might have been?

If anything, it proved the Eagles can submit a C-level performance and still win—against a one-win team.

Jalen Hurts completed 21 of 27 for 243 yards and two touchdowns, and tight end Dallas Goedert hauled in a game-high eight passes for 100 yards and a touchdown. Defensively, tackle Javon Hargrave played his best game as an Eagle, with a team-leading seven tackles and three sacks.

But overall, there was a general malaise with which the Eagles played. It certainly was not up to the standard the team had played with in victories over Pittsburgh and Dallas in their previous two games.

“These Thursday night games are always tough, so however you gotta go and get it done, you got go out and get it done, and our guys played hard, they played physical,” Eagles’ coach Nick Sirianni said. “A couple of things we talked about was making sure our bodies were as good as they could possibly be to go out and handle our business, and being able to play fast.

“Those were our two main goals.”

Houston tailback Dameon Pierce blasted the Eagles for 139 yards rushing on 27 carries. It marked the second time this season the Eagles permitted a running back to rush for over 100 yards, and the first since former St. Joe’s Prep star and Detroit Lions’ tailback D’Andre Swift beat the Eagles for 144 yards in the season opener.

As for being 8-0, Sirianni took the franchise milestone in stride.

The teams went into halftime tied, 14-14, in as balanced a game on the scoreboard as on the field. It was the first time this season that the Eagles went into halftime without the lead. The Texans averaged 7.3 yards a play in the first half to the Eagles’ 7.1. Houston gashed the Eagles on the ground, averaging 6.5 yards a carry, with 88 coming on 13 carries from Pierce.

Everything changed with 8:23 left in the third quarter. On a third-and-six at the Houston 24, Texans’ quarterback Davis Mills made an ill-advised throw and safety Gardner-Johnson swooped in and grabbed it. It was his NFL-high and career-best fifth interception (the Eagles are the first team in NFL history with a positive turnover differential through the first eight games since the 1972 Pittsburgh Steelers).

From there, Hurts got the Eagles’ offense rolling.

Ten seconds after the Gardner-Johnson pick, the Eagles led for good after Hurts hit A.J. Brown with a 17-yard touchdown pass. Houston was only able to manage a field goal the remainder of the game, while the Eagles added the Goedert touchdown and Hurts’ two-point conversion for a 29-17 advantage with 11:22 left to play.

It wasn’t perfect for the only perfect team in the NFL. But passable in Houston was good enough for the first 8-0 start in the Eagles’ history.