Taking a closer look at the Eagles’ loss to Washington 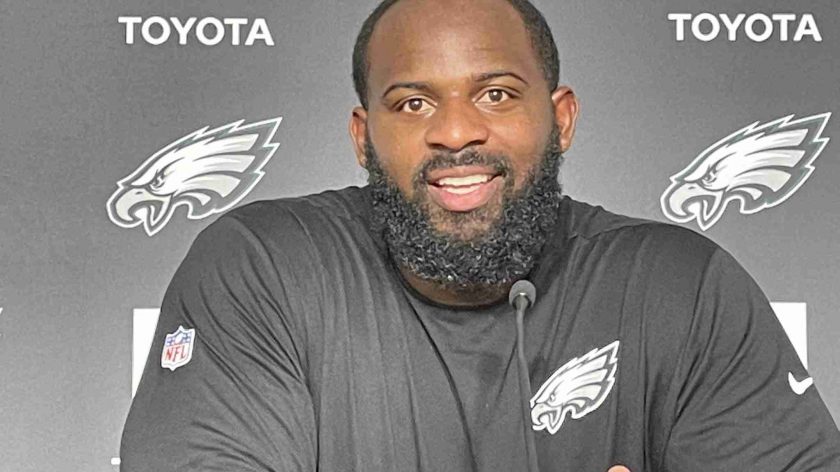 I didn’t have Washington in my Eagles’-first-loss pool. While I suspected it would be a team that would be able to take advantage of their run-defense shortcomings as the Commanders did, my money was on a more explosive ground game such as Tennessee’s with Derrick Henry or the Giants with Saquon Barkley.

Even after racking up 152 yards against the Eagles, Washington still is only 20th in the league in rushing (112.4 yards per game) and 29th in rush average (3.9 per carry).

But that didn’t matter. The Commanders were able to continually gain enough yards with their ground game on first and second down to put themselves in one third-and-manageable situation after another. Washington averaged 3.2 yards per carry on first down and 3.4 on second down.

Fourteen of their 22 first-down runs and 11 of their 17 second-down runs gained three or more yards. The Commanders averaged 4.6 yards to go on third down. That was the best against the Eagles this season.

Washington came into the game with the league’s seventh-worst third-down offense. They had converted just 34.2% of their third downs in a 4-5 start.

Those third-and-manageables made Commanders wide receiver Terry McLaurin even more difficult to defend than usual. He had eight catches for 128 yards against the Eagles.

Six of those catches and 86 of his receiving yards came on third down. Five of his six receptions produced first downs. The sixth, a nine-yard catch on a third-and-10, set up another first down on a two-yard run by Curtis Samuel on fourth-and-one.

Washington did what every underdog wants to do against an explosive offense like the Eagles. It kept the ball away from them. They controlled the football for nearly 40 ½ minutes, which was the highest time of possession by an Eagles opponent in seven years, going back to the Chip Kelly era when Chip’s hurry-up offense regularly forced his defense to spend an eternity out on the field.

The Commanders ran 81 plays, 51 in the first half. Four of their six scoring drives ate up 55 plays and more than 29 minutes.

Their 49 rushing attempts were the most by an Eagles opponent since 2004 when the Pittsburgh Steelers ran the ball 56 times against them in a 27-3 win. Ironically, that loss also knocked the Eagles from the unbeaten ranks. They had started 7-0 that year. They finished 13-3 and made it to the Super Bowl.

The Eagles’ struggles against the run aren’t limited to Monday night and aren’t even limited to the two games they’ve been without Jordan Davis. They’ve given up 722 rushing yards in their last five games. They’re 20th in rushing yards allowed per game (124.8) and 22nd in opponent rush average (4.7).

That’s why Howie Roseman has brought in veteran reinforcements.

Throwing to the backs

Dallas Goedert is out for at least four games, maybe more, and that’s a huge blow to the Eagles’ offense. He is one of the league’s best blocking tight ends and was on pace for the first 1,000-yard receiving season of his career before he injured his shoulder against Washington last week.

Backup tight ends Jack Stoll and rookie Grant Calcaterra can’t replace Goedert’s blocking. They’ll try to pick up some of the pass-catching slack left by his absence, but that’s a big ask as well.

Jalen Hurts likely will lean on his wide receivers even more than he already does, but there is another obvious option available to head coach Nick Sirianni and offensive coordinator Shane Steichen.

Miles Sanders and Kenny Gainwell both are excellent pass-catching backs who have been largely ignored in the passing game this season, mainly because some combination of Goedert and wide receivers A.J. Brown, DeVonta Smith, and Quez Watkins usually have been open.

Steichen certainly isn’t philosophically opposed to throwing to the running backs. Hell, he coached Austin Ekeler when he was in charge of the Chargers’ offense, including 2019 when Ekeler led all NFL running backs with 92 catches.

As a rookie in 2019, Sanders had 50 catches on 63 targets. He averaged an impressive 8.1 yards per target. His five receptions of 30-plus yards that year were the second most in the league by a running back behind only Ekeler’s six.

Gainwell’s receiving skills were a big part of what attracted the Eagles to him last year when they took him in the fifth round of the 2021 draft. He opted out of playing at Memphis in 2020 because of COVID. But the year before, when he was used both as a running back and slot receiver by Tigers coach Mike Norvell, he had 50 catches and averaged 12.0 yards per catch.

As a rookie last year, Gainwell was targeted 50 times and had 33 catches, averaging 7.7 per catch.

–Jalen Hurts has completed 11 deep balls (throws of 20 yards or more). That number is in the middle of the NFL quarterback pack through the first 10 weeks of the season. Six of those completions have been to A.J. Brown, three to DeVonta Smith, and two to Quez Watkins. Five of Brown’s six touchdown catches have been on deep balls. Brown also has a team-high 11 catches on throws between 11 and 19 yards.

–Monday night’s loss to Washington was the first game this season in which the Eagles failed to score any points in the second quarter. They had the ball for less than two minutes of that quarter.

–The Eagles are third in fourth-down efficiency (75.0%). They’ve converted 12 of 16 fourth-down attempts.

–Sixteen of the Eagles’ 29 sacks have come on third or fourth down. Fourteen have been in the fourth quarter. Four-and-a-half of Haasan Reddick’s 6 ½ sacks have been on third/fourth down.