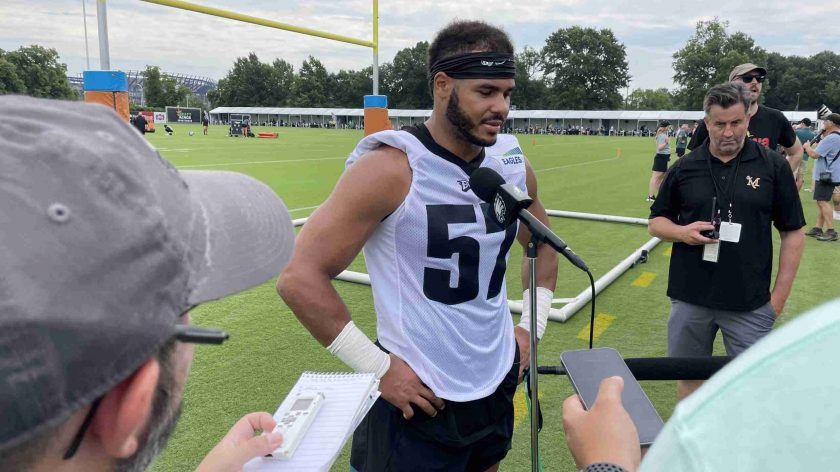 PHILADELPHIA – The defensive green dot is probably a little overrated, something Eagles fans should have learned back in 2017 when Jordan Hicks went down with an Achilles injury.

Hicks was the on-field defensive leader at the time for Philadelphia and that role shifted to Nigel Bradham which was framed as a big deal, at least until then-defensive coordinator Jim Schwartz threw cold water on the sentiment.

“I mean, you hear something and you say it again,” the no-nonsense DC said at the time. “You could put a tape recorder out there and do it.”

Schwartz was more concerned over losing a good player and Bradham taking over as a leader, something in hindsight the Eagles were able to overcome en route to Super Bowl LII.

“In some things, [Bradham] needs to be able to make calls and some things he doesn’t,” said Schwartz. “He’s done a good job with it. And his leadership is starting to show. He’s spreading his wings that way a little bit. He plays with a lot of energy on the field. But being in front of the huddle and being the communicator, I think you start to see that a little bit more from him.”

Fast forward to 2022 and people were still wondering about the green dot even though the answer was obvious. T.J. Edwards had it last season after ascending to the MIKE linebacker position and has it again as things get ready to kick off on Sept. 11 in Detroit.

“I mean I wore it a little bit last year, you know back half of the year but yeah I’ve had it for camp obviously,” Edwards said. “I’m really excited about it. You know, I think I did it all throughout college [at Wisconsin] and so I’m comfortable doing so.”

Relaying the actual defensive call is the easiest part of the job, what Schwartz described as the tape recorder aspect of the description.

The more important aspect is communication and making sure everyone on the defensive front is aligned correctly for what has been called.

Off the field, it’s Jonathan Gannon’s defense. On it, it’s Edwards’ unit.

“How I look at it is everyone has to own their role and it’s something we talked about with coaches. It’s just what we’re doing, how we each got fits and things like that,” said Edwards. “So I think as a unit we all take ownership over what we’re doing and communicating. But I think it’s just one of those things that’s exciting.”

Many fans are always looking to replace Edwards because of his draft pedigree and most assume he can’t be a three-down linebacker because of perceived coverage issues.

Edwards, though, has won over the coaching staff, according to an NFC personnel executive.

“Their coaches love him and he played very well when they pulled the trigger on him last season,” the exec said. “He was their best LB and I don’t think that’s changed even with the improvements they’ve made.”

Edwards was a great college player with the Badgers but wasn’t a high-level prospect due to his poor stopwatch speed leading up to the 2019 draft.

The chip on his shoulder from coming in ninth on the depth chart and slowly working his way up remains.

“I’d be lying if I said it wasn’t something that stuck with me,” Edwards told JAKIB Sports. “Just because I felt I was productive coming out of school and things like that and just the way things shake out like I said earlier there’s so many good guys when I got here we just had studs at linebacker so it’s like you’re not going to come in and be the top guy but it just it really just makes you more hungry and it’s something that yeah I carry with me all the time.

Even with the green dot and the role as the defensive leader, the next hurdle is always looming. The 2022 season is the final year on Edwards’ current contract so a step back is not an option.

“It’s easier said than done but I’m really focused on what this team can do this year and let those chips fall where they may,” Edwards said when asked about his contract “It’s not really my focus, and especially, going into the year I’m excited to get out there with this group. I think we have a lot of special guys out there. So that’s that’s really my main goal.”