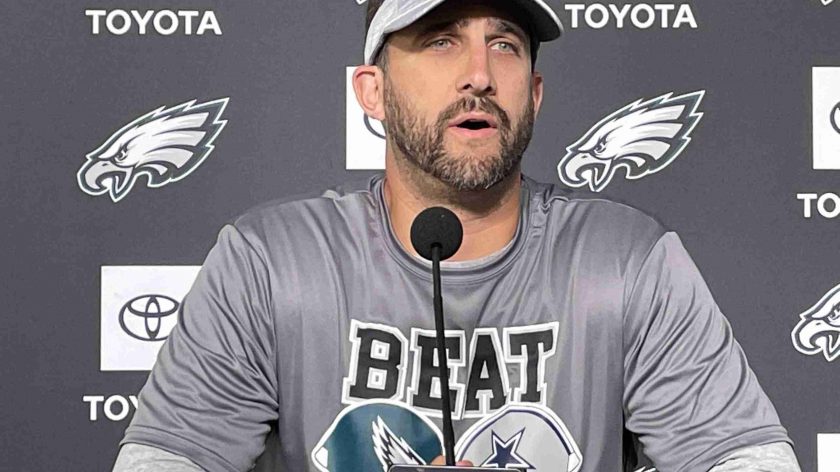 PHILADELPHIA – When Carrie Underwood starts belting out the theme for the NFL’s prime-time showcase this week, you can bet Philadelphia truly will have been waiting all day for Sunday night.

The unbeaten Eagles (5-0) host the 4-1 Dallas Cowboys on “Sunday Night Football”  and the winner will have a leg up on the NFC East and perhaps the top seed in the conference.

“When the Cowboys show up in Philadelphia, they get a warm welcome. It is a fantastic setting. It’s a fantastic game. And I can’t wait to get to Philly,” NBC analyst Cris Collinsworth said via conference call when discussing the game.

“There’s nothing like playing a divisional game for first place,” pre-game analyst and former star safety Rodney Harrison said. “I look forward to seeing both these great defenses continue to play lights out. And there’s nothing like having the Cowboys and the Philadelphia Eagles both relevant.”

While Philadelphia is the only remaining undefeated team in the NFL there are two unbeaten quarterbacks: the Eagles’ Jalen Hurts and the Cowboys’ Cooper Rush, who took over for the injured Dak Prescott in Week 2 and had led Dallas to four consecutive victories, including an impressive 22-10 win over the reigning Super Bowl champions Los Angeles Rams last week.

Harrison, who dealt with many great quarterbacks in his career, has been impressed with Hurts’ development in his second year as a starter.

“It’s the mental aspect. I love his no-nonsense kind of demeanor,” said Harrison. “Even when he came out this weekend, he talked about, ‘Hey, we shouldn’t be happy at 5-0. We’ve still got work to do.’

“To me, that’s setting an example…I’ve been impressed with his improvement as a quarterback, but I just love the leadership and the professionalism. Those guys in the locker room, they respect him, they trust him, and they fight and claw for him.”

The Cowboys will be the toughest defensive test for Hurts and the offense to date, led by star pass rushers Micah Parsons and Demarcus Lawrence, and big-play cornerback Trevon Diggs, who always seems to have the Eagles’ number.

“For me, the Cowboys’ defensive front is just off the charts,” pre-game analyst and former Dallas coach Jason Garrett said. “ It might be the most impressive unit that we’ve seen all year long. The impact of Micah Parsons paired with guys like Demarcus Lawrence, it really is transformative for their team.”

“This is not the defense that you want to get in and drop back in with. When they put up five and they drop Micah Parsons down there, I don’t care who you have in pass protection up front, it’s going to be a long night,” said Collinsworth.

Nick Sirianni has proven to be an excellent game-planner, however, and has so many weapons on offense it’s hard to formulate a plan of who to take away.

From Collinsworth’s perspective, A.J. Brown has been the domino that has helped Sitianni’s offense evolve into the second-ranked group in the NFL that leads the league in explosive plays and turnover differential, the so-called double positives that foreshadow winning.

“I think the body type of A.J. Brown has really helped this team,” Collinsworth said. “… He is such a physical presence in there that if you want to take him on and tackle him, you put yourself in trouble a little bit…I think A.J.’s physical component of this offense has really made a difference. It’s like having another tight end on the field that runs like a wide receiver.”

And Sirianni, with the help of offensive coordinator Shane Steichen, is marrying everything together in a very effective way.

“I think we’re seeing a guy who’s getting more comfortable in the role,” Hall of Fame coach Tony Dungy said. “He knows this team a lot better. I think he’s got a great relationship with this quarterback, and that is always helpful. I think he’s bringing out the best in Jalen Hurts. But I think his team believes in him and the way they do things, and you can see that from the way they play.”