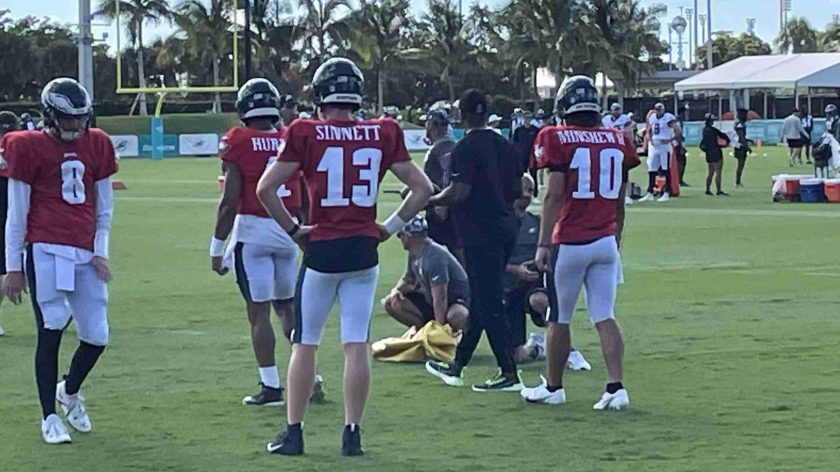 MIAMI GARDENS – Things didn’t go as planned for the Eagles Thursday in Miami.

The Dolphins were forced to cancel the back end of consecutive joint practices due to a stomach virus that hit the team hard overnight.

Miami head coach Mike McDaniel described the issue was with a few players and the goal was to limit any further spread.

“Just trying to be overly cautious so that we didn’t further affect players on the team as it being in the best interest of the Philadelphia Eagles as well … we couldn’t, in good conscience, just move forward,” McDaniel explained.

Eagles head coach Nick Sirianni said he was “bummed,” but wished the Dolphins well before deciding to move to an intrasquad practice on the Dolphins practice field after team medical personnel got a handle on the situation and decided it was safe to move forward.

“I hope everybody with the Dolphins is okay,” Sirianni said. “We don’t have any symptoms on our side. That’s why we’re out here practicing today. Again, I’m not a doctor to know all these things, but after discussing with our trainers and doctors, we’re good to go and good to practice and hope everybody in Miami feels good.”

The shift was a difficult one from an energy perspective because the Eagles’ players were fired up to face another color and still had to engage in a high-intensity practice in the soupy South Florida weather.

“Our guys know how to practice, and they know how to come out here and compete,” said Sirianni. “We’ll talk before practice tell them this is a high-intensity practice, with a lot of work with the ones and get after it, get better from this practice like we try to do every time we come out and practice.”

Sirianni was true to his words and gathered the team before the 70-minute session, heavy on red-zone work, started.

Working red zone was the plan for Philadelphia as well had it practiced against the Dolphins, although it might not have been quite as prevalent unless McDaniel and the Dolphins agreed.

Sirianni also offered surprising praise for his starting quarterback, calling Wednesday’s practice, which was pretty pedestrian from an offensive standpoint, as the best practice Jalen Hurts has had since Sirianni arrived.

“I thought Jalen was outstanding in (Wednesday’s) practice,” Sirianni said. “To me, Jalen’s practice was the best practice he’s had as an Eagle. That’s since I’ve been here. I can’t speak for the year before I got here.”

Sirianni was particularly impressed with how Hurts was handling his reads and progressions, a nod toward taking what the Dolphins defense was giving him instead of trying to force a big play.

“What he was doing with the football and being able to go through reads and progression that fast and getting the ball to where it needed to go, I thought was unbelievable,” Sirianni assessed.

Much of the praise can be attributed to experience and stacking days in the offense with Sirianni offering up the often cursed “the game is slowing down for him” sentiment.

“I think he’s seeing the field really well. I think he’s building that memory bank of plays versus different coverages, and knowing where to go with the football from there,” said the coach. “So, I just think his decision-making process is just continuing to get better — which is common among quarterbacks that are on it, and that are getting better. So, I just think his decision-making is happening fast, it’s happening quickly, and he just keeps getting better at that.”