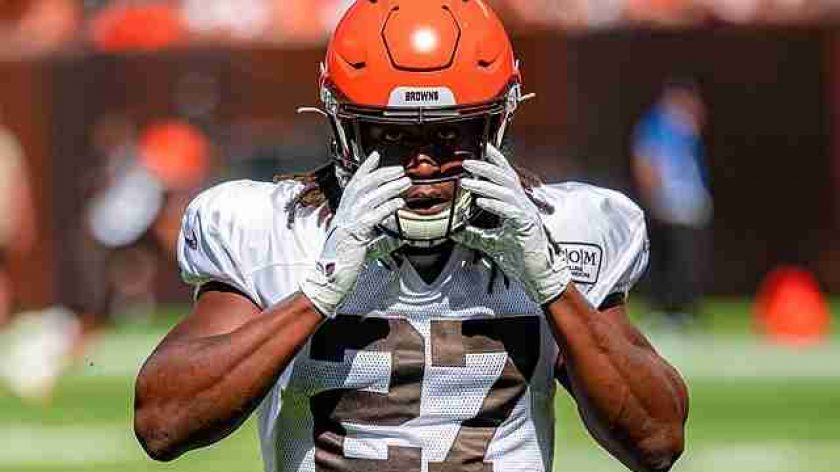 You don’t need the tin-foil hat or the dark web to conjure up a conspiracy theory about Kareem Hunt and the Eagles.

There’s the obvious in that Hunt has asked for a trade and both Browns GM Andrew Berry and his assistant, Catherine Raiche, are very familiar with their former boss in Philadelphia, Howie Roseman. The two teams also just engaged in joint practices with a preseason game to follow on Sunday so each side is very familiar with what the other might have to offer.

Heck, Nick Sirianni even chipped into the rumor mill by sauntering over to talk with Hunt, who did not participate in Friday’s practice, in front of reporters.

Nick Sirianni and Kareem Hunt. I’ll let you guys have fun with this: pic.twitter.com/ghvpJXC0MT

After chatting with a couple of sources from the Browns side, however, the plan in Cleveland is to keep Hunt and build around perhaps the best one-two backfield punch in the NFL, something that has only heightened now that quarterback Deshaun Watson is locked in to miss 11 games on a personal-conduct policy suspension due to allegations over sexual misconduct.

If backup Jacoby Brissett is going to succeed, he will need the rushing attack Nick Chubb and Hunt provide.

Chubb is the lead back for the Browns and one of the top-five RBs in the NFL, something Hunt was earlier in his career as well when the Toledo product and Cleveland native was in Kansas City until being summarily dismissed due to his own off-the-field ugly incident involving domestic violence.

Hunt missed two days early in Browns’ camp when wrangling for an extension or trade but has returned.

What it is is a contract extension. Hunt is scheduled to play on the final year of a two-year, $12 million deal and wanted more security. The Browns, who have big outlays coming in the future to Watson and other stars like edge rusher Myles Garrett, haven’t been interested in talking about the future just yet prompting the trade request.

No one seems to want to lose Hunt in Cleveland, however, including Chubb.

“He’s my best friend, on and off the field,” Chubb told the NFL Network.

The Eagles, of course, are dealing with their own talented RB on a contract year in Miles Sanders and the Penn State product is currently dealing with a hamstring issue.

Sirianni is very disciplined when it comes to avoiding timetables for injuries but Sanders’ history has many worried although the feeling is that the current handling of the RB1 is precautionary with the goal of Week 1 in Detroit far more likely than not.

Sanders’ presumptive backup, second-year player Kenny Gainwell, hasn’t had a great camp and was lambasted by Sirianni in practice on Friday for two mental errors.

From there Boston Scott just returned from a concussion and is solid as a backup player but not thought of as more than that by the Eagles while both Jason Huntley and undrafted rookie Kennedy Brooks look better suited for the practice squad than the 53.

Hunt makes perfect sense from a football-only perspective for Philadelphia and would be the best back the Eagles have the minute he showed up but the harsh reality is Cleveland holds all the cards and doesn’t want to trade the player, something Browns reporter Daryl Ruiter emphasized while appearing on JAKIB Sports’ BIRDS 365 program.

“No, you can’t have Kareem Hunt,” Ruiter laughed. “If I’m Andrew Berry ‘No,’ respectfully, deal with it.”

Ruiter then went on to explain the situation in detail.

“Kareem, he’s a Cleveland native so he does want to be here. He just wants the security,” Ruiter explained. ” He’s in the final year of his deal with incentives and he’s going to make about $6.25 million which is pretty good money for a No. 2 running back. … [Hunt] is a legit top running back and Stump Mitchell, his position coach, was like yeah he could be the best in the game. He’s that good so that is a luxury I’m not giving up
and especially if I’m Andrew Berry because I need every weapon to surround Jacoby Brissett with.”