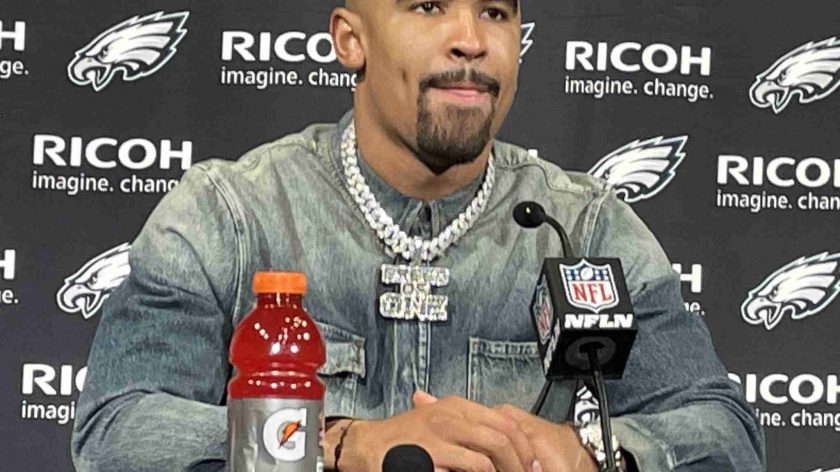 PHILADELPHIA – The parallels were striking.

In the ensuing years, Philadelphia moved on to Nick Sirianni and Jalen Hurts and an even more talented team than the Super Bowl winners dismantled the New York Giants by the very same score in the divisional round of the playoff, earning the Eagles a berth in the NFCCG against the winner of Dallas at San Francisco on Sunday.

“Well, crash landing here. Give Philly credit. They did everything better than we did today,” Giants head coach Brian Daboll admitted. “Tough game. We really got beat in all facets, so it wasn’t one thing in particular. It was a team game and we just didn’t get it done. Congratulations to Philly. They get to move on and unfortunately, we don’t.”

The Eagles beat the Giants three times this season, although the Week 18 affair was a bit of an outlier with New York resting its key reserves and Philadelphia taking its foot off the gas.

In the two games that mattered the Eagles routed New York, 48-22, on Dec. 11 at MetLife Stadium and the 38-7 victory on Saturday night. The aggregate score of 86-29 is almost unthinkable dominance of another playoff team.

“We couldn’t get anything going offensively,” said Daboll. “Couldn’t stop them on third downs or red zone. Running the ball was a collective effort in terms of not being able to get it done. So that starts with me. I appreciate our team. I told those guys I appreciate their effort. The entire year, their work ethic, people in the organization. But Philly deserved to win that game. It’s a crash landing in the playoffs. Losses hurt. These losses hurt even more.”

As a team, the Eagles ran for 268 yards and a 6.1-yard-per-carry average with Kenny Gainwell

Boston Scott did what he always does against the Giants, and that is score a touchdown. This one came from three yards out with 7:29 to play in the second quarter which opened the Eagles’ advantage to 21-0.

On the drive, Sanders ran six straight times for 43 yards. For the game, the Eagles RB had 90 yards on 17 runs, but it was Kenny Gainwell who stole the rushing spotlight, finishing with a career-high 112 on 12 runs. His 35-yard TD run with 1:51 to play in the game capped the scoring.

As for Scott, he has played nine career games against them and has at least one TD in all of them. Of his 18 career scores, 11 have come against New York. He had 32 yards on six carries.

In the first half New York was even worse than those numbers indicate, amassing only three first downs and 64 total yards of offense as the Eagles built an insurmountable 28-0 lead at halftime.

“I think it was very important for us to come out and start fast,” said quarterback Jalen Hurts, who played very efficiently and he’s up well physically after being limited over the past month with an SC joint sprain in his throwing shoulder. “As a football team, we just came out and played with a lot of energy. We prepared really well throughout the week, and you’re always talking about challenging everybody to play their best ball.

Giants QB Daniel Jones was harrassed to the tune of 15-for-27 passing for 135 yards. Saquon Barkley has just four carries for seven yards in the first half before getting a little breathing room in garbage time and finishing with 61 yards on nine runs.

The Eagles sacked Jones five times. Haason Reddick and Josh Sweat each had 1 1/2, Fletcher Cox had one, and Brandon Graham added another.

“They are good. They are a good team, good defense, good front, and a good secondary,” Jones said. “Give a lot of credit to them because they played well.”