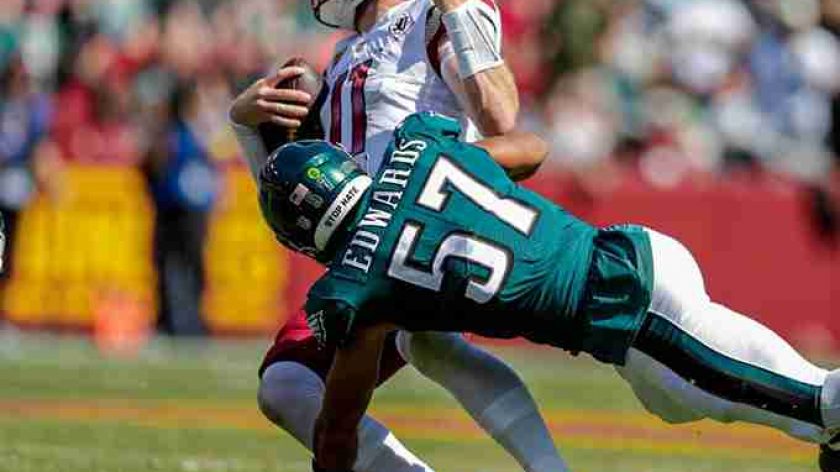 LANDOVER, Md. – Carson Wentz never handed the baton to Jalen Hurts in Philadelphia. The one-time face of the Eagles’ franchise was forced to make the hand-off and recede to the background while a perceived placeholder took over in the death throes of the Doug Pederson era.

On Sunday, in the shadow of the nation’s capital, it was the one-time understudy serenaded with MVP chants on the “road” and the former No. 2 overall pick creeping dangerously close to flaming out in his third city over three seasons, a punchdrunk fighter forced to listen to scattered booing after being sacked nine times and hurried on 17 occasions during an emphatic 24-8 Philadelphia win.

The always classy Jalen Hurts refused to rub salt in what surely was plenty of wounds from both a physical and mental perspective for the player who once stood atop the emerging third-year QB on the Eagles’ depth chart.

“I just think it’s very good for us to come in here, Week 3, and get another win,” Hurts said. “It’s a faceless opponent to me.”

The only playbook Wentz stuck to was afterward, defaulting to cliches in the wake of an onslaught.

“That is a good defense. That’s a good team,” Wentz said. “They got after us and I did not play to my standards, especially early.

The game turned with an all-too-familiar twist for Philadelphia fans. Down 3-0 after a 32-yard Jake Elliott field goal, Wentz and the Commanders got the football back with an opportunity to answer.

Antonio Gibson kept Washington on schedule with a 4-yard run over left tackle before Wentz dropped back on second down. The Philadelphia game plan was simple: take away Wentz’s first read and force him to hold onto the football, a scenario where the veteran often tries to do too much at the expense of ball security.

The plan turned out to be a textbook example of foreshadowing when Wentz dropped back and hesitated to get rid of the football before Brandon Graham went all Super Bowl LII on his former teammate. Two plays later, Dallas Goedert was deftly handing a tight end screen for 23 yards and a touchdown.

In 90 seconds of game time, it went from a scoreless tie to 10-0 Philadelphia.

“I’ve got to protect the ball,” Wentz said. “Any time the pocket is collapsing around me and I’m trying to make a play, I’ve got to keep two hands on it.”

The game was essentially settled but actually learning the importance of ball security in NFL season No. 7 is not in the cards for Wentz. Set to turn 30 in December, Wentz will continue to make the same mistakes until it’s disallowed.

By halftime, Sunday’s game was over with the Eagles on top 24-0 but you can’t waive off NFL games so the last 30 minutes served as gloried garbage time obfuscating the dominance by Philadelphia when things actually mattered.

The total offense in the first half was 322 to 50 with the advantage Eagles. Hurts was 18-of-27 for 279 yards with three touchdowns and a 137.7 passer rating while Wentz was 3-of-10 for 24 yards and when you added in the six sacks Wentz inhaled the Commanders had minus-16 passing yards.

“One thing we really wanted to do was get after [the quarterback] and get him to known-pass [situations],” Eagles coach Nick Sirianni said. “I think we did a really nice job of getting him to known pass, and then our defensive line, they just went out and hunted.”

The hollow numbers Wentz was able to generate in the second half — he finished the game 25-of-43 for 211 yards — served as evidence only for the disingenuous.

“Our standard is our standard, and I’m just happy that we finally got one of them games where we had a nine-sack game and we were out there having fun,” Graham said. “We just played together. The biggest thing for us is making sure we do what we do and not worry about anything else.

“We played together, and we made sure we never we never let off the gas.”