Run, Jalen, run: those who think Eagles are putting their QB in harm’s way too much just don’t get it 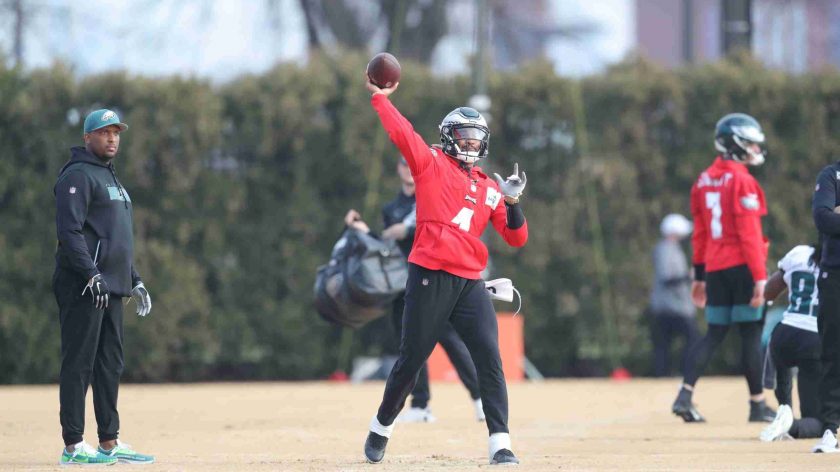 Jalen Hurts has 156 rushing attempts this season, which leads all NFL quarterbacks and is the third most ever by a quarterback in a season, surpassed only by Lamar Jackson’s 176 carries in 2019 and 159 in 2020.

No one seemed to be fretting much about how many times Hurts was running the ball until he sprained his throwing shoulder on a zone read late in the third quarter Sunday after getting body-slammed by Bears defensive end Trevis Gipson.

Since Hurts’ injury, a lot of people have been questioning the wisdom of a coach allowing his quarterback to put himself in harm’s way so much.

They ignore the fact, of course, that Hurts’ running is a big part of who he is and why he is an MVP candidate, and why the Eagles have been so successful.

Without Hurts’ 42 rushing first downs, which are the second most in the league behind only NFL rushing leader Josh Jacobs’ 83, and without his 13 rushing touchdowns, which are second to Lions running back Jamaal Williams’ 14, the Eagles would not be 13-1 right now.

I wholeheartedly agreed with Nick Sirianni’s response earlier this week when he was asked whether, in light of the fact that this is the second year in a row that Hurts has gotten injured later in the season, he needs to reevaluate the way he deploys his quarterback.

“The (ankle) injury last year was in the pocket on a sack,’’ Sirianni pointed out. “This injury was on a zone read. For us to be the explosive offense that we want to be. . . Jalen Hurts is a very good passer, and he’s shown that he’s become a better passer with each game that he plays.

“We’re always going to think about his safety first. I know you guys are, like, well, he got hurt. But he also ran for 180 yards (actually 157) against Green Bay and he didn’t get hurt in that one. I get that that’s going to be part of the scrutiny, and I understand that. But we are who we are as an offense because Jalen can do so many things, both running and throwing the football.’’

There’s no question that Hurts took a pretty good beating Sunday. Gipson’s body slam was one of a season-high five hard hits outside the pocket on the Eagles quarterback. The Bears’ defense clearly went into the game with a plan to inflict as much pain as possible on him whenever he ran the ball. It’s a pretty common approach for defenses to take with running quarterbacks.

But the fact of the matter is, the Bears game was the exception, rather than the rule this season. Hurts is not the Bills’ Josh Allen. He’s not a reckless runner who seeks out contact and disregards his body. He’s one of the smarter sliding quarterbacks in the league. He gets out of bounds whenever possible.

A league-high 16 of Hurts’ 156 rushing attempts have been kneel downs. Twenty-eight others have been quarterback sneaks.

Hurts has 15 or more rushing attempts in six games this season. I went back and looked at every one of his runs in four of them, including the Bears game.

He had 17 rushing attempts against the Bears. Two were kneel downs, two were sneaks, three were runs out of bounds and two others were runs where he wasn’t hit. Three others involved routine contact. But the Bears managed to get five good licks on him, which is more than any team this season.

The other three games I reviewed were the Eagles’ wins over the Lions, Packers, and Jaguars. He carried the ball 50 times in those three games. The breakdown of his runs:

So, you need to look deeper than just how many carries he has this season. Keep in mind also that Hurts isn’t a withering flower. He’s a quarterback in a 225-pound fullback’s body. He has squatted and deadlifted 625-plus pounds.

Also keep in mind that quarterbacks get hurt in the NFL, regardless of their style of play. With three weeks still left in the regular season, just 13 quarterbacks have started every game. Some of the changes were based on performance. But most were because of injury.

Hurts had five rushing first downs against the Bears Sunday, including the three on his three touchdown runs. They needed every one of them or they’d be taking a 12-2 record into Saturday’s game against the Cowboys.

Hurts is 10th in the league in runs of 10 yards or more with 26. Teammate Miles Sanders is third with 32.

–Hurts threw a career-high 13 deep balls (passes that traveled 20 or more yards in the air) against the Bears. He completed four of them for 156 yards. He’s thrown 26 deep balls in the last three games. That’s just two fewer than he had in the first 11 games. Much of that has been dictated by coverage. The Bears played man coverage on the Eagles’ outside receivers almost the entire game. The Eagles liked the matchups and attacked them down the field. Three of Hurts’ four deep-ball completions helped set up his touchdown runs.

–Hurts attempted 10 passes after he hurt his shoulder on the next-to-last play of the third quarter. He completed seven of them. Three of those 10 passes were deep balls. He also ran the ball four times after injuring his shoulder. Three of those runs resulted in first downs and one produced the game-winning touchdown. Bottom line: his injury is nothing to worry about.

–Gardner Minshew, who will start Saturday against the Cowboys, started two games last year – a 33-18 Week 13 win over the Jets and a 51-26 Week 18 loss to the Cowboys in which most of the team’s starters sat out to rest for the playoffs. Minshew completed 20 of 25 passes for 242 yards and two touchdowns against the Jets. Was 19-for-33 for 186 yards, two TDs, and one interception against the Cowboys. Thirty-one of his 39 completions in those two starts were passes that traveled 10 yards or less.

–Minshew had a 93.1 passer rating in his 20 starts with Jacksonville in 2019-20. Threw 37 touchdown passes and just 11 interceptions in those 20 starts. Ran the ball 96 times for 497 yards and 30 rushing first downs with the Jags. Had nine carries for 21 yards in his two starts last year.

–The Cowboys are first in the league in takeaways with 26, one more than the Eagles. Ten of their takeaways have come in the last three games.

–Interestingly, Prescott has been boom-or-bust on third-and-long this season. He has the second-best percentage in the league of third-and-seven-plus-yard passes that have produced first downs (46.5%, 20 of 43). But he’s also thrown the most interceptions on third-and-long (5). He’ll be facing an Eagles defense Saturday that leads the league in both sacks (30) and interceptions (8) on third down. A league-best nine of Haasan Reddick’s 12 sacks have been on third down. Six of Javon Hargrave’s 10 sacks, five of Fletcher Cox’s six sacks, and 4 ½ of Josh Sweat’s 9 ½ sacks have been on third down.

–The Eagles and Cowboys are 1-2 in the NFL in red-zone offense. The Eagles have a 73.5 touchdown percentage inside the 20, and the Cowboys 71.8. Fewest field goals wins Saturday.

–Just three of the 18 touchdown passes that the Eagles have given up this season have been to tight ends. That’s a considerable improvement over last year when tight ends caught 13 TD passes against the Eagles, including four by the Cowboys’ Dalton Schultz. Schultz didn’t play in their Week 6 meeting in October.

–The Eagles have used 11-personnel 71% of the time this season, including 81.7% Sunday against the Bears. In the first game against the Cowboys, however, they used 11P a season-low 57.3% (39 of 68 plays). That was largely because they preferred having an extra tight end on the field to help deal with Cowboys edge rusher Micah Parsons, especially after right tackle Lane Johnson suffered a concussion late in the first half.

–The Eagles have run an NFL-high 153 RPOs this season. The Atlanta Falcons are second with 135 and Baltimore is third with 122, according to Pro Football Reference. One hundred five of those 153 RPOs have been pass plays. The Eagles are averaging 9.4 yards per attempt on RPO passes and 4.5 yards per carry on RPO runs.

–For just the fourth time this season, the Eagles failed to score on either their first or second possession against the Bears. They have scored on both of their first two possession four times — against the Giants, Packers, and Steelers and in their lone loss to Washington.

–Opposing quarterbacks have a 57.5 passer rating against the Eagles on third down, including a 53.8 completion percentage and 6.3 yards per attempt.

–One hundred seventy-one of Hurts’ 315 passing yards against the Bears came on third down.