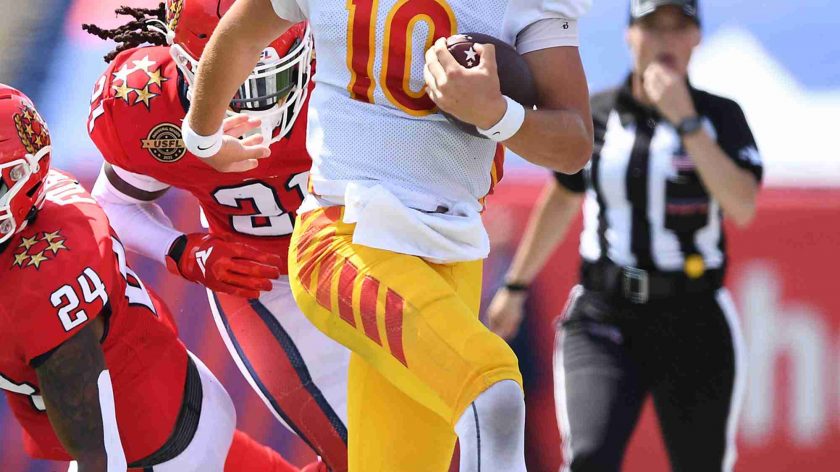 Death, taxes, and the Stars in the USFL Championship Game.

In its first incarnation in the mid-1980s, the USFL has three title games and the Philadelphia/Baltimore Stars were in every, single one of them, losing to the Bobby Herbert-led Michigan Panthers in the inaugural championship affair in 1983 and then winning the next two over the Arizona Wranglers and Oakland Invaders, the latter of which after the franchise relocated to the Charm City.

Although the current version of the USFL has little to do with the defunct original, save for some intellectual property, the Stars made it 4-for-4 on Saturday in Canton, upsetting the New Jersey Generals, 19-14, for a berth in the title game some 37 years after the last original USFL championship tilt in 1985.

The Stars went 6-4 in the regular season to finish second in the North Division before knocking off the 9-1 Generals to mean the North’s bid to next week’s championship game.

The Stars’ Maurice Alexander had a go-ahead 87-yard punt return for a touchdown with just 1:41 remaining to put the Stars on top and essentially clinch the title berth.

THE @USFLStars DON'T QUIT 🌟@_hardtime3 takes back the lead with a HUGE punt return TD pic.twitter.com/0e1TB8iDAT

Philadelphia will face 10-1 Birmingham, who dispensed of the New Orleans Breakers, 31-17, in the other semifinal on July 3 in Canton.

All of the USFL’s regular-season games were played at one site in Birmingham with the playoffs moved to the Hall of Fame Village in Canton.

The Stars made their run despite losing starting quarterback Bryan Scott to injury, moving to former Northern Arizona star Case Cookus as their on-field leader.

Cookus spent time in camp with the New York Giants, as well as Denver, Minnesota, and Las Vegas over the past two years.

-John McMullen is the managing editor of JAKIBSports.com.