Philadelphia Eagles with the Most to Lose 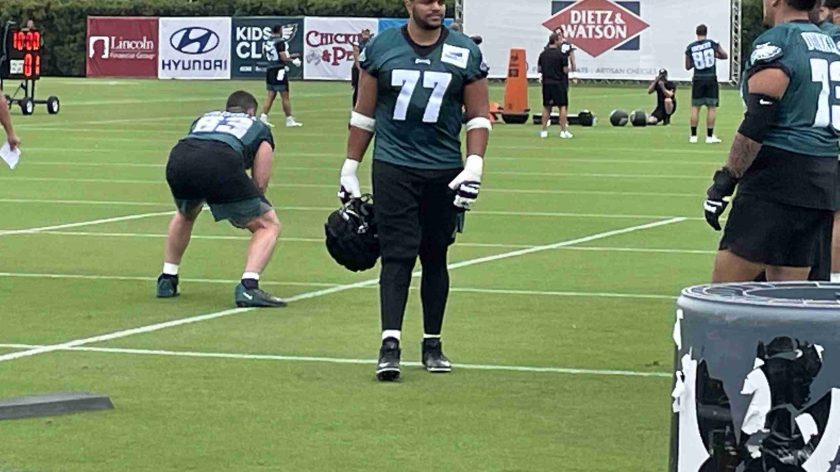 There is plenty to be excited about as the return of football has finally arrived. Philadelphia is set to embark on a season that most people believe and expect will be a memorable journey. There are still plenty of unknowns along the roster who need to shine during training camp to get valuable playing time or simply make the team.

The conversation of filling out who deserves to make those last couple of roster spots is paramount. Yet, there are certain players who will most likely make the roster but will be on a short leash throughout the season. Putting together an impressive preseason campaign is essential, but that success needs to carry over to the season.

As he enters his third NFL season, Davion Taylor has to show that he is a necessary asset on this roster. The linebacker room has finally gained some much needed depth and talent, but Taylor does not find himself atop the position right now. Taylor has served as nothing more than a role player in Philadelphia’s defense, while he has the capability of being more, proving that the coaches in this training camp should be his main focus in such a crowded linebacker group.

While the starting linebackers are likely set to be T.J. Edwards, who continues to impress, and newcomer Kyzir White, the battle to cement his second-string spot is in jeopardy. With the likes of highly-touted rookie Nakobe Dean, former Temple Owl Shaun Bradley, and even late-round draft pick Kyron Johnson all fighting for playing time, Taylor has his hands full.

There is a lot on the line for Taylor this season, but he just needs to stay ready and healthy for the opportunities he receives. Injuries to his calf and knee have plagued him throughout his last two seasons. Aside from the health issues, Taylor has the ability to be a trusted playmaker, it is simply a matter of whether he can consistently produce when given the chance, all injuries aside.

When Wallace was drafted in 2020, there were numerous opinions that his selection was a steal in the draft. After the injury and eventual departure of Rodney McLeod and Malcolm Jenkins, the prominence at safety has not been too prevalent. Although there have been chances for Wallace to show up, whether it is in games or practice, he clearly has not done enough.

Joining the team as a compelling prospect is enough, especially when he was a mid-round selection. Wallace has solid experience with the defense, but the bulk of his snaps have been on special teams. The former Clemson Tiger will need to excel in training camp and manifest the reality of him becoming a valuable member of this defense.

As far as his competition goes, the new veteran addition Jaquiski Tartt is likely a lock to make the team and expect a strong amount of playing time. Tartt will be fighting for a starting spot alongside either Marcus Epps who appears to be thoroughly impressing beforehand and during training camp. Anthony Harris’ versatile play style is also in the conversation for him to take a starting spot. Wallace will remain undeniably busy working to gain leverage on those more favored options. Meanwhile, he will also be fighting off players behind him on the depth chart working to get one of those final roster spots.

Throughout his time in Philadelphia, the former Washington State standout has only received playing time if starters were injured. Coming in as a first-round selection in 2019, expectations of solidifying him as the team’s new left tackle have never become a reality. Dillard had the chance to win the spot last year, but he was beaten out by Jordan Mailata, who has thoroughly impressed with the team and throughout the league.

The battle with Mailata may have been Dillard’s final opportunity to become more than a backup in Philadelphia. After losing, it’s safe to say that his time to become a potential starter in Philadelphia has been dissolved. His amount of offensive snaps per season, 338 snaps, are not where they should be as a former first-rounder. With the current status of the offensive line, Dillard is once again in a tough spot to become more than just a backup.

A history of injuries in his short NFL career has greatly affected his current situation. Dillard’s chance to earn the starting spot in 2020 was thwarted by season-ending bicep tears. Last season, knee injury complications were the next struggle. If Dillard is able to have a good training camp and remain healthy, he can remain a good backup option for Philadelphia. Yet, Dillard has the capability to be a decent starter in the NFL, so an eventual change of scenery may be in the cards.

The wide receiver room is providing plenty of optimistic vibes for the first time in a while. Yet, where there are intriguing choices within the receiving core, there are also difficult decisions. Greg Ward has been with Philadelphia since the Super Bowl season, serving as a practice squad player. His work ethic to become a solid and reliable option in the offense is commendable, no matter how small his role becomes.

With so much explosive talent along the Eagles’ collection of receivers, it is hard to see how Ward can earn a spot on the roster. After A.J. Brown, DeVonta Smith, Quez Watkins, and Zach Pascal, who are undeniable names to make the roster, there are so many options to turn to ahead of Ward. His presence with the team for an extended period of time gives him an edge over those he is competing with. It is hard to say if his reputation and experience with the team are enough to ensure a spot. Especially when noticing his major drop-off in offensive snaps, 791 in 2020 and 245 in 2021.

The former Houston Cougar faces his toughest situation to date, in terms of making an NFL roster. The numerous options likely behind Ward have plenty of work to do, but Ward’s largest competition will be with Jalen Reagor. If Philadelphia is not able to find a trade partner to deal Reagor elsewhere, the organization’s personal obligation to give Reagor one more chance, being a former first-rounder, hurts Ward’s chances. Therefore, Ward must thoroughly impress the team more than Reagor will, but that is no simple task as it has been a trend for Reagor to be a standout during training camp season.