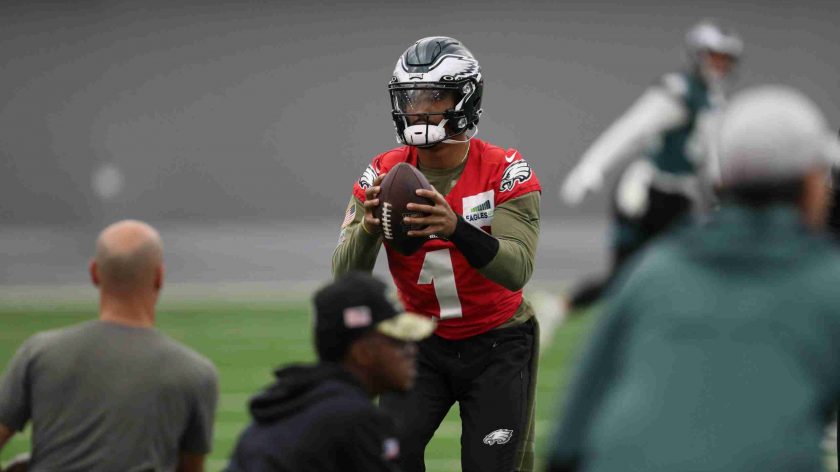 Remember all of those ridiculous stories and cockeyed scouting reports questioning Jalen Hurts’ arm strength and his ability to throw the deep ball?

You’re not hearing much of that nonsense these days, particularly after Hurts’ performance in the Eagles’ 24-8 win over Washington.

Through three games, Hurts has completed five of 11 deep balls (20-plus yard throws). That’s the league’s ninth-best deep-ball completion percentage. He also is 10-for-16 on throws of 11-19 yards.

Hurts, who was in the bottom third of nearly every pertinent statistical passing category last season, currently is fifth in passing (106.5 rating), first in yards per attempt (9.3), fourth in passing yards (916), and eighth in completion percentage (67.3).

Hurts averaged a career-high 12.8 air yards per attempt against Washington. That was up from 9.2 against the Vikings in Week 2 and 5.6 against the Lions in Week 1.

Last season, the Eagles finished 26th in pass completions of 30 yards or more. Had just 14 of them in 17 games.

Through three games this season, they already have seven. That’s the second most in the league. The only team with more is Miami (8), who has played one more game than the Eagles.

–Hurts’ 37 rushing attempts are the most by any quarterback. The Bears’ Justin Fields is second with 27 carries. The Ravens’ Lamar Jackson has 26, and the Giants’ Daniel Jones has 25.

–His three rushing touchdowns are tied for the third most in the league, behind only the Browns’ Nick Chubb and the Lions’ Jamaal Williams. Both have four.

–Hurts has 91 rushing first downs in 22 career starts, including 10 this season.

–Hurts had two red-zone touchdown passes against Washington. He has just six in his last 11 regular-season starts.

The rush is on

–The Eagles’ nine sacks of Carson Wentz Sunday were their most since they racked up 10 against the Jets’ Luke Falk (9) and David Fales (1) in a 31-6 win in 2019. For what it’s worth, they had just one the next week in an 18-point loss to the Vikings.

–Jonathan Gannon’s defense blitzed on 12 of 52 pass plays last week (23.1%). The week before, they blitzed on 10 of 48 pass plays against the Vikings (20.8%). Just two of their nine sacks against Wentz came on blitzes. They were their last two of the game, in the fourth quarter. Linebacker T.J. Edwards notched his first of the season on a second-and-10 blitz, and Brandon Graham got one on a second-and-12 blitz.

–Wentz was 4-for-10 for 28 yards against the Eagles’ blitz Sunday. Vikings quarterback Kirk Cousins was 2-for-10 for 21 yards with two interceptions when the Eagles blitzed him.

–Fletcher Cox, who had 1 ½ sacks against Washington, is tied for the team lead in sacks with three. Last year, he had 3 ½ the entire season.

–Brown is tied for sixth in the league in receiving first downs with 14. He’s tied for second in third-down catches that have resulted in first downs (6). Denver’s Courtland Sutton is first with 7.

–Brown, Smith, and Goedert have combined for 46 receptions and 34 receiving first downs.

–The Eagles ran three screens against Washington. Goedert took one for a 23-yard touchdown. Smith picked up 13 yards on another.

–Brown and Smith both had a red-zone TD catch against Washington. Those have been Hurts’ only two red-zone TD throws so far.

–The Eagles have run 86.5 percent of their offensive plays (180 of 208) from shotgun. That’s the second-highest percentage in the NFL. Only Arizona has been in shotgun more often. They’ve used it a whopping 95 percent this season. Last year, the Eagles used shotgun 83 percent of the time. Several of the Eagles’ 28 plays from under center this season have been on their last possession when the game already has been decided and they’re just trying to run out the clock. They’ve attempted just one pass from under center in the first three games.

–The Eagles’ offensive line got the highest grade in the league from Pro Football Focus for the third straight week. No one on the line allowed more than two pressures against Washington. Through three games, the line has been responsible for just one sack (LT Jordan Mailata), two hits (LG Landon Dickerson and RG Isaac Seumalo), and 14 hurries.

–The Eagles are second in the league in third-down efficiency (48.9%). Only Buffalo has been better (61.0%). The Eagles also have converted four of six fourth-down attempts.

–Sixty-five of the Eagles’ 86 points have been scored in the second quarter. They have yet to score a point in the fourth quarter.

–The Eagles’ average drive start against Washington was the 29.5-yard line. That was significantly better than the 17.4 against Minnesota. Four of the Eagles’ 13 possessions against the Commanders started at their own 40 or better.

–Hurts has a 70.3 completion percentage and is averaging 9.8 yards per attempt with 11-personnel this season.