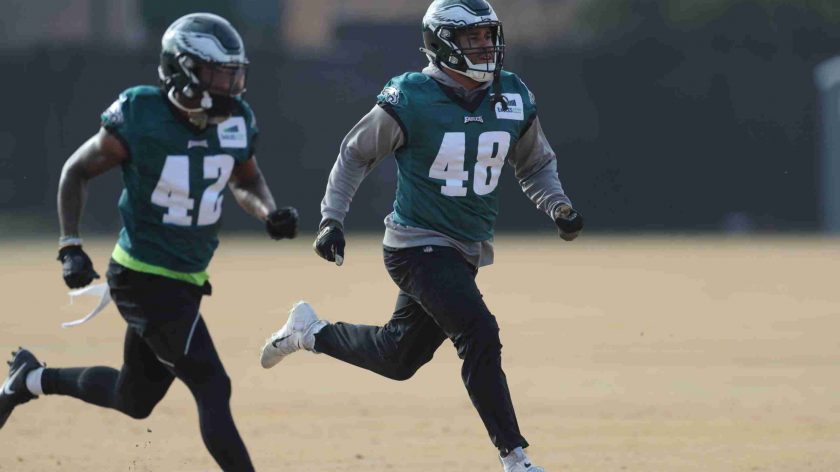 MIAMI GARDENS, Fla. – Patrick Johnson was no sure thing to make the Eagles, especially after the team drafted the athletic Kyron Johnson in the sixth round back in April.

The thought entering training camp was that the Eagles could only keep one backup to star pass rusher Haason Reddick at the SAM linebacker overhang spot and in the battle of the Johnsons, Kyron seemed to have the inside track.

A competition never really developed as Patrick Johnson solidified his role on the team with an excellent summer, capped off with a sack of Tua Tagovailoa in Saturday’s disappointing 48-10 setback to the Dolphins.

Johnson’s sack was the thin line behind three touchdowns in three possessions for Tua and the Dolphins’ starters against the overmatched Philly second-teamers.

“It’s something that I did in college a lot, so I have a lot of experience with that,” Johnson said of his pass-rushing skills. “Coach (Nick Sirianni) is giving me an opportunity to go out there a ball out, get sacks, (and) put the offense behind the chains. I just got to keep on doing that, and hopefully everything works out great.”

The results obviously weren’t there for the Eagles as a whole but Johnson finished off his summer well.

“You never know when your last one is, so I take advantage of everything that I ever get,” Johnson said. “It was a great opportunity to go out there and play with a bunch of guys that I enjoy playing with, so there’s no weird thoughts about that.”

It’s also clear that this isn’t the last one for Johnson in Philadelphia and if the Eagles want to keep Kyron Johnson on the 53, they will have to make room for three SAM LBs.

Patrick Johnson has made this football team which should come as no surprise to those who’ve been paying attention to what defensive coordinator Jonathan Gannon has been saying about Johnson.

“My whole progression throughout the camp feels pretty good. It comes from a lot from coaching, just putting the hard work in, getting in the mindset and going out and performing every day, and I felt like I did a pretty good job this game.”