On Snubs and Stewardesses: How Nick Sirianni Connects with Players 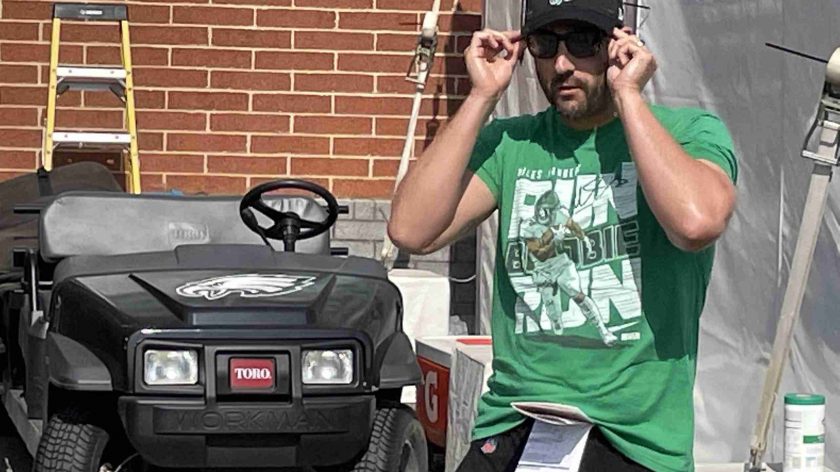 All eyes are always on an NFL head coach.

That’s something Eagles mentor Nick Sirianni is very cognizant of and takes very seriously when it comes to his players. You can’t necessarily control public perception as a coach but you can at least attempt to steer an in-house culture in a positive direction.

“You’re setting the tone there.”

Like most people, Sirianni is a product of his environment and he’s become very adept at using the teachable moments in his own life to better illustrate the five core coaching principles — connecting, competition, accountability, football intelligence, and fundamentals — he wants to instill with his football team.

The first and most important principle to Sirianni isn’t even about the game of football.

“Connection” is the foundation of everything Sirianni tries to do as a leader and it dates back to his youth almost by osmosis when he noticed former players stopping by his house to pay respect to their old coach at Southwestern Central High School in Jamestown, NY, Sirianni’s dad Fran.

The point was further hammered home for Sirianni by a father figure years later with his former college coach, Larry Kehres, at Mount Union. The Eagles’ coach respected Kehres so much (and still does) that a perceived snub 20 years ago has stuck with Sirianni ever since.

“If anyone knew [Kehres] it was me,” Sirianni said. “So I remember this one time I held the door for him … and he was in the middle of a conversation. I was like, ‘What’s up, Coach?’ And he didn’t say anything to me. And for two days I was like, ‘Am I going to start next week? Am I the starter next week?’”

For 48 hours, Sirianni’s mind raced and the moment is still frozen in the coach’s psyche two decades later.

“I’ve had that story in my head since 2002,” he said. “Just the fact that I realize everybody needs a little bit of attention.”

Sirianni is now Kehres to 90 professional players set to gather at the NovaCare Complex next week for training camp and the goal is to make sure every single one of them from entrenched superstars like Jason Kelce and Lane Johnson all the way to Keric Wheatfall, who earned a spot on a tryout in rookie camp, feels valued.

“… I was going to come over and say hello to [the media during OTAs] during stretch, and it was like, ‘No, I need to talk to these guys during this time and I need to have a meaningful conversation. Not more so than just say, ‘What’s up?’ A meaningful conversation with a couple of guys because I know that will go a long way because you’re pulled in a lot of directions, but the players are the most important thing,” the coach explained.

Sirianni can’t talk to every player at every practice but the mental red light from 1 through 90 is always on him, something the coach realized from his own fear of flying.

“I didn’t fly a lot as a kid, so when I first got to college and we would play an away game, it was the first time I would fly. And I was nervous about it and nothing really changed there in college with the couple of flights I took,” Sirianni said. “And then as I got in the NFL and coaching, I was still [a nervous flyer] and every time I would look at the stewardess.”

In Sirianni’s mind, the stewardess was the one with the experience and if she was calm, his tension would ease.

“If she was [acting calm], I was like, ‘OK, she knows what she’s doing,’ and I would relax a little bit,” Sirianni said. “And I think that’s a similar way I’ve got to look at things.”

That was a work in progress for Sirianni as a rookie head coach on the sidelines, something further amplified by former Villanova coach Jay Wright, the local Hall of Fame mentor who has become a friend and sounding board for the Eagles coach.

Sitting courtside Sirianni watched Wright’s awareness when it came to dealing with officials after a shaky call and the impact it had on his team.

“[Wright] was visibly upset with the referees. And then you could kind of see that his players were starting to look to him,” Sirianni said. “When he [looked back], he calmed down, he looked at them – I distinctly remember one of his players looking at him, and he was like, ‘Hey [get your head back into the game]’ and he made his coaching point to his players. He was still pissed, I could tell [but] then the player stopped what he was doing with the ref, and then continued on with the play.

Life is about experiences and Sirianni makes the most of his.