Nothing to see with Nakobe Dean’s playing time 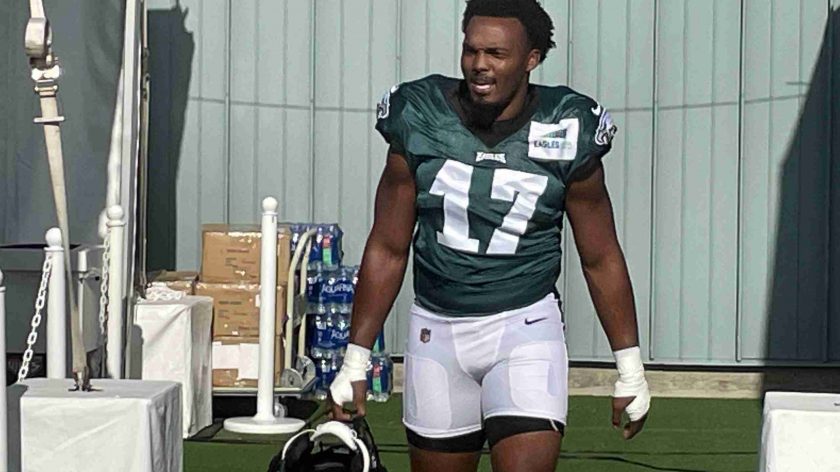 PHILADELPHIA – Nakobe Dean isn’t playing right now and the reason for that should be obvious but the rookie linebacker’s high-profile college career is complicating matters for some fans.

Not for the Eagles’ coaching staff, however, which is basking in the play of veterans T.J. Edwards and Kyzir White while also enjoying the luxury of a young backup with a high ceiling as a prospect.

“I like where Kyzir [White] and T.J. [Edwards] are at,” defensive coordinator Jonathan Gannon said on Tuesday when asked about Dean potentially getting on the field. “I think they are playing well with each other, but Nakobe is ready to go.

“…I have no fret of him going in and functioning at a very high level.”

Edwards has graded out as one of the best LBs in the NFL during the Eagles’ 8-0 start, No. 6 overall, according to Pro Football Focus, and in the same rarified air as players like Bobby Wagner, Demario Davis, and Lavonte David. White isn’t at that level, (No. 52 of 81 per PFF) but has been everything Philadelphia expected when it comes to athleticism in the passing game.

In other words, if it’s not broken, it’s not getting fixed on a defense that is No. 3 overall.

Dean, the Butkus Award winner on the Georgia national championship team last season, has played only four defensive snaps all season, one last Thursday in Houston, his first cameo on defense since playing three snaps in the season opener at Detroit.

The third-round pick’s biggest impact has been on special teams where he has had 126 reps, 71% of the team’s total, good for fourth on the team.

Appearing on the Jim Rome Show on Tuesday, Dean understands what’s going on.

“Of course, you want to go out and play, you want to put your best on the field but at the same time we’re rolling, we’re undefeated,” said Dean. “I felt when I came into the league was to do whatever I can do for the team to be the best they can possibly be.

The winning has continued seamlessly for Dean, who has transitioned from a 14-1 season on one of the great defenses in college football history to winning his first eight as a professional. That experience has helped Dean understand what’s at stake each and every week.

“We want everybody’s best shot because they’re going to get our best shot,” he said. “Coming from Georgia, we don’t look at it like we have a target on our back. We’re not the huntee, we are the hunters.

Dean also spoke about the transition that is often glossed over by the average fan. Real-life issues that young men have to navigate while on their own, often for the first time.

“Definitely been different,” Dean admitted. “… Little things like that continuing to mature and be an adult of my own. On the field football is football.

“… It started off with me coming from the south and living in the south my whole life. I moved up north and I live in the city. It’s definitely been different, but as far as living in Philly, it’s been great. The Phillies made it to the World Series, so the city is lively.”

For now, Dean will remain a luxury but Gannon is confident in calling his number if the need arises.

“This guy improves every day, like all our guys,” the DC said. “They take their reps to heart. They try to maximize their reps in practice. He’s playing scout team, as well, like all our twos do, which that’s the head coach. I love how (Sirianni) sets up practice with ones versus twos. Not just scout team. And they play our calls, so he’s getting time on task into our calls with what we have up in the game plan.