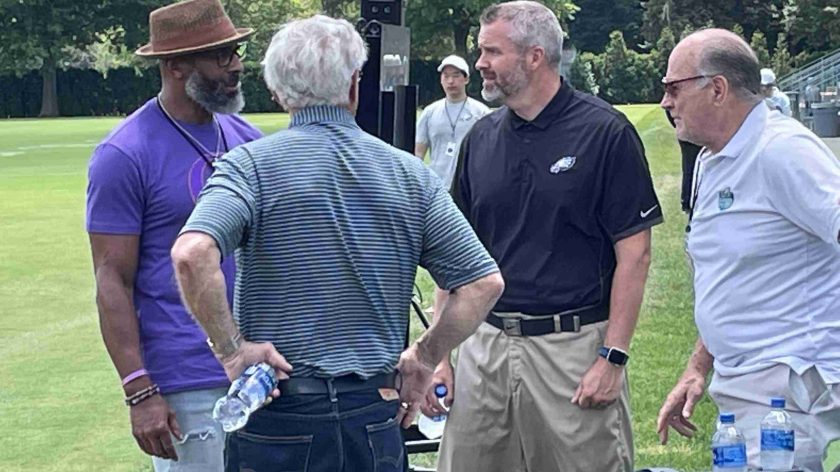 PHILADELPHIA – Nick Sirianni is off to a nice start as an NFL head coach with a playoff berth under his belt as a rookie mentor.

Perhaps someday, the young Eagles coach, who turns 41 on June 15, will be where former Eagles coach Dick Vermeil is booked this summer: Canton and the Pro Football Hall of Fame.

The odds are against that for any mentor, of course, but Sirianni is a lot like his quarterback in that the coach is going to turn over every rock in an opportunity to get better at his job.

One of the avenues Sirianni has used is tapping into the expertise of local coaching legends like Vermeil and now-former Villanova coach Jay Wright, who is already enshrined in the Basketball Hall of Fame as one of only 15 college coaches with two national championships on the resume.

Vermeil is part of the Eagles’ extended family, of course, and organizationally royalty while Wright and Sirianni have become fast friends since Sirianni arrive in the Delaware Valley in January of 2021.

In many ways, Sirianni still has that ‘aww shucks’ air about him despite the fact he’s become the steward of Philadelphia’s passion. Many want to have dinner with Sirianni to pick his brain but the Eagles coach is wowed by the heavyweights in his own profession.

“I feel so honored that they’re willing to share that [wisdom] with me,” Sirianni said. “Coach Wright being an Eagles fan, he’s willing to share with me, and his amount of information that he has, and same thing with coach Vermeil.”

Sirianni readily admits friendly dinners are going to devolve into coach talk when given the opportunity.

“I get to go out to dinner with Jay Wright, one of the best basketball coaches of all time, and Dick Vermeil — and that’s the first time I’ve said ‘Jay’ or ‘Dick Vermeil.’ It’s ‘coach” Sirianni smiled. “And to be able to go out there, and yeah, I’m asking them questions.”

Vermeil was one of many Eagles alumni at an OTA practice last week and is the first of three coaches who led the Eagles to the Super Bowl. He was followed by Andy Reid and Doug Pederson, who finally won one in Super Bowl LII. Vermeil himself ultimately won a Lombardi Trophy in St. Louis.

The son of a coach who still reveres his college mentor Larry Kehres, Sirianni isn’t averse to using the Xerox machine when it comes to sound teaching ideas.

“Everything we learn is from somebody,” Sirianni said. “You don’t just step into this role. You learn it by watching somebody.”

Good coaches are a product of everyone who coached them on the way up, according to Sirianni.

“That’s how I feel like you get into a role like this is because you’ve been so observant about the good coaches you’ve been around in the past and the bad coaches you’ve been around in the past and what you’re going to repeat,” he said. “I’ve had that from the very beginning with my dad, growing up in a coach’s house. I’ve learned a lot of good things there, to college, to the NFL coaches I’ve worked with, like [former Eagles offensive coordinator and current Indianapolis coach] Frank Reich.”

Sirianni is now part of an exclusive club and there’s no shame in utilizing the fringe benefits.

“I got encouragement and support from those guys through the entire year. They have my cell phone number, and I’d get a text from them,” Sirianni said. “Win or lose, when it felt like I needed a good text of some support or some advice, I was getting that.