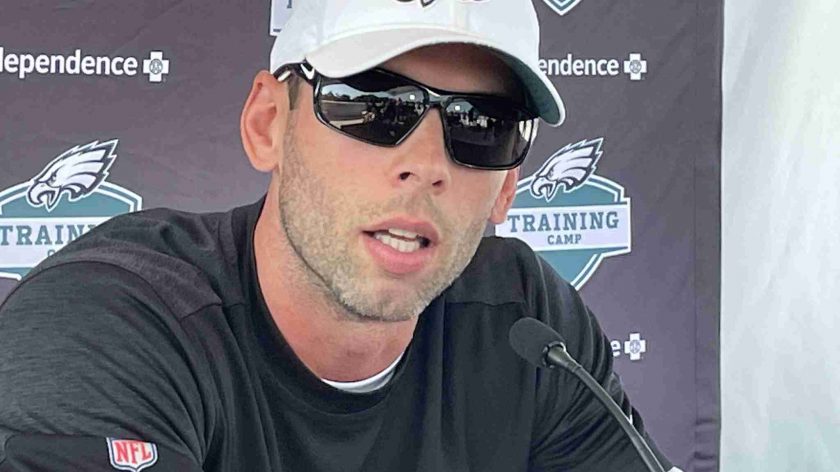 PHILADELPHIA – Nick Sirianni is always very aware of what’s being said about his team. At times the Eagles’ head coach likes to pretend that’s not the case but every now and again he slips.

One such moment came after the Eagles’ 17-16 win in Indianapolis during his contractually-obligated day-after radio appearance on 94.1 WIP.

“Assistant coach of the year, Jonathan Gannon?” the coach quipped with the understanding that the station ran the laughable poll of should Gannon be fired after an 8-0 start turned to 8-1.

After Philadelphia’s first loss to Washington, Gannon’s defense entered the Hoosier State as No. 3 in the entire NFL in total defense. Contextually that means two teams were better and 29 were worse so firing Gannon would make as much sense as the next call you hear from the Northeast.

“I stuck up for him because I believe in Jonathan Gannon,” Sirianni said Wednesday. “He’s a great football coach and you’ve continued to see the defense get better and better as he’s been here. And I get it, we all get it, we’re in a week-to-week league when it comes to some of these things. And we know that after a bad performance, they’re going to be calling for us. … We understand the waves of the season.

“… It’s been a great defensive performance throughout the year if you think about where we are in all the major statistical things.”

There were issues tackling in Detroit during the season opener and the third-down defense faltered in the loss against the Commanders but the biggest criticism has been the team’s lack of ability to stop the run.

Overall, Philadelphia is 19th in the NFL stopping the run, allowing 122.2 yards per game. The film points to a better unit, No. 9 according to Pro Football Focus. The disconnect is how the Eagles have decided to play defense which asks light boxes to persevere up front so that the team can utilize its quarters-based coverage scheme and limit as many big passing plays as possible.

The recent signings of Linval Joseph and Ndamukong Suh were about being able to continue that style, not changing the cost-benefit analysis of what wins in the modern NFL.

In fact, Gannon often lets fans in on this secret when he says “the easiest way to get beat in this league is the ball going over your head.”

Through 10 games, the Eagles have allowed 17 or fewer offensive points in eight games, which leads the league. Take out the Week 1 outlier and Philadelphia has allowed an NFL-best 14.8 points per game.

While others will be laser-focused on what Aaron Jones runs for on Sunday night or how many reps the defensive linemen get, the coaches will be worried about winning the two key battles that foreshadow surrender: turnovers and explosive plays.

Currently, the Eagles lead the league in takeaways and are No. 6 when it comes to limiting explosive plays.

As for the Gannon critics, be careful what you wish for.

“I just think he’s a special coach,” said Sirianni. “I’d love for him to be here the entire time I’m the head coach here, but I know that’s probably not reality.”