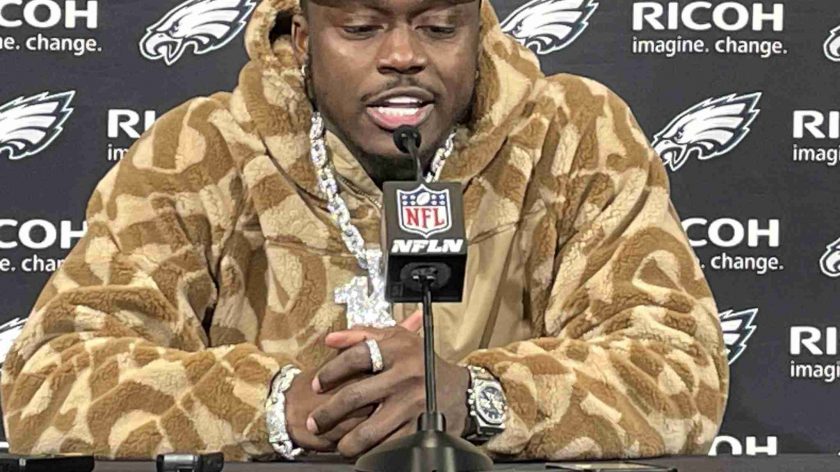 The only nitpicking during the Eagles’ 38-7 beatdown of the New York Giants in the divisional round of the playoffs came over the perceived reaction of star receiver A.J. Brown late in the game, who was caught by cameras looking a little unhappy after serving in a supporting role in the rout.

Brown, who finished the season with a franchise single-season record of 1,496 receiving yards, had just three receptions on six targets for 22 yards against the Giants in his first postseason game with Philadelphia.

That was tied to the Eagles’ offense playing more 12 personnel en route to piling up 268 rushing yards against the hapless New York defense. Brown played only 51 of the team’s 70 offensive snaps.

In the locker room, however, Brown was his usual jovial self while celebrating with his teammates.

Eagles coach Nick Sirianni was asked about the disconnect and pointed to an issue Brown played through in the game after banging up one side of his body.

“He was going through a little something with his body that was hurting him,” Sirianni said during his Monday press conference. “We feel like he’ll be ready to go this week, but he was hurting in that game.

The coach, a receiver himself in his college days at Mount Union, dismissed any ideas that Brown was unhappy with his targets and/or production but noted all good wideouts want the football.

“He’s always going to want the ball,” said Sirianni. “He’s a really good player. Not really anybody in the pass game really got a lot of targets or a lot of opportunities because we were running the ball so well. But that’s what you want from your receivers, to want to have the football.

“Part of the reason why receivers are good is because they want and crave the football. They want the ball to change the game.”

With the running game clicking on all cylinders, quarterback Jalen Hurts threw just 24 passes, connecting on 16 of them with DeVonta Smith getting the most traffic with six receptions on 10 targets for 61 yards and a nine-yard touchdown, which was sprung by a great Brown block.

“Make no mistake about it, [Brown] was thrilled that we won the football game,” Sirianni said. “Always wants to be involved, obviously, in the plan. He blocked his butt off, and you could see how excited he was when he sprang that block for DeVonta’s touchdown.

“But obviously he was really excited and celebrated in the locker room with all of us after the win.”