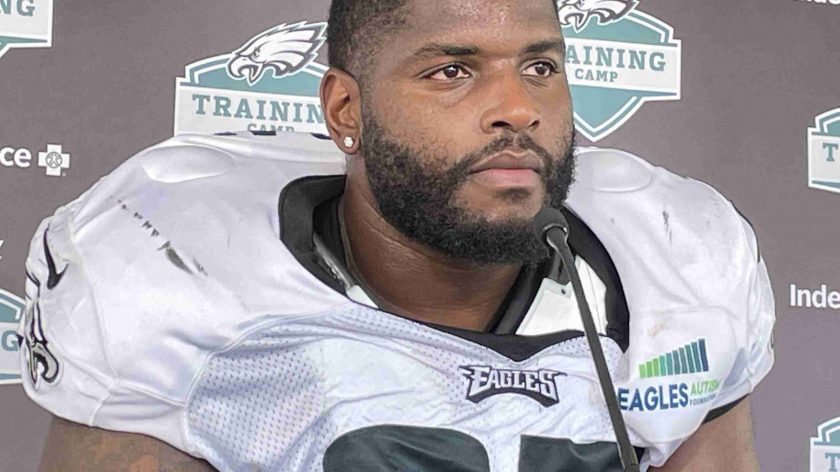 PHILADELPHIA – Week 1 without Jordan Davis didn’t go as smoothly as hoped but the Eagles persevered to top a bad Houston Texans team and move to 8-0.

Without the big man in the middle, however, the Philadelphia defense allowed 168 yards rushing, including 139 to impressive rookie Dameon Pierce.

As good as Pierce has looked during his first NFL season, the Florida product is hardly Jonathan Taylor or even Aaron Jones, two of the backs the Eagles must stop in the coming weeks before Davis is eligible to return from his stint on IR due to a high-ankle sprain on Dec. 4 against Tennessee. There is no guarantee that Davis will be back by then either because the estimated time to rehab a high-ankle sprain is 4-to-6 weeks.

The Titans, of course, have the most bruising back in the sport with Derrick Henry and from there the New York Giants, and the dynamic Saquon Barkley, are on the schedule twice in the final five weeks.

And all of this comes with the book now out on the playmaking but undersized Eagles defense — run, run, run.

“If the team is trying to pound you, you want to get another hat in the box,” defensive coordinator Jonathan Gannon said Tuesday. “You make sure that you’re not checkmated by the number count. With saying that, there’s some give and take to that, too, in the pass game. I think we’ll continue to work on, improve when we are in a light box, how we can be a little bit better, and then when we are in post close to really knock those runs down a little bit quicker and not have some yardage that kind of — you know, I always say, what doesn’t show up on the stat sheet is a three-yard run that goes for six, because it’s now 2nd and 4, not 2nd and 7. It’s a whole different game calling the game like that.

“Our guys know that, and we’ll work to continue to improve it.”

The Eagles essentially replaced Davis, who is the centerpiece of their odd five-man front, designed to limit the run game with gap-and-a-half responsibility with practice squad elevation Marvin Wilson (16 reps), along with some Javon Hargrave (10), and Marlon Tuipulotu (6). They also used more four-man fronts early with Fletcher Cox and Hargrave handling the interior until it became clear Pierce was going to be a problem.

“When you go back in and out of certain groups by situations, first, second down, things like that, depending on what they’re giving you, what personnel groups, the time of the game, what I’m thinking, what I think they’re thinking, it’s a challenge for our guys to click in and out of those calls and execute them at a high level,” Gannon admitted.

Head coach Nick Sirianni indicated last week that he’s happy with what the Eagles gave at DT even if it’s probably better equipped for the pass-rushing part of the game than run support without David.

“We’re confident in the guys that are there,” Sirianni said last Friday after the Texans game. “ We’ve always felt like that was a pretty deep room with Javon and Fletch and Marlon and Milton (Williams), and then obviously Jordan. Then Marvin off the practice squad. … we’re confident there. We were excited to see Marvin play and get some good reps in there, and so yeah, we’re confident in that group.

Having the extra time in what is a mine-bye week before Monday night’s affair against Washington should also help. The COmmanders have good but not great bacs in rookie Bryan Robinson and Antonio Gibson.

“Anytime you have a player of Jordan’s caliber, how he is against the run, and you’re without him, of course, that makes you not quite as good against the run,” Sirianni admitted. “But again, I felt like we need to put our guys in a better position, and when they were in those positions and be able to tackle better. It always starts with us as coaches putting the guys in better spots. We need to do that, and it starts with us as coaches.”