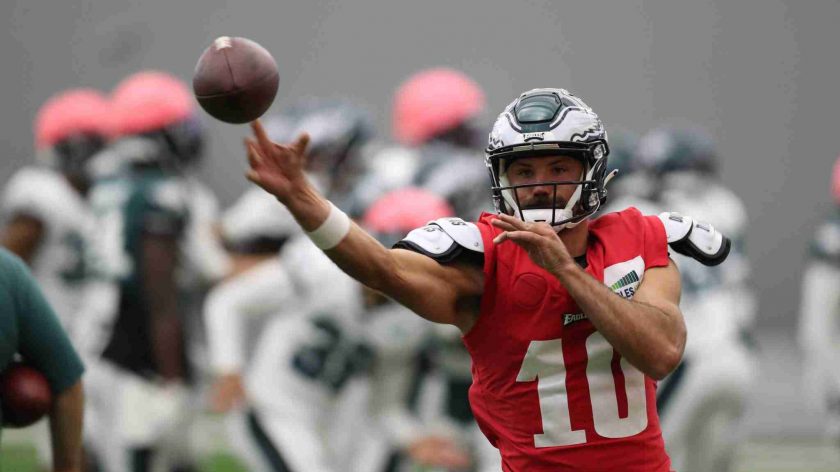 PHILADELPHIA − Dallas Goedert said he couldn’t remember the football hitting the practice field on Wednesday when Gardner Minshew took over the Eagles’ first-team offense for the first time as Jalen Hurts continued to rehab his sprained throwing shoulder.

While it’s not exactly a linear correlation the same almost held true just over a year ago when Minshew started his first game for Philadelphia against the New York Jets. With Hurts sidelined with an ankle injury, Minshew stepped in and was 20-for-25 for 242 yards and two touchdowns in a 33-18 win over the Jets.

His top target was Goedert, who had 105 of the receiving yards and both TDs.

Known for his quick processing skills and intermediate game, Goedert is again expected to be a big part of the game plan, perhaps alongside the bog-bodied A.J. Brown as the 13-1 Eagles try to continue their magical season by clinching the NFC East and the conference’s No. 1 seed at 10-4 Dallas with the backup QB.

Nick Sirianni pulled the plug Thursday on any thought of Hurts playing on Christmas Eve.

“It’s looking like it’s going to be Gardner,” Sirianni admitted. “Jalen did everything he possibly could to get his body ready to go, and just at the end of the day, he’s not going to be able to do it. Man, he tried like crazy and I know he still wants to go. That’s just the toughness [he has]. Jalen Hurts is the toughest player I’ve ever been around.”

Minshew is no run-of-the-mill backup having started 22 games over his first three professional seasons and amassing a more-than-solid 93.9 passer rating and an impressive 41 to 12 TD-to-interception ratio.

“He’s just a smart football player and he’s going to take what the defense gives him,” Goedert said when discussing Minshew.

The coach seemed confident in what he has in Minshew even though there was some virtual work Tuesday when Minshew was excused to attend and speak at his former college coach Mike Leach’s memorial service.

“With Zoom and the way you can video things, I mean, installs were videotaped. Zoom was available to him when he was available. Obviously, we can FaceTime him and talk through with clips and everything,” said Sirianni. “So there a was ton of communication back and forth while still giving Gardner time to be able to do what he needed to do to honor his coach that obviously he was very close with.

“We wanted to respect that obviously as well and he needed to be there.”

By Tuesday night Minshew was back in Philadelphia and then on the practice field by Wednesday where he wowed Goedert and others.

“[He] had a great practice [Wednesday]. I think you guys have all heard that, how good a practice he had yesterday,” Sirianni said. “A lot of energy out there. He’s ready to go.”

Goedert had visions of the Jets game flashing before his eyes.

“Maybe the Cowboys will be playing a little bit soft inside, worrying about DeVonta (Smith) and A.J. So hopefully, they forget about me, and (Minshew) can just dump it to me over the middle,” Goedert smiled. “That’ll be pretty nice.”

This season Minshew has only had a few cameos late in blowout games when the Eagles were trying to drain the clock. He’s just 2-for-4 passing for 34 yards yet few seem to douby Minshew will be ready.

“Everybody’s got a lot of respect for Gardner,” Goedert said. “He came in here after he was in Jacksonville, you know, ‘Minshew Mania.’ He kind of had that legend behind him. He came in here and didn’t disappoint. … He’s a little different in the best way possible, and I love that about him.

“He’s just got a lot of respect because he comes in here to work every day.”

“He’s what you want out of your backup quarterback, to be ready with limited reps,” Sirianni added.