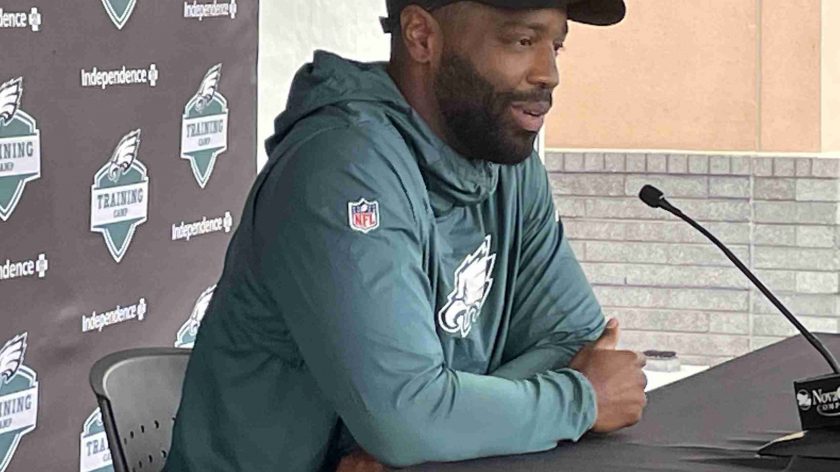 PHILADELPHIA – Holding steady to Nick Sirianni’s strict edict regarding competitive advantage, Michael Clay admitted to JAKIB Sports that he knows who will return the first punt Sunday against the Detroit Lions but the Eagles’ special teams coordinator wasn’t letting anyone in on the secret just yet.

“We have enough guys that we feel comfortable, so we’ll wait until Sunday at 1:00 when we kick off in Detroit,” Clay said on Tuesday.

The coach did throw at the list of players on the 53-man roster who fielded punts in practice this summer, a group that included Quez Watkins, Kenny Gainwell, Boston Scott, and Avonte Maddox. Meanwhile, the first Eagles unofficial depth chart listed Watkins as the PR1 despite having never returned one in an NFL game.

All of the options mentioned were taking reps during the summer behind Jalen Reagor, who was expected to be the punt returner until being dealt to Minnesota, and undrafted rookie Britain Covey, who was waived at the cut down to 53 before being brought back to the practice squad.

Scott is the only among the aforementioned four who has actually returned a punt in an NFL game, returning six to limited success in 2019.

Clay may have foreshadowed the most likely option — Covey as an elevation from the PS — when talking about the most important traits the returner must have.

“You want to have the vision and the feel like we say get a first down,” Clay said. “When we say get a first down that’s 10 yards, getting north and south, getting downfield, protecting the ball, making the first guy miss because there are guys out there in this league, there’s gunners out there that run 4.3, they’re going to make some guys miss on the outside but if we can make the first one miss and get a next level block, that 10 yards turns into a 20-yard return.

“So, making the first guy miss, catching the ball, and just giving that extra juice that may help propel the team to some momentum swings.”

The undersized Covey was a spectacular returner in college at Utah bringing back 92 punts in five seasons with the Utes. Last season, Covey returned 29 at a 14.7 clip with two touchdowns. He didn’t show much explosion at this level in August. What Covey did do, however, was look very sure catching the football and that wasn’t always the case, particularly with Watkins and Gainwell shagging punts with the help of receivers coach Aaron Moorehead.

“There are times out there when they’re catching the ball off a live leg or off the JUGs, Aaron Moorehead does a great job with the returners back there.

“Say it’s a punt day, he’s back there with the returners coaching them up, getting them confident enough to win with their feet, catching high hands, it’s a group effort,” Clay said.

Despite the uncertainty, Clay remains confident he’s got the tools at his disposal to have a successful return game

“We have enough guys where we feel comfortable enough when push comes to shove and we want to get out there and get some returns,” Clay insisted.