Jordan Davis is Quickly Fitting it with Eagles 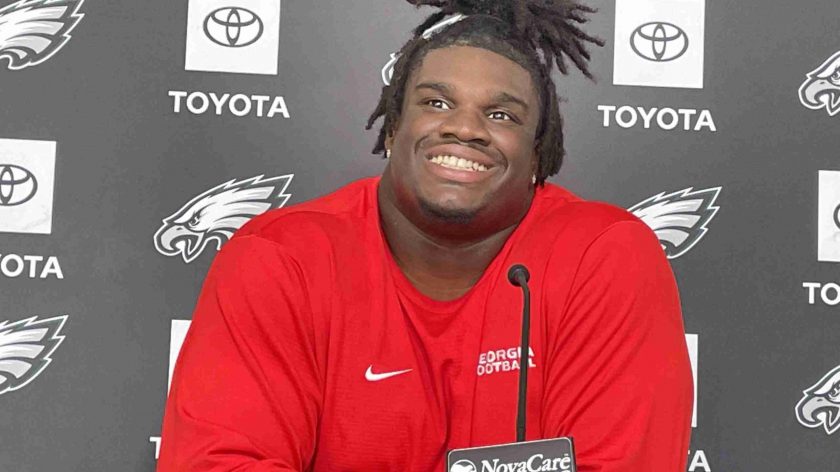 PHILADELPHIA – If Peter Clemenza was offering Jordan Davis some advice after the big man’s version of a hit — a tackle for loss — the Corleone Family underboss might say ‘stop the running back, then take the cannoli.’

Davis, the Eagles’ 6-foot-6, 340-pound first-round pick, flashed the personality to match his imposing size when talking to reporters last week at Eagles’ OTAs, particularly when the conversation turned toward the tasty Italian treat.

Considering his size and the cliched Philly cheesesteak trope, you knew the favorite food in town question was coming and Davis had a little more fun with it than most calling a cannoli from Dante & Luigi’s “to die for.”

“You can tell the culture up here is really heavy,” Davis, a Charlotte-area native who starred at the University of Georgia said, “and you’re going to get a good cannoli.”

Davis has got a ways to go before he can match Brandon Graham’s energy and upbeat nature but if there is an heir apparent to B.G.’s All Pro-level juice in the Eagles’ locker room, Davis might be the leader in the clubhouse.

“You can tell he’s a jokester,” Graham said. “[He’s an] old soul. He knows all the old school songs, he be singing, dancing. We gotta get on him a little bit, ‘You’re a rook, come on man, don’t come in here with all that.’ But we try to let him have his own personality.

Comfortable isn’t usually the word to describe any rookie in the NFL but sure enough, Davis sauntered up to the Eagles’ media tent last week, sporting his Georgia pride and a big smile before declaring “class is in session,” and opening things up to questions.

Perhaps one of the reasons Davis seems so comfortable is because he arrived in Philadelphia with his old tag-team partner from the national champion Bulldogs, linebacker Nakobe Dean, who was the Eagles’ third-round pick.

“I feel like both of us are comfortable, especially having each other,” Davis admitted. “We’re comfortable so our personalities when we get together will shine through. Regardless, I think he has the same mentality as me. We’re just going to be us no matter where we are and we’re going to have fun with it.”

Football is now Davis’ business but that doesn’t mean you can’t be happy at your job.

“Football is a fun sport,” he said. “It’s also a grind, but we just want to have fun every day. That’s just in life. You don’t want to go through life in a drag, not smiling, having fun, cracking jokes.

Back in rookie camp, Davis said he weighed 345 pounds and wanted to get into the 330s, understanding more reps are coming than his time at Georgia where the Bulldogs had so much talent they could come at lesser opponents in waves.

That landscape simply doesn’t exist in the NFL where everyone has great players and conditioning will be key for Davis. The Eagles’ are officially listing Davis at 336 pounds right now.

“I think I look a little bit slimmer,” Davis smiled while giving himself a once over. “I look in the mirror and I’m like, man, I’m getting toned. My arm muscles are looking good. My mom says I’m slimming down. My face is getting slimmer. I think that’s just the continuous work. It’s every day, it’s something.

There are no distractions at the professional level when it comes to the job description. It’s getting ready to play football all the time.

Dante & Luigi’s may be a little disappointed by that sentiment but Eagles fans should be ecstatic.