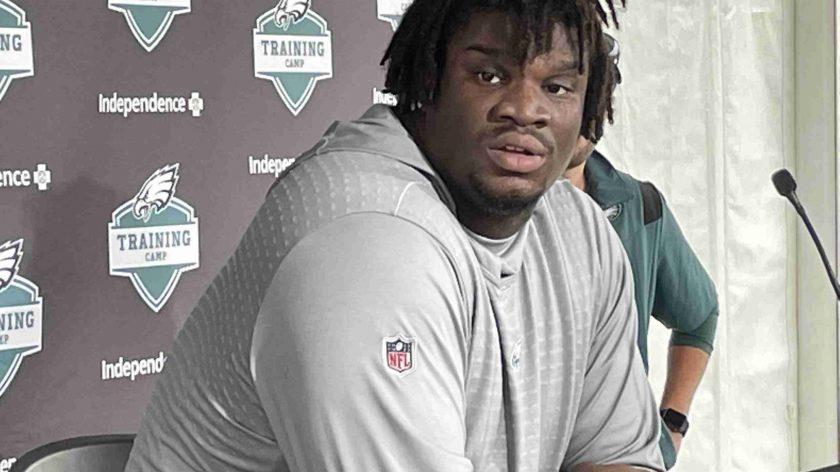 PHILADELPHIA – Context is always important and it was missing when a fan-clipped video from the Eagles’ recent open practice at Lincoln Financial Field went viral.

“I hate it, honestly,” the powerful rookie said. “I just feel like it shows — it’s very one-sided. You see one rep, but you don’t see Cam just blocking me, and getting me at practice, and getting me at the other reps. I always say, ‘Looks can be deceiving,’ so one rep and it goes viral, whatever, whoop-da-whoop.

“Cam is holding his own. He’s a very good player and it’s just good competition.”

Eagles’ offensive line coach Jeff Stoutalnd isn’t a big fan of one-on-one reps, not because they aren’t important, but because they are often played up as something more than they really are. It’s a drill tilted toward the defensive side to begin with and it’s one where a “loss” can be more beneficial for an offensive lineman than a win, at least if a teachable moment creates an epiphany.

If one-on-ones were the be-all, end-all Joe Ostman would be a multi-time Pro Bowl selection and Jordan Mailata would be back in Australia, perhaps launching a singing career but the big Eagles’ left tackle gives “Smokin’ Joe” all the credit in the world for helping Mailata sharpen his game en route to his massive $64 million contract extension last year.

If you were watching Jack Driscoll try to fend off Brandon Graham in one-on-ones this summer, you may find it hard to believe that Pro Football Focus graded Driscoll as a top-20 offensive guard last season when he was pressed into action.

Davis has been impressed with Jurgens, who is the Eagles’ starting center for at least the next month as Jason Kelce recovers from “routine” elbow surgery.

“Cam is strong. He’s stout,” Davis said. “He’s going to sit down, so you really have to make sure you can’t place your hands, really on both of them. It’s like a 1-2 tandem, so either way, you’re going to get a fierce competitor.”

And a player who is helping Davis get better each and every day.

“I’m here because I have ability, but it’s just getting better,” Davis said. “The game is evolving, no matter what. College is one thing, but to be good here is a different thing. I’m just trying to get to the point where I can be the same type of player that I was in college [in Philadelphia].”

The biggest hurdle for Davis is technique and the consistency in which you need to keep it at to be successful on a down-to-down basis.

The Eagles ultimately project Davis’ presence to open up things for the edge rushers and linebackers like he did at Georgia with another Eagles rookie, Nakobe Dean.

“I’d honestly say that two [blockers] on me, somebody [else] is free,” said Davis. “To be able to do that and have the guys looking at me to be an addition to the team, it makes me feel good. I feel like I’m bringing something and contributing to this team.