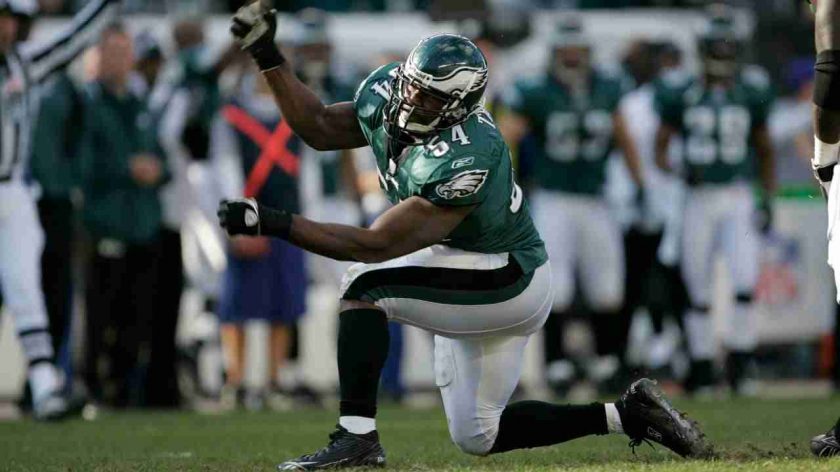 Former Eagles linebacker Jeremiah Trotter a.k.a. the “Axe Man” joined JAKIB Sports’ “Sports Take” on Wednesday to talk about his career, the upcoming 2022 season, and much more.

Trotter became one of the more popular Eagles in franchise history with his hard-hitting and bruising style of play. The linebacker position has been a devalued spot on the roster for a long time and Trotter’s status as a true downhill thumper is an endangered species in the modern game.

The former four-time Pro Bowl selection got the opportunity to discuss his career after arriving in Philadelphia as a third-round pick out of Stephen F. Austin in 1998 and quickly improved under the stewardship of legendary defensive coordinator Jim Johnson.

Trotter was tailor-made for Johnson’s aggressive style of defense as a downhill, shoot-the-gap player.

“You come in as a rookie, you learn real quick about the [Eagles vs. Cowboys] rivalry, the history, and what the game means to the fans,” said Trotter. “There’s so much animosity, hate, and a level of tension going into that game.”

Trotter, of course, saw some of the best Cowboys players in history during his time like Hall of Famers Larry Allen, Michael Irvin, and Emmitt Smith, and noted how Dallas has struggled to live up in recent seasons.

Trotter accomplished all he did in his NFL career despite entering the league with a balky knee which affected his draft status and proved to be a degenerative condition that often needed a brace.

That didn’t stop Trotter from the four Pro Bowls, two All-Pro berths, and an NFC championship on his resume before losing in Super Bowl XXXIX to New England, something that still bothers Trotter.

“It took me four or five years to even watch the [2005] Super Bowl . . . not just to get there, but knowing you had the team to win it,” said Trotter. “I was just so happy for the city of Philadelphia [after the Super Bowl LII win] . . . the fans are around for a lifetime.”

Trotter was ultimately inducted into the Eagles Hall of Fame in 2016.

Moving forward, Trotter said there is a lot to like about the current team and expects improvement from third-year quarterback Jalen Hurts.

“I think Jalen Hurts takes another big step this year,” said Trotter. “I think he’s gotten better every year, and I think he’s going to continue to get better.”

Defensively, Trotter made sure to highlight how special Nakobe Dean can be for Philadelphia. He can see Dean turning into a true difference-maker for the defense, especially with former college teammate Jordan Davis tagging along to engulf blockers.

“He has a very very high football IQ,” Trotter said of Dean. “He’s really good at running and tackling, and he’s gonna be to do a lot of that with those big guys in front of him. What he was about to do down there [in Georgia], he had an outstanding season and you can tell he’s really smart.”

Since retiring, Trotter has entered the real estate business where he helps to build and sell condos in the Dominican Republic for people and families in need.

Aside from that, he has spent time with family and has taught and encouraged his two sons to play football. Both Jeremiah Jr. and Josiah starred at LB for St. Joe’s Prep in Philadelphia and the former is now at Clemson while the latter has committed to West Virginia.