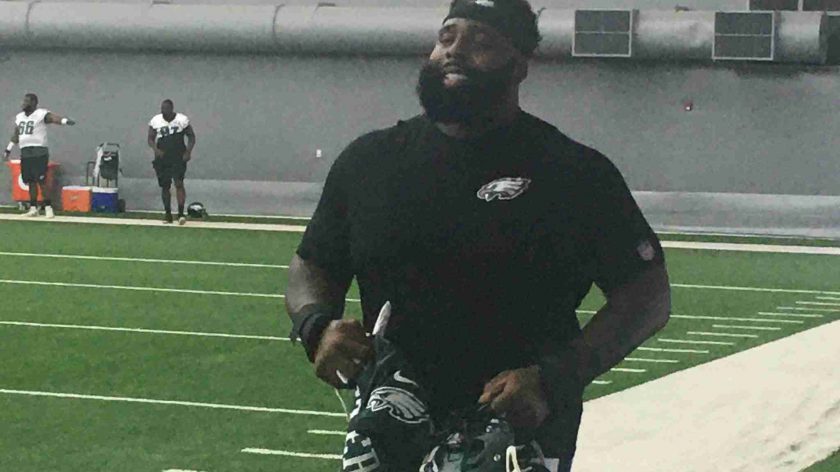 PHILADELPHIA – “This is 40” for the venerable Jason Peters looks like it’s going to be a homecoming for the nine-time Pro Bowl selection.

Peters is a Queen City, Texas native, a small town in the northeastern part of the Lone Star state just under three hours from Dallas if you’re getting into the car and it’s far closer to Arkansas where Peters went to college than AT&T Stadium.

The latter is likely going to be the latest stop for Peters, who keeps chugging along despite his advanced age. The Cowboys, who have lost star left tackle Tyron Smith for what could be the season, have quickly ascertained that rookie first-round pick Tyler Smith probably isn’t ready to protect the blind side of Dak Prescott.

At last word, Jerry Jones and Co. were deep in negotiations with Peters, who spent the majority of his Hall of Fame-level career with the Eagles after arriving in a trade with Buffalo in 2009.

His shadow as a player still looms large at the NovaCare Complex as both a leader and almost mythical figure among his former peers like Jason Kelce, Lane Johnson, Isaac Seumalo, and Brandon Brooks, the former All-Pro right guard who called it a career back in January at 32 because the injuries started to pile up.

At his own retirement press conference, Brooks took the time to rave about Peters.

“Jason Peters, especially amongst offensive lineman is larger than life,” Brooks said. “He’s got a famous line, he said ‘counting his Pro Bowls is like counting to 10′ and he’s absolutely right. For him to be able to do what he did for so long and is still doing, I mean it’s like walking into a room with somebody that’s larger than life. I don’t know how else to say it.

“… when I came here, just being around him, to soak up the knowledge, just to see how he played the game. I was just really in awe to see someone of his size do what he was doing. When I first got here in 2016 [when Peters was 34], we had to run sprints and JP’s a big guy and he was first in sprints, it was insane.”

Peters’ one-time Padawan, Jordan Mailata, is now on the verge of becoming an All-Pro left tackle himself.

“He will always be my mentor, taught me a lot in his time here,” Mailata said after a Thursday practice in South Philadelphia. “I’m forever grateful for him.”

Since leaving Philadelphia after the 2020 season Peters has been able to extend his career because it always seems someone in this league is desperate for competency at LT. Last season it was Chicago for Peters and now it looks as if it’s going to be back in the NFC East with the Eagles’ most heated rival.

Some Eagles fans are sure to be disappointed by Peters putting on “The Star” but it’s called show business, not show friends.

“Dude can still play,” Mailata said. “… I hope he can get the opportunity he wants. But I’m not surprised, it’s JP, man. The bloke can do it.”

Mailata did admit the sight of Peters wearing Cowboys colors isn’t going to look right, however.

“That’s going to be really strange,” Mailata admitted. “That’s the one thing I did think about was seeing him in a Dallas Cowboys outfit. It’s kind of weird.”