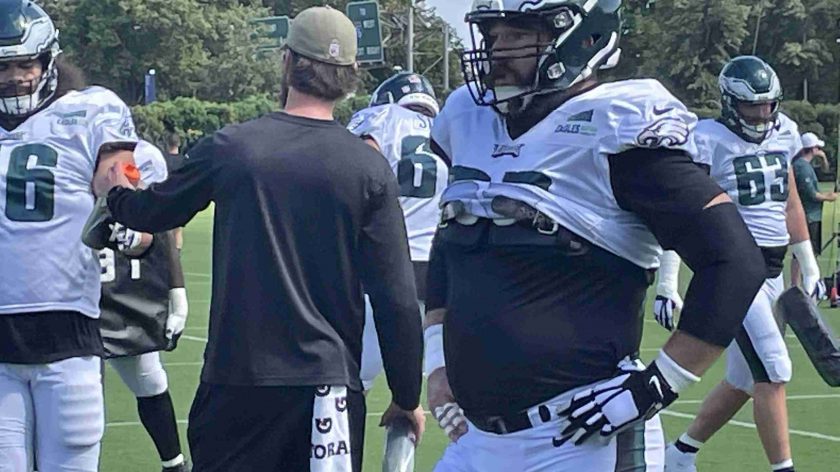 PHILADELPHIA – Take your expectations and shove them.

That’s the message All-Pro center Jason Kelce had Wednesday at the NovaCare Complex and he brought along the expletives to get it across as the Eagles ramped up preparations for the season-opener in Detroit on Sunday.

Kelce took control of his own narrative when asked a rather mundane question about his head coach Nick Sirianni and how much more comfortable he believes the now second-year mentor is feeling heading into Week 1.

“I don’t like comfort,” Kelce growled. “I think comfort is a f@#$ing terrible place to be if you’re in this league.”

Kelce then took aim at the suddenly surging expectations which have many predicting big things for a team that finished 9-8 last season and was routed in the playoffs by Tampa Bay.

“I know everybody expects us to be Super Bowl champions in Philadelphia right now, and I think that can definitely happen, but it’s not going to happen being comfortable, I can guarantee you that,” Kelce said.

Quarterback Jalen Hurts gave his trademarked rat poison definition when it came to the outside noise, something the young quarterback has continuously stressed can come from positive or negative feedback.

“It’s just a lot of rat poison, in short. It’s all external factors that we don’t want to (worry about) or be involved with,” Hurts said. “So it all comes back to pushing ourselves every day in practice, doing the little things that we need to do, to maximize the days and win the days, and to get better, you have to push yourself.

“That brings uncomfort. So when you build an environment, challenging, tough coaching, accountability from teammate to teammate, brother to brother, we get better.”

Hurts admits that’s not easy for everyone to do.

“I don’t think everybody’s built that way (to block out noise),” said Hurts. “Fortunately for me, I’m very familiar with this space. At Alabama and Oklahoma, we always have expectations, but that means nothing. Expectations are just something that you haven’t done, yet.

Kelce stressed a respectful nature to the process.

Kelce seems to almost prefer lower expectations because it creates a more conducive atmosphere when it comes to getting better.

“It’s like, ‘we gotta fix everything right f@#$ing now, otherwise we’re getting fired, otherwise people are going to be out on the streets,” he said.

Conversely, the higher the expectations, the more laissez-faire attitudes can get.

“When you win, it’s like, ‘ah, you know, was that a bad play?” Kelce said. “Those 50-50 (things)…it goes a little bit by the wayside. I think when you’re expected to do well, organizationally, player-wise, team-wise, coaching-wise, all of those little things start to be like, ‘ah, you know, we’ll get that fixed.’”

Kelce is still positive, though, that the Eagles won’t buy into the hype because of the veteran leadership that has seen and done it all, players like himself, Brandon Graham, Fletcher Cox, and Lane Johnson.

And Kelce is hoping all the cursing goes viral so the younger players in the Eagles locker room catch onto the mindset that can actually turn expectations into tangible results.

“I’ve been probably saying some semblance to that to guys and people throughout the offseason. I haven’t been that direct about it, so maybe a video clip will come out, and they’ll see that,” Kelce said.