Jason Avant on Jalen Hurts: ‘The best leader at quarterback that I’ve ever seen’ 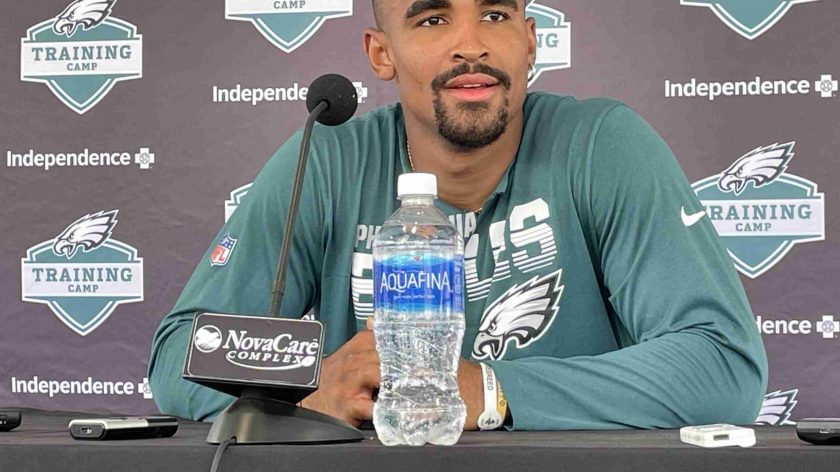 Avant grew into becoming a fan favorite because of his consistent and reliable performances as a receiver in Philadelphia. He played eight seasons with the Eagles where he compiled 3,646 receiving yards on 317 receptions and 12 touchdowns.

After being released by the Eagles, Avant spent time with the Carolina Panthers and Kansas City Chiefs until retiring in 2015. Since retirement, he has remained busy running the Launch Trampoline Park which features trampolines and other forms of entertainment for children. He has done what he can to give back to the community that embraced him for so many years.

Avant then went on to briefly talk about his career and specifically his impact on the DeSean Jackson punt return in the Miracle at the Meadowlands II. While Avant’s block was his most memorable imprint of the play, there were plenty of other aspects to it.

“It’s the most memorable block, from most fans’ perspective,” said Avant. “There were a couple of other blocks in there, Omar Gaither knocked out three people in one block.”

After reminiscing about some of the best moments in his career, Avant provided some necessary insight regarding DeVonta Smith. His comments highlighted how Smith’s productivity will undoubtedly go up in just about all areas of his game.

Smith’s rookie gave him a taste of what the NFL is like, and Avant believes his maturity and preparation will continue to improve.

“His efficiency is going to go up,” said Avant. “It’s not about the catches that you make, it’s about how many yards per catch that you can average, and that equates to wins.”

Avant also discussed the impact that A.J. Brown will bring to Philadelphia, using the insight as a former receiver to explain what makes Brown special, comparing him to a game-changer like Anquan Boldin

“You just don’t find guys like that anymore that have that much on the game,” said Avant. “A big guy that is that strong and can shake tackles like that, they have tremendous balance.”

Receivers need a vehicle to get them the football, however, and that’s Jalen Hurts in Philadelphia, a young, ascending quarterback.

Avant believes the offenses Hurts learned in college did not prepare him very well for the Philadelphia offense, but the Oklahoma product vis Alabama has shown that he can learn and adapt.

As a dual-threat quarterback, Hurts’ ability to effectively use his legs makes him dangerous. Yet, being able to cycle through his receivers’ routes, and not always rely on running, will set him apart.

While Hurts has room to improve and progress, Avant praised his leadership qualities and his impact on the team. He grouped him in with several great leaders that he has been around, including Nick Foles and Alex Smith.

“He’s definitely the best leader at quarterback that I’ve ever seen…” said Avant. “If you meet him, you want him to win.”

Avant made sure to get across that he has high expectations for Philadelphia, as he views this team as a top ten roster. Although much of the team’s success is contingent upon Hurts playing well, this coaching staff still has plenty to prove.

Eagles defensive coordinator Jonathan Gannon was put on the spot, as well as Nick Sirianni. Avant explained how Gannon has just about all the tools to turn this group into a top defensive unit, so there is little to no excuse why he can’t succeed.

“You should be able to put your players that you have in good enough positions in order to get results,” said Avant.