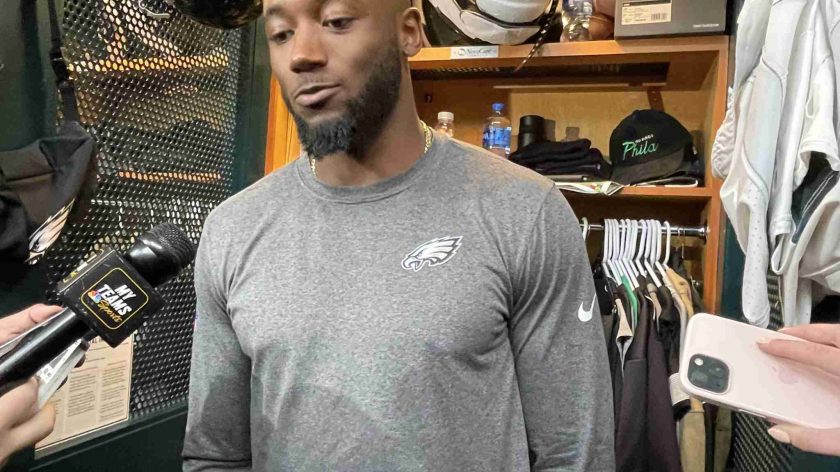 PHILADELPHIA – A.J. Brown took care of Tennessee to the point some believe it was the tipping point for the Titans’ firing GM Jon Robinson despite being in first place in the AFC South.

James Bradberry isn’t going to give Giants’ first-year GM Joe Schoen his pink slip no matter how the cornerback plays against his old team in MetLife Stadium on Sunday no matter what happens.

For that reason and many others, Bradberry didn’t think the situations were comparable when talking earlier this week.

“[Brown] was a receiver that was looking to get paid by them,” said Bradberry. “I don’t know the situation with the organization but he didn’t end up being paid, he got traded. Me on the other hand, it was a decision caused by the salary cap.

“I got released because of the salary cap, and we weren’t winning.”

A former Pro Bowl player in New York, Bradberry landed on his feet and is having a career season in Jonathan Gannon’s zone-heavy schemes with three interceptions, 14 passes defended (second in the NFL), a 46.0 passer rating allowed (second), and a 45.5% completion percentage allowed (third).

If Bradberry is looking for revenge he’s sure hiding it well perhaps because the best revenge is living well.

“I mean, what’s our record right now?” Bradberry rhetorically asked reporters. “I’m 11-1. So really, I’ve been focused on playing for the Eagles. I really haven’t been worried about the Giants, but I am excited about playing a divisional game and competing, and hopefully getting a win.”

Team success is important for Bradberry because he developed into a top CB with Carolina and the Giants but didn’t often have good teams supporting that play.

“When I first got [to New the Giants in 2020], I thought it was going to be a better team with me. We didn’t do that, so I’m glad to be part of the Eagles right now,” the cornerback said. “…I have come to peace with it. Us winning a lot of football games has helped me with that. I’m part of the Eagles. We’re winning. And I’m trying to keep that going.”

He and Eagles’ Pro Bowl CB Darius Slay have been the top duo in the NFL through the team’s 11-1 start.

“I think when I was in Carolina and we drafted Dante Jackson, I think me and him complemented each other well, just like me and Slay complement each other,” said Bradberry. “It was a little bit of that when Adoree (Jackson) got to the Giants, with me and him. Of course, it was a different scenario because it takes a team to win a football game, and we just didn’t have the team to win games.”

The Giants are better this year even without Bradberry and are currently a playoff team, standing at 7-4-1 with five games to play.

A pending free agent after the season, Bradberry is set to turn 30 in August. He understands the fit in Philadelphia helps him but also realizes that his career year might provide one last opportunity for a big-money deal.

“Winning is definitely a part of the decision for me, but there are more variables, too, that I really don’t want to get into,” said Bradberry. “But that’s one of them, for sure.”