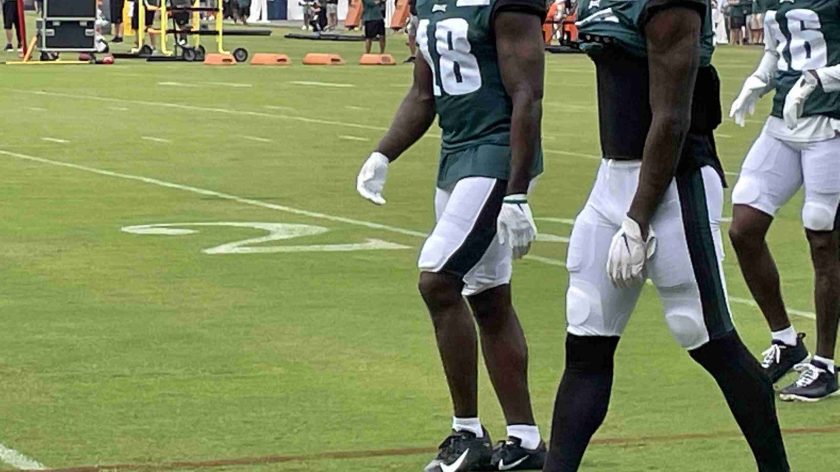 Eagles’ third-year receiver Jalen Reagor has dealt with plenty of adversity on the field but that pales in comparison to what the 2020 first-round pick has had to get through off of it.

For the second consecutive offseason, Reagor is mourning the passing of a very close friend after learning that his former college teammate, Jeff Gladney, was tragically killed in a Dallas-area car accident in the early hours of Monday morning.

Reagor and Gladney were both first-round selections out of Texas Christian University in 2020, with Reagor coming off No. 21 overall to the Eagles and Gladney getting selected 10 picks later, No. 31 overall. by the Minnesota Vikings.

“Lost my Brother, my best friend, my right hand man… ain’t too much more I can take,” Reagor wrote on social media. “R.I.P Jeff Gladney, brother watch over me please.”

Over the summer last year, one of Reagor’s closest childhood friends was killed and the Waxahachie, Texas native missed the first three days of training camp while grieving.

“That was like a little brother to me. It was hard to deal with,” Reagor admitted last August.

Gladney was off to a solid start as a rookie in 2020 with the Vikings but was released in April of 2021 after he was indicted on allegations that he assaulted his girlfriend. He was ultimately found not guilty on those charges and was set to re-start his career with the Arizona Cardinals.

We are saddened by the tragic death of former Viking Jeff Gladney. Our hearts go out to his family and friends, as well as the Arizona Cardinals organization and Jeff’s current and former teammates and coaches who are mourning his life lost much too soon. pic.twitter.com/5bdVCXT6Gv

Reagor, meanwhile, is expected to enter training camp with the Eagles despite persistent trade rumors that have surrounded him in the offseason.

Currently, Reagor is behind the newly-acquired A.J. Brown, DeVonta Smith, Quez Watkins, and free-agent pickup Zach Pascal on the depth chart but there is a feeling that Reagor could push Watkins for the WR3 role if things ever click. Reagor was also the Eagles’ top returner last season in both kickoffs and punts and that could be a path to contribution as well.

The NFL family mourns the tragic loss of Jeff Gladney and we extend our deepest condolences to his family and loved ones. pic.twitter.com/FgN5T62q3I