Jalen Reagor Embraces the Challenge in Front of Him 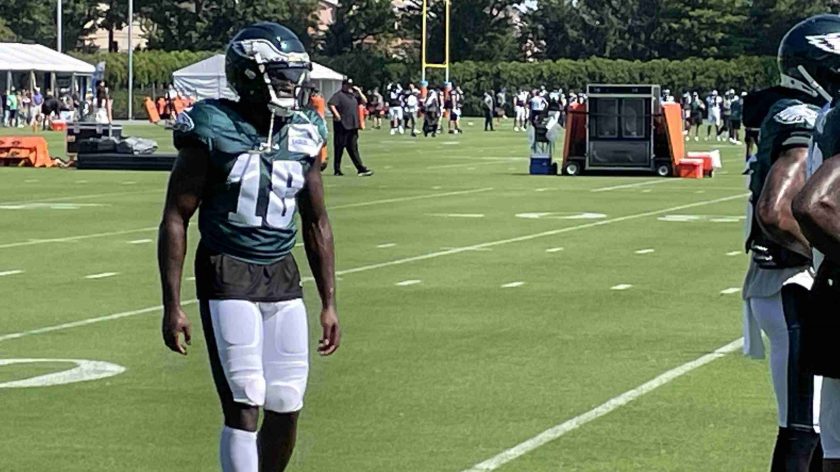 PHILADELPHIA – It wasn’t supposed to be this way for Jalen Reagor, a dynamic playmaker in college at TCU who arrived in Philadelphia billed as the playmaker the Eagles’ offense desperately needed.

The Eagles, of course, chose Reagor at No. 21 overall in the 2020 draft at the behest of the coaching staff, one spot ahead of LSU star Justin Jefferson, who was misevaluated by the organization as primarily a slot receiver.

Fast forward two years and Jefferson is an NFL superstar with his first two professional seasons being historic from a statistical standpoint with 3,016 receiving yards, over 1,500 a season for those who enjoy math. Reagor, meanwhile, has a total of 64 receptions for 695 yards over the same span.

In the offseason, coach Nick Sirianni, who wasn’t here when the Eagles selected Reagor, defaulted to talking about new acquisitions A.J. Brown and Zach Pascal to go along with incumbents DeVonta Smith and Quez Watkins when it came to the receivers and his passing offense.

Once a projected foundational piece, Reagor had become an afterthought.

To the Texas native’s credit, though, he’s doing all he can do when you’ve been written off.

Last year, the first under Sirianni, Reagor showed up not ready to go and failed a conditioning test after a death of a close friend hit him hard.

“That was like a little brother to me,” Reagor said at the time. “It was hard to deal with.”

This offseason, Jeff Gladney, a former TCU teammate of Reagor, who the receiver had called his “right-hand man,” died tragically in a car accident.

Although difficult Reagor handled things much better this time.

“I think the big thing with Jalen is from two years ago to last year to now mentally he’s in such a better space,” receivers coach Aaron Moorehead said. “… We’ve had no issues this year. Like with the stuff that happened last year, you know, kind of came in out of shape. I mean, he came in in as good a shape as anybody in the whole camp this year and it shows by the way he’s played.”

“I would say last year it was me dealing with a lot, so I just wasn’t really just focused on my training,” he said. “This year, even dealing with a lot, it just motivated me more, especially because that’s my best friend [Gladney], that’s who I trained with. It just made me go even harder. And then I just didn’t worry about anything else.”

Reagor has taken advantage of first-team reps he wasn’t expected to get this summer when Pascal missed some time with food poisoning, Watkins battled a short illness, and Smith suffered a groin injury, something that has cost the second-year star five practices and counting.

In Friday night’s preseason opener against the New York Jets, Brown will likely get only a cameo and Smith will miss the game, again leaving plenty of reps for Reagor to continue his redemption story.

Reagor understands what this summer means to his career whether it continues in Philadelphia or in another city via trade.

“I want to be here for the rest of my career,” the young receiver said. “But I mean, it’s a business of production. So, I’m gonna handle my end, and I’m going to let them handle theirs.”

Sirianni admitted early in camp that Reagor is battling for a role on the offense and days of double-digit touches he once got at TCU are over with the presence of Brown and Smith. The goal for everyone down on the depth chart is to make the most out of opportunity when it arises.

“I think just that transition, just having all those targets into maybe you only got a couple opportunities per game, and he had to get used to that adjustment,” Moorehead said. “But you know what? Like every guy in this room, he has a responsibility to be a pro, and being a pro is knowing your role and understanding that that role changes. At any given time that role can change.”

For now Reagor is saying all the right things.

“I’m just gonna make them three a damn good three,” Reagor said. “… I love a good challenge. So, it’s a humbling experience because you know, you go from being a first-rounder to battling.