Jalen Hurts on playing at less than 100%: ‘It takes what it takes’ 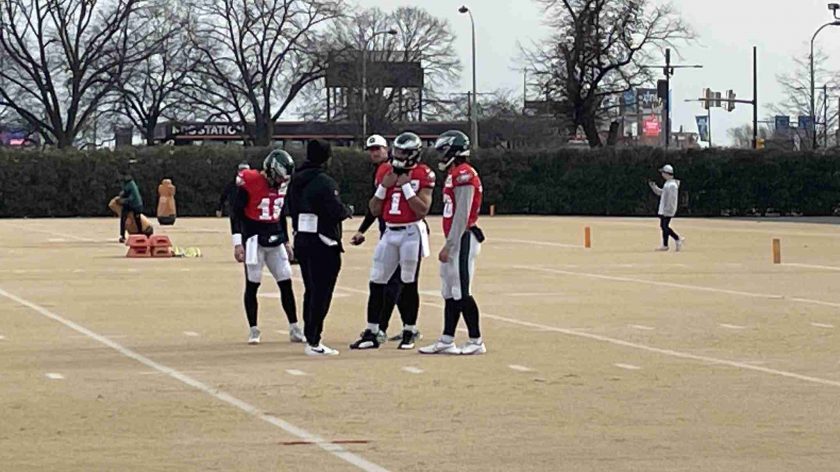 Outlandish proclamations of healing faster than everyone else might still be true but if that’s the case Jalen Hurts’ sprained SC joint on Dec. 18 in Chicago was more serious than anyone thought.

With the benefit of hindsight even intimating the Eagles’ QB1 could be ready six days later for Dallas was wasting a competitive-advantage card and the attempts at increased subterfuge on New Orleans eight days later fell on deaf ears.

The Eagles’ original goal was to persevere and get one win against the Cowboys or Saints with Gardner Minshew at the controls, something that would have enabled Hurts to rest his shoulder until the divisional round of the playoffs set for the weekend of Jan. 21-22.

Consecutive losses forced the Eagles’ hand and a limited Hurts was back in the lineup for Week 18 against the junior varsity of the New York Giants, and the Pro Bowl selection got it done despite his worst game of the season with the zone-read mechanics that define the Philadelphia offense put on ice.

Post-game and on Tuesday, coach Nick Sirianni expressed just how much Hurts was ailing.

On Thursday, Hurts was again limited at a bye-week practice in which he threw sparingly and skipped ball-security drills.

The actual injury, described as an SC joint sprain by multiple NFL sources, is an uncommon one compared to the more frequent AC joint sprain. A Grade I SC joint sprain generally takes one to two weeks to heal and a Grade II – believed to be what Hurts suffered – has a two-to-three week timeline.

A Grade III sprain is the most serious version of the injury when all the ligaments within this region of the shoulder suffer trauma, often resulting in the shoulder becoming separated in most cases.

There is no evidence that Hurts separated the joint or suffered a broken collarbone yet he’s also past the two-to-three-week range and still “hurting like hell.”

“We are fortunate that we have two weeks until the next time we play,” Sirianni said. “He’s going to be a little bit healthier than what he was obviously the other day.”

Hurts had his lowest-graded game of the season against the Giants, according to Pro Football Focus, completing 20 of 35 passes for 229 yards with a red-zone interception, while adding just 13 yards on the ground.

It’s conceivable and perhaps even likely Hurts will be somewhat limited again in the divisional round without the game plan restrictions utilized against a lesser foe who wasn’t even playing its’ best players.

The angst in Philadelphia is real and for once, maybe it should be.

Hurts was asked about playing at less than 100%.

“It’s different. It’s not the first time I’ve done it, though,” he said. “It’s happened a number of times. I think this has been a very public venture. But I’ve been able to navigate that. I have no problem with doing that. That’s the thing I have to kind of get my mind right to do. It takes what it takes.