Jalen Hurts ‘delivers’ for Eagles in win over the Colts 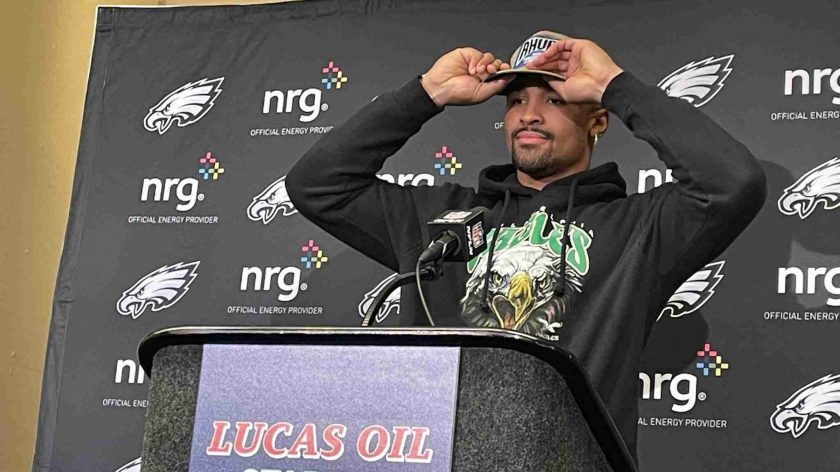 INDIANAPOLIS – To the outside world, Nick Sirianni tried to downplay his return to Indianapolis but it wasn’t exactly a secret around the NovaCare Complex how badly the Eagles’ head coach wanted this one.

If you needed evidence of that it came pouring out after Jalen Hurts found the end zone with just 80 seconds to go and Brandon Graham made a sparse 17-16 edge hold-up with a big sack of Matt Ryan on the Colts’ final possession.

Sirianni erupted and tried to celebrate with every Eagles fan who made the trip. On his way back to the locker room, the coach was visibly emotional as he hugged GM Howie Roseman, who himself was validated in a different way when his off-beat, in-season, thirtysomething street free agents, Linval Joseph and Ndamukong Suh, Balled out during their first opportunity.

Sirianni had this one circled, hoping to square off with his mentor Frank Reich and things soured when the former Eagles’ offensive coordinator was jettisoned by owner Jim Irsay, something Sirianni, and most of the profession to be honest, thought was unfair.

“I’m emotional because I love Frank Reich,” Sirianni admitted. “… You don’t wanna know what I think of if he should be here or not, because you can imagine what I really think. And I love him. So I got a little bit emotional about that.”

Sirianni considers Reich to be one of the three mentors who turned him into the Coach of the Year candidate he is now with an NFL-best 9-1 record.

“He’s one of the best damn football coaches I’ve ever been around,” said Sirianni. “So, I was hoping that him and I would be able to coach against each other in this game. He’s one of my biggest mentors. I got my dad, I got (former Mount Union head coach) Larry Kehres and I got Frank Reich.”

Others knew it as well, like Graham and former Colts receiver Zach Pascal even though Sirianni tried to temper things earlier in the week noting any road game in the NFL features players or coaches having a homecoming.

It wasn’t easy, though, especially offensively as the Eagles’ sputtered much of the day without Dallas Goedert, at least until Hurts diecided to take over the game with his legs in the fourth quarter.

“I wonder what Dallas is thinking right now,” Hurts smiled. “I know he didn’t travel with us, but probably screaming at the TV, going crazy. I think we have a lot of trust in everybody on the team. Regardless of the circumstance, regardless of the situation, whoever is on the field, there is never a doubt, because we work so hard, we put a lot of work in. I’m thankful that today we were able to kind of get paid for the work we put in this past week, and in the crucial moment in the game you had guys stepping up and making plays, offensively, defensively, and that’s how you win big-time games. It doesn’t really matter how you start but, it’s about how you finish.”

Sirianni was seemingly pressing a little bit with his decision-making, almost trying to scheme up the loss of his star TE which probably isn’t possible delaying the adjustments to “what we felt was working at the time,” according to Sirianni.

The eye-raisers were going for it on fourth-and-10 from the 39-yard line in the third quarter, a curious wasted timeout when Haason Reddick saved the game with a sack of Ryan with 4:42 remaining before a Chase McLaughlin field goal that gave the Colts a 16-10 advantage.

The second timeout came out of the two-minute warning on a fourth-and-2 from the Colts’ 9-yard line when the Eagles lined up with their always effective QB sneak package hoping to draw Indy offsides and get the free first down. Had the Eagles failed to convert the game would have been sealed for the Colts but Hurts saved Philadelphia with a brilliant three-yard run after looking like he was initially bottled up.

Hurts is quickly becoming the Eagles’ eraser with his off-schedule offensive abilities making up for mistakes.

After the Eagles’ MVP-level QB delivered the win he stayed on the clock like an Amazon driver. There was one last stop — a game ball for the coach who wanted this one a little but more.

“I’m glad we were able to get a win for him,” said Hurts. “I know as he walked off the field he got a little bit emotional. I guess I didn’t help when I tossed him the ball. Coach doesn’t get enough credit for what he’s done and what he’s been for us. He does a great job. Happy he got to get this win.”