Jack Stoll is Holding Off the Competition at TE2 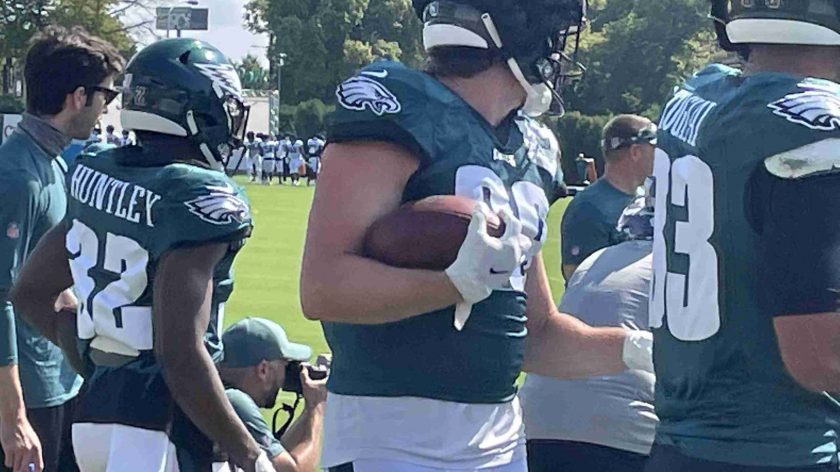 PHILADELPHIA – When it comes to the tight end position and who is going to backup emerging star Dallas Goedert, the Eagles might want to take some advice from Mick Jagger and Keith Richards.

For over 50 years now, The Rolling Stones have been belting out “You Can’t Always Get What You Want.” with the kicker being “if you try sometime you’ll find you get what you need.”

While the Eagles try to get what they want in the form of a healthy Tyree Jackson or Grant Calcaterra, or even the attempted shift of J.J. Arcega-Whiteside, second-year player Jack Stoll may be again proving he’s what the Philadelphia coaching staff needs.

The trade of Zach Ertz to Arizona last October not only cleared that path for Goedert to be the TE1 in Philadelphia, but it also elevated Stoll, an undrafted rookie out of Nebraska, into more playing time than expected, 331 offensive reps to be exact, 30% of the team’s total.

The 6-foot-4, 247-pound Colorado native provided yeoman work as a blocker but little help as a receiver which is why the Eagles are trying to uncover every rock in an effort to find an upgrade.

The odds are stacked against Stoll because Calcaterra should be back from his hamstring injury relatively soon, Jackson should be cleared from a torn ACL suffered in Week 18 last season by September, JJAW still has that second-round draft pedigree. You can also throw in Noah Togiai, who has had a pretty good camp with increased opportunities, and old reliable Richard Rodgers.

To date, though, Stoll is still TE2.

“I’m doing whatever to help the team win at this point,” he said.

Stoll understands that he needs to be more of a receiving threat to protect his status. As a rookie, he had just four receptions for a paltry 22 yards.

“Obviously, every tight end wants to be able to do both,” said Stoll. “But like I said at the end of the day as long as I’m here helping the team win ball games, trust me, I’d rather win every single game than go out there and have a catch every single game.”

Stoll is also cognizant that his blocking skills are what brought him to the dance.

“I think last year I knew my niche was going to be blocking,” Stoll said. “That’s how I was going to make the team, so that was my emphasis.”

As a true two-way TE. Goedert is one of the best in the business in both phases so maybe the Eagles go piecemeal when in 12 personnel. If Nick Sirianni and Shane Steichen want their star flexed, Stoll may be doing the dirty work inside. If the coaches want Goedert in-line, perhaps that’s how a Calcaterra or Jackson, when healthy, get playing time.

Stoll’s ultimate goal, though, is to prove he can do both.

“As the year went on I realized I can develop into being able to catch the ball,” said Stoll. “That’s what I focused on in OTAs and this offseason was developing a little more fast twitch, coming out of breaks faster, and really becoming an all-purpose tight end. That’s the goal at the end of the day.

“I feel I’m progressing well, but still a lot I can learn. Having a guy like Dallas Goedert in the tight end room, you can just sit there and watch what he does is unbelievable.”