It’s not official but expect Dallas Goedert back in Chicago 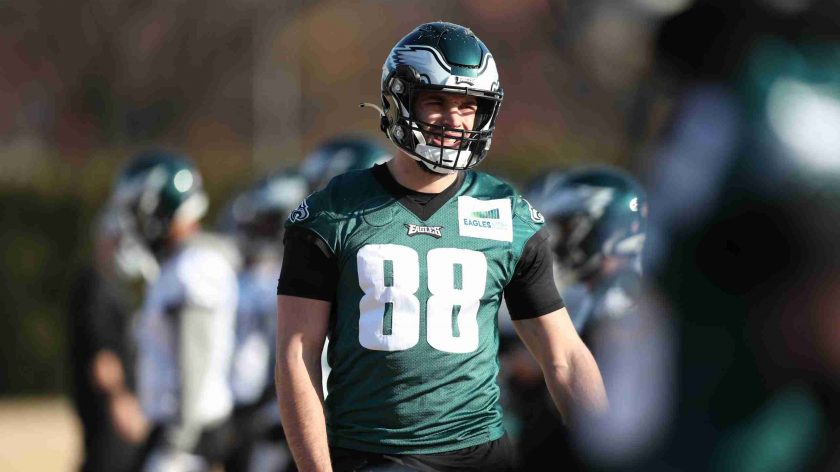 PHILADELPHIA – The Eagles are an NFL-best 12-1 with the No. 1 scoring offense in the league and they are about to re-integrate one of their best players into the mix.

The Philadelphia offense is expected to get back star tight end Dallas Goedert on Sunday in Chicago. The Eagles officially opened his 21-day practice window on Wednesday before a walkthrough practice after a four-game stint on injured reserve tied to a fractured glenoid in Goedert’s shoulder suffered during the team’s only loss of the season to Washington on Nov. 14.

Like Avonte Maddox last week, if Goedert makes it through practices on Thursday and Friday with no ill effects he’s expected to be activated Saturday for Sunday’s game in the Windy City.

“It’s still up in the air but things are trending in the right direction.,” Goedert said about his potential return. “I gotta go out and practice and see what it feels like full speed and blocking bigger people than the trainers. “If I was playing (the trainers), I could play for sure. Some of these guys (in the NFL) are a little bit bigger and a little more forceful coming at me.”

Thoughts that the Eagles should wait one more week to make sure Goedert is available for the Christmas Eve game against division-rival Dallas are not a consideration.

“Even though the Bears only got three wins, they’ve lost a lot of close games. They’re not a bad team, that’s for sure,” said Goedert. “We’ve got to be ready to go when we get there. Obviously, I definitely want to play in Dallas. But you know, every game is important. When you sit on the sidelines, you want to get back as soon as possible.”

In Goedert’s absence, backups Jack Stoll and Grant Calcaterra, a rookie, held up well as Philadelphia was a perfect 4-0 without one of its best players. In the first three games of Goedert’s absence the Eagles played a lot more 11 personnel (three receivers) but saw something against the New York Giants and used much more 12 (two TEs with Stoll and Calcaterra).

“You just see he is a scrappy guy and you’re seeing that more and more.,” head coach Nick Sirianni said when discussing the rookie. “He really has this ability to snatch the ball and then get in and out of breaks. I think he’s got receiver qualities, but then he can do enough in the run game, and he has been.

“This is new for him because in the sense of this, on this team, when we were running 12 personnel sets, it was usually with Dallas and Jack. Now it’s with Jack and Grant, and Grant has done a really nice job. Grant is coming along, and we’re seeing some of the special receiver qualities of why we drafted Grant, but then we’re also seeing how he’s developing in the run game, which is really important, obviously, for tight ends to have, that we keep them balanced, and you can’t get any tells when a guy is on the field.”

Now that Goedert is back, Calcaterra recedes into more of a luxury but don’t be surprised if there is a play or two here and there to take advantage of his receiving skill.

Goedert, on the other hand, will be a big part of things as one of the receivers Jalen Hurts trusts the most.

“Obviously I had to miss the four (games), and I wanted to come back as soon as possible,” Goedert said. “And here we are, and things are in a good direction. Obviously, my activation period got started, so hopefully, all goes well this week.

“It was a bummer, but the biggest thing for me is that injuries happen, and when I knew it wasn’t season-ending, I just knew that I’d do whatever I could to get back, and get back to full speed before the playoffs start – now that we clinched. It’s really just trying to get back into the groove of it, just being able to run routes. You’re out for four weeks, and it takes a little bit of time to get back.”