Inside the career day of Miles Sanders 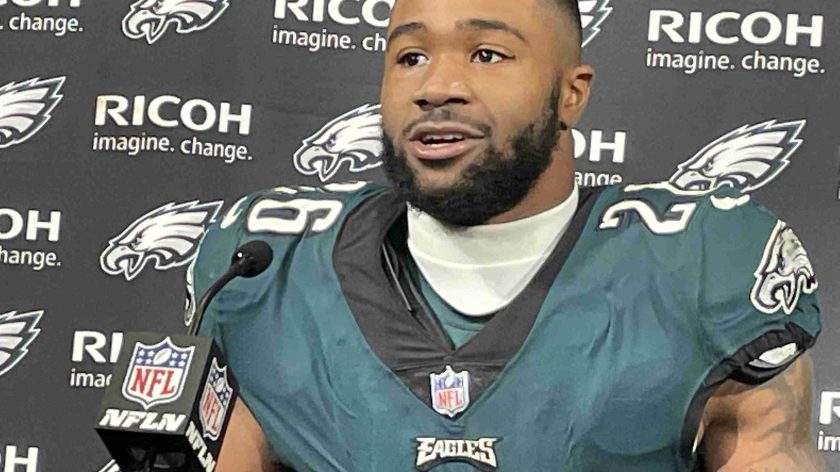 PHILADELPHIA – Miles Sanders was the first Eagles player led to the postgame interview room, still sporting his drenched uniform after a career day in difficult conditions.

“You hear that party going on in there?” Sanders smiled while referencing the music booming and voices celebrating a 29-21 win over Doug Pederson and the Jacksonville Jaguars.

The 4-0 Eagles are the only unbeaten left standing in the NFL and they accomplished it driving rain and difficult winds despite starting slowly and facing a 14-0 deficit.

“And it was muddy right there.”

Sirianni’s answer to the muddiness was hitching his wagon to Sanders, who put up career-highs in carries (27) and yards (134).

“We’ll do whatever we need to do to win the football game,” Sirianni said. “Of course, conditions are going to play into that. We look at everything. We take everything into account. We were running the ball really well.”

Sanders’ previous career best was 131 yards last season against Washington, and his traffic was the most since Dec. 5 of last year against the New York Jets. The Penn State product’s two touchdown runs — from 10 and 5 yards out — also matched a career-best with all of it accomplished against the NFL’s top-ranked rushing defense entering the game.

The Jags arrived in Philadelphia allowing 55 yards per game on the ground and coming off games in which they shot down the league’s reigning rushing leader, Indianapolis’ Jonathan Taylor, and the versatile Austin Ekeler of the Los Angeles Chargers.

The Eagles put up 210 overall and Sanders made sure to mention the dominance of his offensive line which was even more impressive when you consider that starting left tackle Jordan Mailata left with a shoulder injury after only six offensive snaps and right guard Issac Seumalo, who dominated the interior, along with Jason Kelce, missed the final 20 reps with an ankle injury.

Already missing Mailata’s planned backup Andre Dillard, the Eagles turned to Jack Driscoll, who played left tackle for the first time in his career, and held up to the point Kelce called him the player of the game. Sua Opeta took the baton from Seumalo and finished up at RG after playing some at left guard the week prior as Landon Dickerson fought through a foot injury.

“We have a mentality – it’s a next-man-up mentality,” Sanders said. “And we have probably one of the best offensive line coaching in the league coaching these guys. So whoever’s next man up is going to produce in there, no matter who is in there. … With the weather being the way it was, we leaned on our offensive line, and our offensive line had a heck of a game.”

“That second quarter, our offensive line was rolling,” Sirianni added. “And that’s a good defensive line. I’ve known that going back to my Indy days that that’s a really good defensive line. But our offensive line, I’ll take them over anybody in this league. I love that group. They are gritty. They are grimy. They are tough. They are physical. And we had to play some guys today. You can see how good of a job that (Jeff Stoutland) does of developing guys and getting guys ready to play that might not play. Jack Driscoll, Sua, those guys stepped in and did a really nice job.”

Sanders admitted to JAKIB Sports that getting the extra touches — only one RB reached 27 carries through the first three weeks in the entire NFL — helped him get into a groove.

A Western Pennsylvania native, Sanders also pointed to the weather as an advantage for him.

“I know half the league is people from the South, and when it gets cold, Southern people don’t like to tackle,” Sanders joked. “But I like this type of game.”

“I think Miles ran really hard today,” quarterback Jalen Hurts said. “Miles protected the ball. Everybody protected the ball. He made plays. You see him running up the diagonal route, cutting across the field. He played angry, in my opinion. He played with a purpose. He deserves it. He had a hell of a game.”

A hell of a game that puts the Eagles in a position to take the next step.