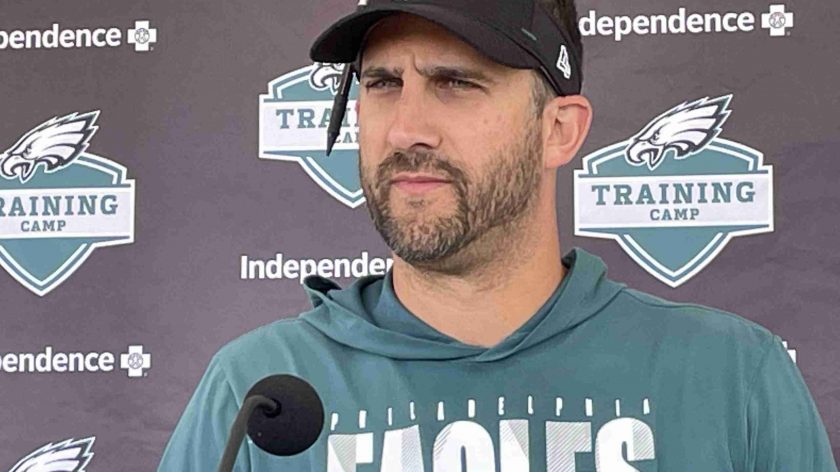 Anyone who’s played competitive basketball — be it structured or even pickup games — knows the feeling.

“I have it on tape, I showed it to the [team],” Eagles coach Nick Sirianni said when reminiscing about his own opportunity at walk-off glory as a high-school hooper in Western New York. “I fade away, and it looks so pretty.”

There would be no celebration, though, for Sirianni.

“It stuck between the backboard and the rim. And the camera zoomed in on it,” the coach smiled. “I’m like, ‘OK guys, this was an embarrassing moment.'”

Sirianni was sharing this painful adolescent moment with his football team because it was a teachable one when the context was added.

At the time Sirianni had gone from role player on a very good team to key contributor after a few seniors graduated. It was his first opportunity to take the baton and run with it. The Hollywood ending wasn’t scripted in real life and Sirianni had two paths he could have taken: let it bother him or turn the page.

Sirianni is always thinking about ways to get his message across. The core values he preaches don’t change but the second-year coach understands that the ways he gets them across have to or the “students” will ultimately stop listening.

“I think you find ways to make it fresh and different, but the core values are still the core values,” Sirianni said. “When I’m taking my walks around [his South Jersey home], that’s what I’m thinking about.

“How can I tell this story a little bit differently? And then it’s just the art of picking a story when it fits.”

Sirianni’s art has already famously incorporated gardening and his love of sports documentaries, particularly with respect for the legendary competitiveness of Philadelphia-area native Kobe Bryant.

Recently, Sirianni was immersed in an ESPN “30-for-30” documentary on the famous Tuck Rule Game that arguably kickstarted Tom Brady’s run in New England.

The Pats of course tied the game against the then-Oakland Raiders in the final minute of regulation and ultimately won in overtime due in large part to the questionable call before going on to win its first of six Super Bowls.

“It was all about how the Raiders could not overcome the fact that the referees messed the call up in their minds,” Sirianni said. “And then you hear the Patriot players saying, ‘Well, if that would have happened to us, [head coach Bill] Belichick would have said, ‘Get that out of your head and play.’”

Bad call or not there were plenty of opportunities for the Raiders to still win the game.

“[The Patriots] still had to drive down the field and make a play,” Sirianni said. “[Kicker Adam] Vinatieri still had to make a kick and all these things. So that will be my messaging with that.”

Control what you can control is a football cliche that might be greeted with rolling eyes unless accompanied by a real-world example.

The so-called flower analogy, which included a video of roots growing underground, did not go over well outside the NovaCare Complex when Sirianni revealed it to reporters. The Eagles were coming off an ugly 33-22 loss in Las Vegas and many were questioning if the rookie head coach was overmatched or not.

Multiple team sources, though, confirmed to JAKIB Sports that it went over like gangbusters to its intended audience, and sure enough, Philadelphia rebounded to blossom into a playoff team.

“It was just staying in the moment, and I think that’s what I learned from it,” Sirianni said about the 2-5 start and the criticism that accompanied it. “I think when you look at it that way, you can handle the criticism, you can handle what looks to be an unclimbable mountain.”

Moving forward the flower messaging or the Dawg Mentality T-shirts might not work as well but Sirianni is always thinking about ways to tweak his lesson plans.