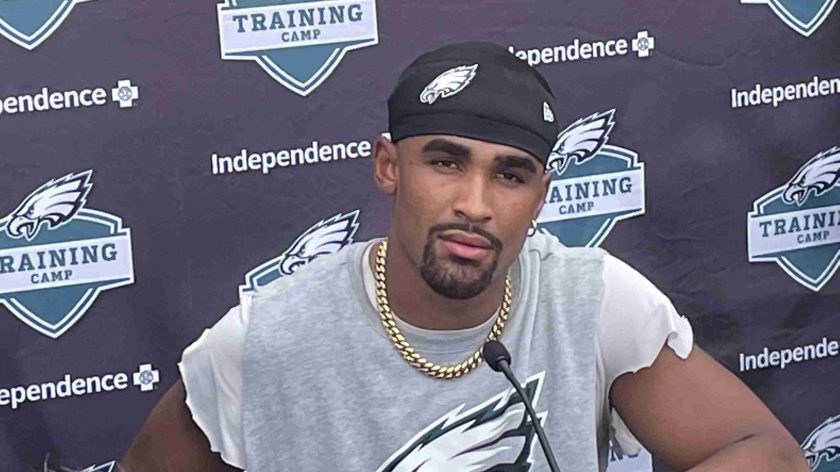 MIAMI GARDENS, Fla. – To the outsider, it was pedestrian, a practice session filled with checkdowns and a conservative approach. To the ultimate insider, it was a sight for sore eyes.

Jalen Hurts practice on Wednesday against the Miami Dolphins will likely be the last time the third-year quarterback sees an unfriendly face until Sept. 11 in Detroit because Thursday’s scheduled session was scaled back to an intrasquad practice after a stomach virus started to cut through the Dolphins’ locker room a little too quickly, and the Eagles’ key players are not expected to play Saturday night in the preseason finale at Hard Rock Stadium.

If that sentiment holds, Hurts ended on a high note, according to Nick Sirianni.

“[It] was the best practice he’s had as an Eagle since I’ve been here,” Sirianni told reporters before a Thursday practice where the defense got the better of the offense in a session with heavy red-zone work.

While the splash plays weren’t there on Wednesday, Sirianni was impressed by a quarterback who is starting to trust what he sees and move through his progressions in a methodical fashion.

Like most young QBs, Hurts has too often gone from intent to off-schedule far too rapidly.

The Dolphins were taking away the explosive plays on Wednesday and Hurts went where the defense was dictating the QB go.

“What he was doing with the football and being able to go through reads and the progressions that fast and getting the ball to where it needed to go, I thought, was unbelievable,” said Sirianni.

The young specifically pointed to a third-down play where the top progression was a slant to star receiver A.J. Brown, but Miami jumped the route and forced Hurts into another direction, a pre-snap audible to backup tight end Jack Stoll.

Later another attempt to Brown was stifled and Hurts toggled to DeVonta Smith down the field.

“I’m not sure on all the times I’ve ever been a part of that play, I’ve never seen the ball go there and Jalen found it and figured out how to get it there,” Sirianni explained. “It was just happening. Everything was happening so quick for him – not quick for him – actually it seemed like everything had slowed down for him and he was getting the ball out on time.

“And I just thought he was at the top of his game. And that’s a great development for us.”

Hurts was asked for his take on the practice on Thursday.

“You know, he’s looking at it in terms of me doing my job,” the QB1 said. “And that’s what I strive to do every day. Go out there and just do my job and just be consistent, I think [Wednesday] was very consistent. So, we’re just chasing growth, chasing growth every day.”

In many ways, the modern NFL has morphed from the old-school thought process of full-field progressions to a more scaled-down philosophy of teaching concepts instead of plays. In the Eagles’ offense Hurts is usually working with three progressions before things go off-schedule but a good pash rush could change classroom theory into real-world chaos at the drop of the hat.

From a coach’s perspective, though, understanding the tools the offense is giving you is the biggest part of learning how to be an NFL QB.

Hurts’ vaunted work ethic is getting him closer to the ultimate goal each and every day.

“One thing I know, I think y’all understand is, is nobody has a higher standard for myself than me,” the QB said. “So, I’m never going to ride waves, I’m never gonna get too high or low, I’m just gonna stay consistent in my approach. My work ethic and attack every day.”