In the end, Jalen Hurts and Tua Tagovailoa are both winning 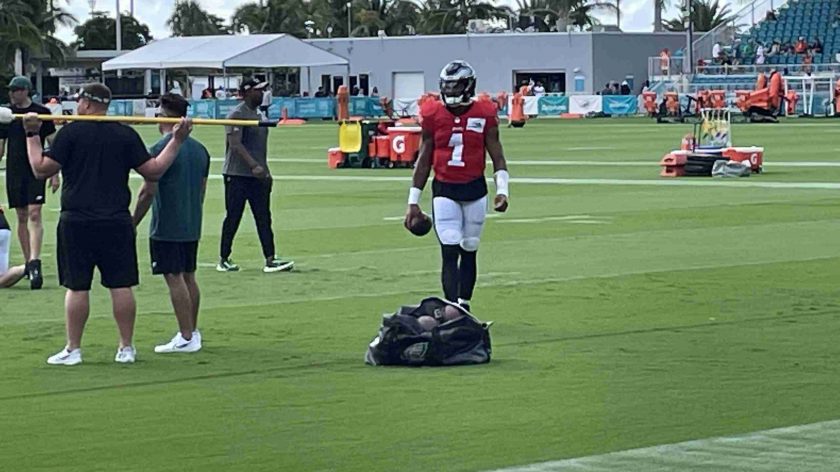 That’s been a thing since Jalen Hurts and Tua Tagovailoa called Tuscaloosa home.

Despite presumptive acrimony of players competing together for one position, however, that’s simply never been the case for the two former Nick Saban signal-callers.

The story of Tagovailoa and Hurts is a well-known one with the former taking over for the latter for the Crimson Tide when Saban felt Tua offered a little bit more at a program where one loss can be considered a crisis.

Hurts handled his demotion at Alabama well and ultimately made the best of the situation by transferring to Oklahoma and becoming the Heisman Trophy runner-up in his lone season with the Sooners. In fact, the Eagles’ QB1’s ability to handle adversity at such a young age might be the foundation of his now well-cultivated reputation as a leader.

The two QBS remain friends to this day but didn’t really have time to chat in advance of the joint practice between the Eagles and Dolphins in South Florida on Wednesday.

Hot it was and Tagovailoa’s Dolphins matched the temperature especially when he was throwing the football to Tyreek Hill, who sliced and diced the banged-up back end of the Philadelphia defense which came in without James Bradberry, Josiah Scott, and Josh Jobe and lost Darius Slay in-session to some kind of leg injury.

Whether he was being political or not, Tua said he was impressed.

“I think their defense looked good,” Tagovailoa said. “Obviously, it’s a little different with the climate change, and I do understand they just got done with a game in Cleveland and they just went back to Philly then had to come here to Miami and practice.

“I think they did a great job coming out here, showing us some really good looks. They gave us some opportunities to have to really execute well on offense.”

Remember practice is about the work. No one is game-planning for anyone else.

Hurts didn’t talk to reporters after the session but is expected to speak following Thursday’s practice where he will no doubt get questions about Tua.

Today it was Tagovailoa’s turn.

“So, it really tells you how he goes about his life. It tells you about how he kind of sees things, how he looks at things, and obviously he’s a competitor, he never wants to be last. That tells you a lot about him.”

Tagovailoa admitted the two don’t see each other much in the offseason as their paths as professionals take them in different directions but texting remains a common occurrence.

“I remember last season we were texting each other quite a large amount,” the Dolphins’ QB1 said. “For me, when I ended up playing the Saints, he played the Saints prior. I texted him about that. He gave me some tips.

“He texted me about playing another team, I gave him some tips.”

It’s not hyperbole. Competition can be healthy.

“I think that was cool. I know our relationship with me and Jalen is not going to go anywhere,” Tagovailoa said. “… regardless of how many times we talk throughout the year, throughout the week, or if we don’t.”